Dall sheep and mountain goats are the charismatic, white-coated grazers of Alaska’s high mountains, denizens of some of the most spectacular country on the planet. Most of the state’s estimated 50,000 sheep and 30,000 goats inhabit remote terrain far from human byways and are generally difficult to see up close without climbing into alpine zones. But both species can be viewed at a distance by scanning certain open slopes—usually where whole mountain faces are visible at a glance—most often when vegetation can provide a backdrop to their fur.

There are two dramatic exceptions to this rule! Dall sheep will venture close to the highway at Windy Corner on Turnagain Arm near Anchorage, sometimes grazing a few yards from parking. Mountain goats will sometimes descend close to sea level in outer Resurrection Bay, Harriman Fiord of Prince William Sound, and on Southeast Alaska headlands, visible to people on marine wildlife tours.

Where Should You Go First?

30 mins from Downtown Anchorage along the Seward Highway

The premier spot to view wild Dall sheep in Alaska (and maybe the whole continent) looms over one of the state’s busiest highways south of Anchorage. Windy Corner often concentrates sheep on craggy faces just above the road. It’s not uncommon to see a half dozen sheep perched on cliffs in two or three spots, or grazing in patches less than 100 feet above. On rare occasions, the sheep actually venture right down to the highway. Alaskans regularly slow down and scan the terrain when driving past, and then zip into the pullouts when they see animals. A short and somewhat steep walk up the Turnagain Arm Trail will sometimes offer a different vantage of sheep not visible below.

40 Mins from Downtown Anchorage along the Seward Highway

The 3,000-foot slopes of Penguin Ridge overlook the Turnagain Arm south of Anchorage, providing habitat for both Dall sheep and mountain goats—one of the few places where the two species overlap. For best viewing opportunities, visit Bird Point Wayside of Chugach State Park. Extensive, multi-level observation decks feature panoramic vistas and spotting scopes. For best results, scan snow-free areas below ridgelines for white specs, then confirm with binoculars. Once you find grazing sheep or goats, use a spotting scope to zero in on single animals.

Dall sheep can sometimes be seen grazing on the slopes above the Middle and South Forks of Campbell Creek on the Anchorage Hillside in Chugach State Park. These animals will often appear as white specks in distant alpine meadows. From the Glen Alps trailhead, walk a half-mile to Powerline Pass Trail and use binoculars to scan below ridges across the valley, especially during spring and summer mornings.

Another productive area for sheep looms over the Eklutna Lake in the grassy south-facing bowls beneath Twin Peaks at the top of the strenuous 2.6-mile Twin Peaks Trail. It’s easiest to use binoculars or a spotting scope from the shoreline near the Eklutna Campground. But hikers can access the slopes for better views.

A popular stop for wildlife viewing in general, this shallow, productive lake in the Kenai Mountains nestles between two immense faces that rise 3,000 to 4,000 feet above the valley floor. The slope to the northeast sometimes draws both mountain goats and Dall sheep into the open, one of the few places where both species overlap. The animals will be visible to the naked eye as white specks on the distant alpine tundra.

More than 4,000 mountain goats roam the backcountry of the Kenai Peninsula, most often in the craggy, glacier-rimmed slopes that overlook the Gulf of Alaska. The western coast of outer Resurrection Bay near Seward offers the state’s best opportunity to see wild goats up close, with animals often perched on ledges and crannies just above the sea. In fact, the goats are so common and easy to find that guides have nicknamed the stretch between Caines Head and Callisto Head as “goat alley.”

Goats are also not uncommon along the strenuous Harding Icefield Trail by Exit Glacier in Kenai Fjords National Park, but you will probably have to climb hundreds of feet to find them.

5 hrs from Anchorage by car, 8 hrs by train. Bus Tour or Shuttle Inside the Park

Several thousand Dall sheep inhabit the high mountains in the eastern and western regions of the park, with several promising viewing sites accessible from the 92-mile Denali Park Road. In general, they feed and rest on windswept ridges and steep tundra slopes, while using rocks and crags to avoid predators. Venture out early on a bus tour or the national park shuttle and go as deep into the park as you have time for. Use binoculars and scan periodically for their white forms against the tundra. Also watch for the park’s other marquee mega-fauna: brown bears, grey wolves, caribou and moose.

Noted Spots Along the Park Road

2.5 hrs northeast of Anchorage along the Glenn Highway

This spectacular ridge dominates the Glenn Highway for almost 15 miles, climaxing one of the state’s most scenic mountain drives. The massif—about 120 road miles northeast of Anchorage—feels immense and wide open, with great vistas of its 3,000-foot slopes possible from just about any place along the highway. The terrain lives up to its name, too. These south-facing slopes can concentrate large numbers of sheep that are especially visible after green-up in the spring. Lodges in the area provide spotting scopes and good advice, and there are several pullouts and trailheads with safe parking. To preserve its extraordinary sheep viewing potential, the whole area has been closed to sheep hunting since before Alaska statehood.

5 hrs northeast of Anchorage, 2 hrs South of Fairbanks along the Richardson Highway

Dall sheep are easy to see on this very striking, postcard-worthy ridge that parallels the Richardson Highway for a few miles in the Alaska Range about 150 miles south of Fairbanks. With bands of rust-colored rock alternating with talus fingers and tundra, the terrain is almost perfect for showing off the white dots of grazing sheep. Winter winds also tend to clear the slopes, making the animals visible all year round, especially on the mid-level slopes above the brush zone. The ridge—including the 6,550-foot Rainbow Mountain—is also known for fossils and two rock glaciers slowly creeping downslope toward the highway.

7 hrs north of Fairbanks on the Dalton Highway

Some of the best sheep viewing in the world looms over the gravel James Dalton Highway as it traverses this 4,739-foot pass through the Brooks Range and then descends toward the Arctic coastal plain. Sheep can be found along sweeping open slopes between the pass and Galbraith Lake, with best chances of seeing activity between May and September. Ewes give often give birth near the lake, while the pass area is known as a rearing area for lambs. Overall prospects for other wildlife viewing are fantastic, with good chances for caribou, Arctic foxes, musk ox and migrating birds.

Dall sheep and mountain goats can be elusive, especially when wet or stormy weather descends to obscure the view. Even a visit to Windy Corner on Turnagain Arm—where sheep regularly appear—will sometimes prove futile. If you don’t mind seeing animals under human care, you’re always in luck! 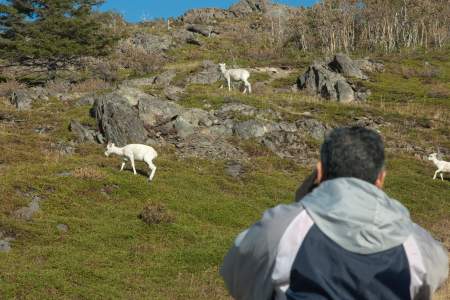 The pre­mier spot to view wild Dall sheep in Alas­ka (and maybe the whole con­ti­nent) looms over one of the state’s busiest high­ways only 20 miles south of Anchorage.

The 3,000-foot slopes of Pen­guin Ridge pro­vide habi­tat for both Dall sheep and moun­tain goats 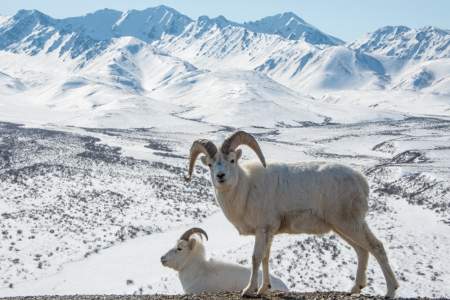 The 3,000-foot slopes of Pen­guin Ridge pro­vide habi­tat for both Dall sheep and moun­tain goats — one of the few places where the two species overlap. 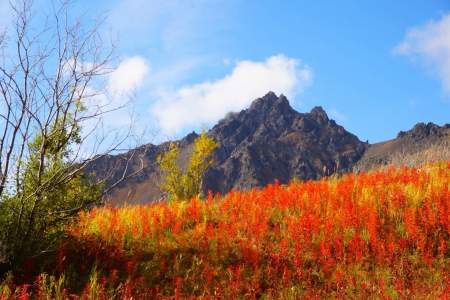 This trail quick­ly gains ele­va­tion on its way to an alpine mead­ow framed by the dra­mat­ic Twin Peaks and Goat Rock, but climbs to mag­nif­i­cent views over­look­ing the entire val­ley. Dall Sheep are often spot­ted above the tim­ber­line. From here there is a spec­tac­u­lar view of the lake below. This is also a good place for berry pick­ing in the fall. Because of the crushed rocks, the trail is hard­ly ever muddy. 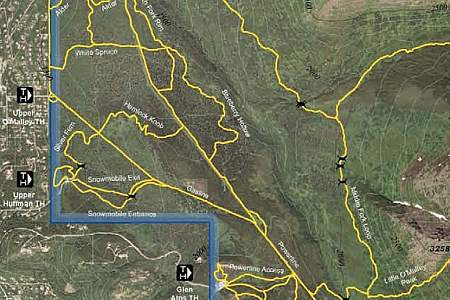 Get a close-up look at Alaska’s most famous ani­mals, and lis­ten to our free audio guide dur­ing your visit 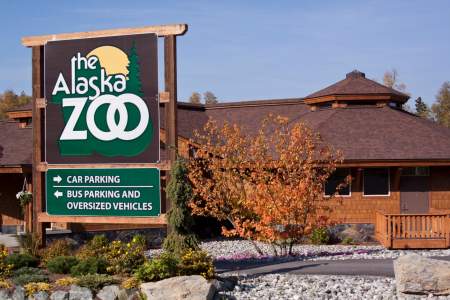 The Alas­ka Zoo start­ed in 1966 with one baby ele­phant named Annabelle that was won in a con­test. Since then, it has expand­ed to include over 77 ani­mals across 25 acres of the Anchor­age hillside. 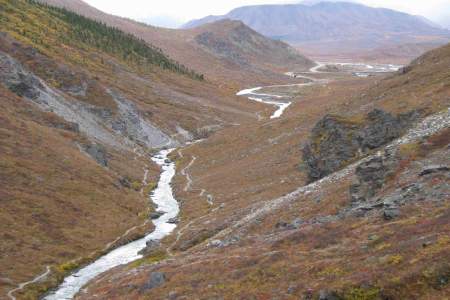 Either dri­ve your own car or take the free shut­tle 15 miles out the park road to the Sav­age Riv­er check sta­tion. This is a pop­u­lar hik­ing trail, and you won’t be alone, but at least you’re away from the entrance area and enter­ing the true wilder­ness of Denali Nation­al Park. This is a tun­dra walk on a devel­oped trail that fol­lows the riv­er. Good hike for kids, with pos­si­bil­i­ty of see­ing Dall sheep, mar­mots, and cari­bou. You can do a loop walk,  ...more 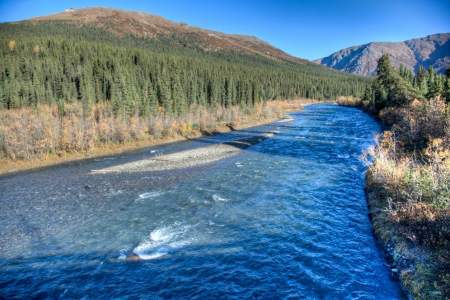 This is an unmarked, unmain­tained trail and can be dif­fi­cult to fol­low, but is a good exam­ple of the real out­doors in Denali Nation­al Park. 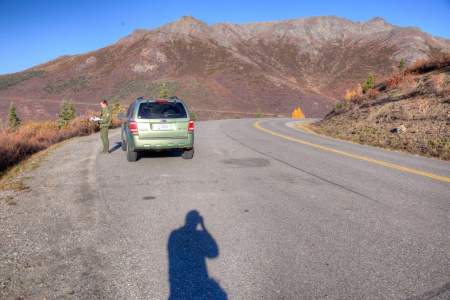 This infor­mal hik­ing area begins at the Prim­rose rest area and heads up a gen­tle ridge until you reach the bench, which pro­vides panoram­ic views of the park. Wild­flow­ers are abun­dant in this area and usu­al­ly peak between July 20 and August 10. 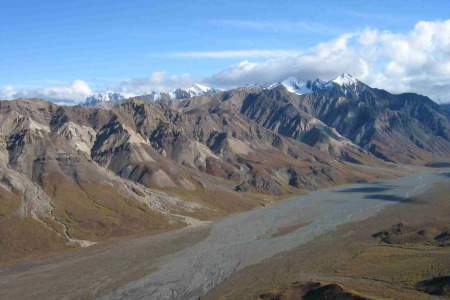 This hike does not require cross­ing any glac­i­ers or dan­ger­ous streams, which makes for a good overnight hike for those who car­ry an overnight camp­ing permit.

Find dinosaur tracks on one of the day hikes from mile 34.05 of the Denali Park Road

A great place to catch a glimpse of Dall Sheep, Igloo Moun­tain is also where the first dinosaur tracks in the park were dis­cov­ered. You can see them your­self, if you go on one of the many easy day hikes that start here. 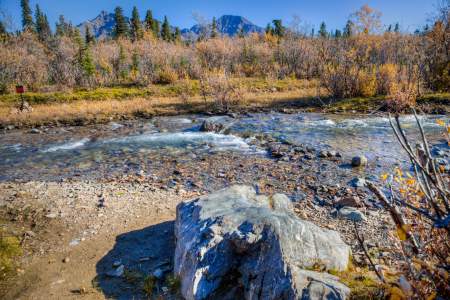 Igloo Creek is one of three tent-only camp­grounds in the park. Sit­u­at­ed right next to the creek, it is a great place to relax and enjoy the wilder­ness and the area around the camp­ground offers great hik­ing opportunities. 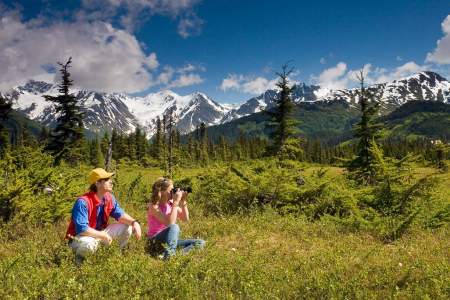 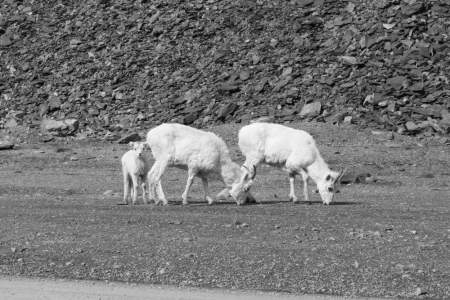 The west­ern coast of out­er Res­ur­rec­tion Bay near Seward offers the state’s best oppor­tu­ni­ty to see wild goats up close, with ani­mals often perched on ledges just above the sea — mak­ing the area a pop­u­lar des­ti­na­tion dur­ing marine wildlife cruis­es out of Seward.

Both moun­tain goats and Dall sheep can be spot­ted on the slopes, one of the few places where both species… 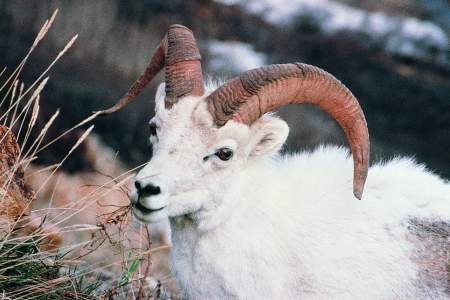 A pop­u­lar stop for wildlife view­ing, this shal­low, pro­duc­tive lake in the Kenai Moun­tains nes­tles between two immense faces that rise 3,000 to 4,000 feet above the val­ley floor. The slope to the north­east some­times draws both moun­tain goats and Dall sheep into the open, one of the few places where both species overlap.

Look for moun­tain goats on this bar­ren, new­ly-deglaciat­ed rock face. The goats feed low down in the ear­ly sum­mer then…

Look for moun­tain goats on this bar­ren, new­ly-deglaciat­ed rock face. The goats feed low down in the ear­ly sum­mer then move high­er as the snow melts and new foliage is exposed. By end of sum­mer, they’re so high they appear like white dots. 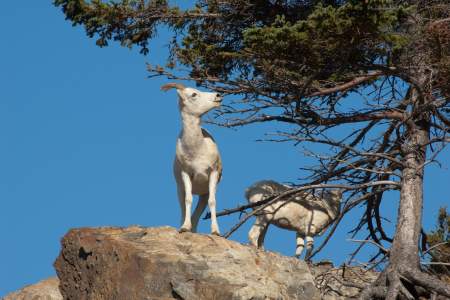 South-fac­ing slopes can con­cen­trate large num­bers of sheep that are espe­cial­ly vis­i­ble after green-up in the spring. Lodges in the area pro­vide spot­ting scopes and good advice, and there are sev­er­al pull­outs and trail­heads with safe parking. 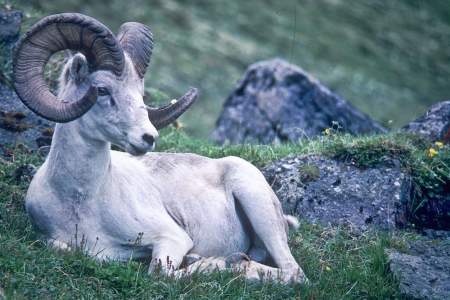 Some of the best sheep view­ing in the world looms over the grav­el James Dal­ton High­way as it tra­vers­es this 4,739-foot pass through the Brooks Range and then descends toward the Arc­tic coastal plain. Sheep can be found along sweep­ing open slopes between the pass and Gal­braith Lake, with best chances of see­ing activ­i­ty between May and September.