Alaska’s oldest National Park isn’t a big one—only 113 acres—but it’s rich with history and there’s plenty to do: hiking trails, ranger-led interpretive walks, carving demonstrations, ethnographic displays, and more. The park’s main attractions are the roughly 20 totem poles and the beautiful coastal rainforest, which you can explore on your own or with park rangers. And kids will love the Junior Ranger program. The Russian Bishop’s House is part of the park as well, but is located closer to downtown (link to this listing).

The park was created in 1910 to commemorate the Battle of 1804 between the Tlingits and Russians. Nothing remains of the Tlingit fort other than a commemorative plaque in an open field, but there’s a ranger-led walk that focuses on the battle. The National Park Service offers two other guided walks, one focusing on the park’s totem poles and the other on the area’s natural history.

Your first stop should be the Visitor Center, where you’ll find maps, a knowledgeable staff, a short film on the park’s history, as well as Native carvers and Southeast Alaska Native regalia.

Designed to represent a traditional clan house, the Visitor Center faces the coast and features an open floor plan cornered by carved house posts with a Tlingit decorative screen. There are numerous ethnographic displays of Tlingit art too—traditional clan property that’s still used today. Check out the bentwood boxes, in which Tlingits poach fish, and the spruce root baskets, used for storage.

There’s also a cultural center. Tlingit artists work here, and you can watch them carve yellow cedar logs into masks or totems, or learn how to soak spruce roots before weaving them.

You’ll also find many of the original park totems, ones too fragile to be displayed outside. But there are plenty of others that are outside, so walk the trails and explore this little gem of the National Park system.

Part of the park is dedicated to the 1804 Battle of Sitka between the Russians and Tlingits. The last major armed resistance by the Tlingits, this was a seminal event in Alaskan history.

The trouble began when the Tlingits settled here, near the mouth of the Indian River, following their victory over the Russians at the Battle of Old Sitka in 1802. They chose this site because the river mouth has a broad fan that extends into the ocean, creating waters too shallow for Russian ships.

A sapling fort housed the Tlingits for two years before the Russians returned in 1804, accompanied by the man-of-war ship the Neva. Even though the fort was built with slanted sides designed to withstand cannon fire, and the Tlingit warriors wore body armor strong enough to stop musket fire, the Russians overwhelmed the Tlingits.

After six days of battle, 500 Tlingits escaped in the middle of the night. They walked all the way to Chichagof Island, in winter, where they lived until they returned to Sitka in 1816.

Nothing remains of the fort or the battle site, other than a grassy field with a commemorative plaque that was dedicated in 2011. But there are ranger-led Battle Walks daily throughout the summer, and there’s a depiction of the story on one of the totem poles in the park. Look for the k’alya’an pole, which was put up in 1999. Near the bottom is a carved depiction of the raven helmet worn by the Tlingit leader Katlian during the battle (his war hammer is on display in the Visitor’s Center). For an updated schedule of guided hikes, visit www.nps.gov/sitk.

When you wander the Totem Trail (also known as Lover’s Lane) and explore the park’s 20 totem poles, you’re joining a procession of admirers that started over 100 years ago at the 1904 World’s Fair in St. Louis, Missouri. Alaska’s first governor, John Green Brady, used them to promote Alaska to the fair’s 19 million visitors.

Brady toured Native Tlingit and Haida villages in the year preceding the fair, securing donations from villages throughout Southeast Alaska. This was a remarkable accomplishment; curators and collectors had been denied totems, even when they offered cash.
In 1906, the totems returned to Alaska after traveling 6,000 miles by ship and rail. They were placed here in Sitka and continue to tell a story of Native cultures in this coastal region. Patched, painted, even re-carved, the totems that now line this trail are a testament to Brady’s vision.

The newest totem in the park is the Centennial Pole, dedicated on May 15, 2011 to celebrate the park’s 100th anniversary. Near the top of the pole you’ll find an interlocked raven and eagle and a National Park Service buffalo draped with centennial Ravenstail robe. Lower down, look for a Julian calendar—a Russian time-telling device that allowed people to mark the passage of time using a circle divided into 12 parts. It represents the importance of the Russian Orthodox Church in the lives of Alaska Native people. Another section replicates the style of another native group, the Haida people, in a tribute to all the park’s Haida poles. On the sides of the pole, you’ll find skunk cabbage and devil’s club, two important plants in Southeast Alaska. There’s even an abstract Mother Earth flanked by male and female salmon.

Also look for the Bicentennial Pole of 1976, carved under the direction of the National Park Service’s first Native American superintendent. It represents the past and future of Northwest Coast Natives, using an abstract depiction of a Native before contact with Europeans, as well as symbols of the eagle and raven clans. You’ll also see a European carved into the pole, bearing firearms, documents, and a cross.

You can learn more on Ranger-led Totem Walks, held daily during the summer. For an updated schedule of guided hikes, visit www.nps.gov/sitk.

The Ovoid—If there’s a shape central to the art of the coastal Pacific Northwest tribes, it’s the ovoid. You’ll see this rounded rectangle used in eyes, faces, heads, and wings in totem poles, screen carvings, and prints. Look for the ovoid, too, in the world around you. Some claim to see it in the wood of old, dead trees or the ripples of ocean water. See if you start to find the ovoid in the landscape of Southeast Alaska.

The Indian River is a beautiful, clear stream that’s home to spawning salmon each summer. Throughout the summer pink, chum, coho, and chinook salmon make their way up the river. You may also see Dolly Varden, char, and steelhead trout. The best fish-watching viewpoint is the arched bridge, which can be accessed by park trails from the Visitor Center.

The park is also developing a “River View” trail, which will travel away from the coast and up the Indian River, and will offer views of the clear water stream, where you might be able to look down on salmon.

Starting at the National Park Service Visitor Center, this trail system takes you through rich coastal forest, along a salmon stream, and past totem poles and memorial sites. There are a number of great views of the shoreline and coastal mountains along the way. Park rangers offer guided walks that explore the area's natural history, military past, and the numerous totem poles in the park.

In addition to exploring the great trails, totem poles, and Indian River, rangers host a variety of family-friendly activities. The guided Totem Walk and Natural History walk are good for kids, even though they aren’t specifically designed for youths. On these interpretive walks, children can learn about edible plants, the lives of banana slugs, or the beliefs and art of Native Tlingit and Haida people. They can also become Junior Rangers. Stop by the Visitor Center and ask for an activity booklet, then interview a park ranger, complete activity pages, and participate in a program to earn an official badge. 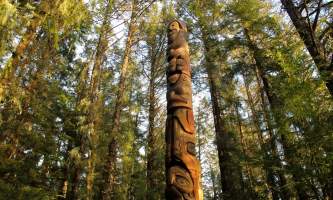 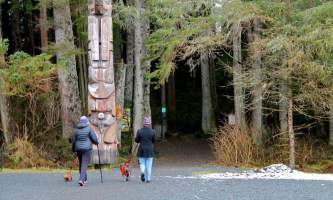 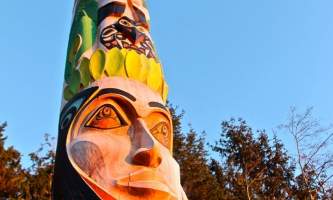 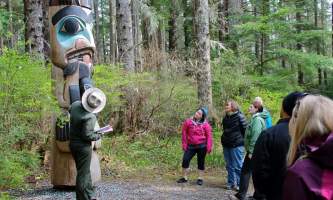 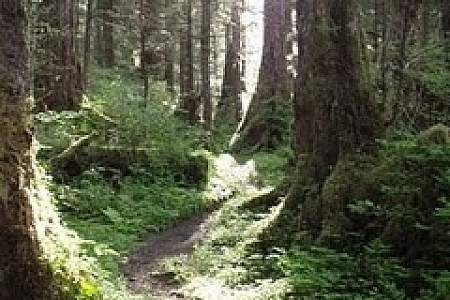 This is a fun lit­tle trea­sure hunt for kids. The mon­ey tree isn’t marked, but it’s near the start of the Totem Trail. Look for a tree stump, about a foot and half tall, that’s filled with coins. Where the branch­es have bro­ken off, there are coins in the lit­tle holes. Peo­ple have been putting coins in this tree for over 50 years; if you can find the tree, join the tradition!

Start­ing at the Nation­al Park Ser­vice Vis­i­tor Cen­ter, this trail sys­tem takes you through rich coastal for­est and along a salmon stream, then opens to views of the shore­line and coastal moun­tains. It also trav­els past totem poles and memo­r­i­al sites, includ­ing that of the 1804 Bat­tle of Sit­ka. The last armed con­flict with the Tlin­gits in Sit­ka and the begin­ning of Russ­ian rule, this bat­tle is memo­ri­al­ized with a plaque installed in 2011. Park…  ...more

The Indi­an riv­er is home to a num­ber of fish: Sum­mer Pink, chum, coho, chi­nook salmon, along with Dol­ly Var­den, char, and steel­head trout. This arched bridge is the place to see them. Be sure to stop by on your way through Alaska’s old­est des­ig­nat­ed Nation­al Park.