Experiencing Alaska by small versus large cruise ship is not unlike the difference between peering out the window of a jetliner cruising by at 35,000 feet and being equipped with your own set of wings. How else could you meander around icebergs and floes to get a front-row seat to a calving tidewater glacier show? Or see an orca spyhop, puffins do their comically klutzy water landings or a mama black bear give her misbehaving cub a whack on the behind?

Whittier-based Discovery Voyages offers opportunities like these through a wide range of itineraries aboard its 65-foot classic working yacht, the M/V Discovery. With a maximum capacity of 12 guests and four crew, these are tours that engage all the senses as you explore the nooks and crannies of Prince William Sound in the company of sea otters, harbor seals and other local characters against a backdrop of sparking waters and stunning, snow-capped peaks.

The company’s owner and operator, Captain Dean Rand, is a naturalist, master shipwright and marine mechanic who’s been involved with a broad range of scientific research throughout the Sound. Dean first came to Alaska more than 45 years ago to work the infamous Bering Sea crab fishery. It would be easier to list the places between Dutch Harbor and Southeast Alaska where he hasn’t worked or played since, but no place captured his heart like Prince William Sound. He has been running tours on the Discovery exclusively in Prince William Sound since 1992.

Make Yourself at Home

Stepping aboard the Discovery is like being welcomed into his home, because it is his home. His daughters, Heather and Hannah, grew up on the Discovery, and were members of the crew for several years when high school and college schedules allowed. Dean's wife, Captain Meg, has been with Discovery since 2010 and is the person on the other end of the phone or emails, and is also the magician in the kitchen! Other crew members are long-time Alaskans and Prince William Sound naturalists, and the type who know their guests’ names before the Discovery pulls out of the harbor. The vessel itself has a storied past, being one of 9 vessels in the "Presbyterian Navy" commissioned for community service in Southeast Alaska. After over 20 years of service in Southeast Alaska, the M/V Anna Jackman was sold by the church to a private party and was renamed the M/V Discovery.

The M/V Discovery is distinguished among other vessels in the small cruise ship category by maintaining status as a U.S. Coast Guard inspected and certified passenger vessel. Her Certificate of Inspection (COI) assures you that our vessel has passed an extensive yearly inspection by the USCG and is in compliance with all the rules and regulations which allow us to carry passengers. Riding aboard an inspected vessel assures you that the vessel has two qualified USCG Licensed Captains on board, a competent crew who is randomly drug tested and has passed safety drills, and indicates the vessel is in compliance with very detailed and specific regulations. Each year, a team of Coast Guard Inspectors board the vessel to perform annual safety exams and drills. They examine maintenance records, waste/garbage management plans, fire control plans, inspect the radar, compass, GPS, life rafts, emergency beacon, radio, navigation systems, and exhaust systems, as well as perform other electrical and mechanical checks. The Discovery also gets a dry dock exam to assess the structural integrity of the vessel. The Certificate of Inspection should not be confused with a Certificate of Documentation which is a national registration of vessels which helps provide evidence of the nationality of a vessel.

When evenings come, guests can kick back with a glass of wine while Meg puts the finishing touches on Prince William Sound Macadamia Nut Crusted Halibut, or local buttery and sweet Spot Shrimp, or perhaps a Beef Wellington to mix it up. We are proud to serve the crown jewels of the salmon world each trip - Copper River salmon, which are highly coveted due to the high levels of healthy omega-3's. But perhaps this day we cross paths with an old fishing buddy and pick up some fresh sockeyes for supper!

Discovery Voyages also offers custom cruises and some outside-the-box trips, like its Sea-to-Ski excursions, a Discovery supported backcountry ski trip. About 40 percent of the Discovery’s guests are families, and a good many of them are repeats. They come from all over the world and all walks of life, but one thing they seem to have in common is a healthy sense of curiosity. 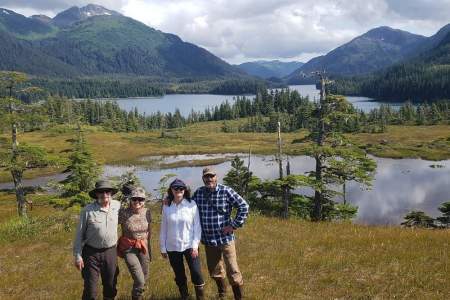 Our Clas­sic Dis­cov­ery Voy­age is the per­fect wilder­ness sam­pler. We take in the most spec­tac­tu­lar sights of Prince William Sound — moun­tains, fjords, glac­i­ers and wildlife — with the num­ber of dai­ly excur­sions (ashore or by kayak) tai­lored to the inter­ests and activ­i­ty lev­el of the group.

Explore the glac­i­ers and wildlife of gor­geous Prince William Sound on this 3‑day cruise with time for hik­ing, kayaking,… 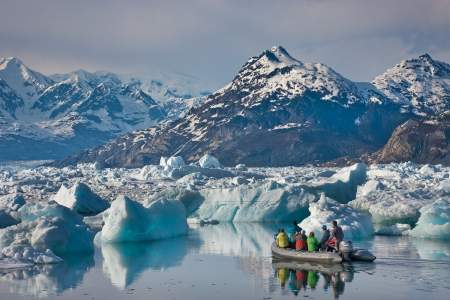 Explore the nat­ur­al won­ders of north­west­ern Prince William Sound Alas­ka in this 3‑day ver­sion of our Clas­sic Dis­cov­ery Voy­age. This is the per­fect cruise for those who don’t have time to do the whole Inside Pas­sage or wish to com­bine their Alas­ka cruise with more shore-based activities.

Explore the land­scape and wildlife of Prince William Sound Alas­ka from the small ship M/V Dis­cov­ery, with plen­ty of… 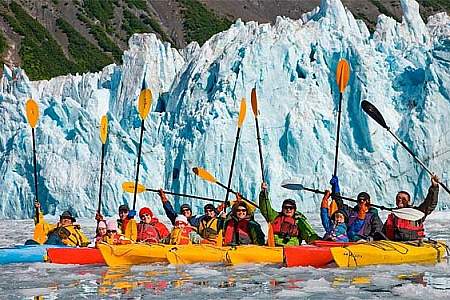 Per­fect for the adven­tur­ous trav­el­er, the Hike and Kayak voy­age sees all the same sites as on our Clas­sic voy­age, but with more excur­sions. Kayak among ice­bergs, hike through moun­tain mead­ows, and take in the scenery on this unique trip. Activ­i­ties can be cus­tomized to suit the inter­ests and activ­i­ty lev­el of those on board. 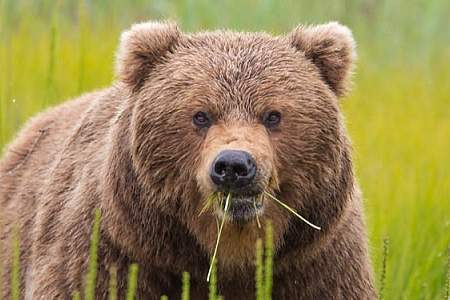