You’ll find that Alaska is different. It feels different. The seasons—and how people respond to them—don’t really progress in the same way they do in the rest of the country.

Depending on the time of year and locale, Alaska is lighter. It’s darker. It’s colder. It’s wetter. It’s snowier. And even if it isn’t hotter (you can’t have everything!) it’s definitely greener.

Alaska can be as lush as a jungle. Or as severe as a desert. It just depends upon the time of year.

Alaska’s year really begins here—when daylight starts to last past bedtime and temperatures don’t freeze at night. The snow melts and the ground thaws, ushering in an era of puddles and mud, of soggy trails and the rubberized footwear Alaskans call “break up boots.” All the flotsam and gunk and litter buried over the previous six months surfaces. A sense of humor prevails.

Early summer: May through Fourth of July

Alaskans embrace the natural world with a lover’s ardor, with towns eerily empty on weekends. Sunny and dry weather often (though not always) dominates, with lingering snow up high. Tourism, sightseeing and recreation rev up, with people out touring, camping, hiking, paddling, cycling, fishing and exploring. From the Kenai River north, it no longer gets dark, with sunset colors painting the northern sky every midnight.

Call it the green season, where the mountains and flats grow jungled with vegetation and the rivers fill with spawning salmon. Tourism and outdoor recreation climaxes, with many Alaskans growing exhausted and sleep-deprived from non-stop activity. The weather grows rainier, and the day’s start to shorten. Nights grow chilly, grass covered in dew. The stars finally return.

The birch trees set the stage, starting their turn just before the equinox. Forest and tundra foliage often goes golden and auburn almost overnight. A hard frost finally strips the trees. By early October, the leaves are down and a wintry nip fills the air.

Barren may be the word. Frozen ground and open woods. Temperatures sometimes drop into single digits at night. It’s the darkest time of year because snow has not yet arrived. Lakes and rivers start to freeze up, restricting some travel before ice thickens. Many Alaskans turn to social and family pursuits. Days grow shorter and shorter. (Some call this time of year “video season.”)

That first big snow dump changes everything. Like a phase shift, the world transforms to white—and can stay that way for four to five months. The days grow short, with a low angle sun feeling weak. As winter solstice approaches, true daylight lasts only six to eight hours in Anchorage, from mid-morning to late afternoon. (See our daylight page.) People hunker down.

You might call it “the sunglass season.” The snowpack hits its climax as the daylight re-conquers evening. Blazing sunshine often rules the weather, with daytime thaws and nighttime freezes creating crust snow that’s magnificent for winter sports and backcountry travel. Hundreds of people will be out on weekends exploring trails up river valleys and into the mountains—skiing, snowshoeing, snow biking, hiking and snowmobiling. For winter sports enthusiasts, this season can be as good as it gets.

Then—puddles begin to appear in town, and snow starts to shrink.

With 15 hours of daylight, mild or even warm temperatures and the best snow cover of the year, people often undertake epic day trips this time of year. These out-and-back journeys can range from 10 to 25 miles. Here are three especially popular trips in the Anchorage area.

When is the best time to visit Alaska?

Here’s an introduction to Alaska’s weather and climate.

When might you bask in the true “Midnight Sun” or experience almost endless civil twilight—the period of nearly daylight after sunset and before sunrise? Check out our Daylight Calculator.

Compare the climate in your hometown to Alaska locations with our interactive Alaska Weather Planner. 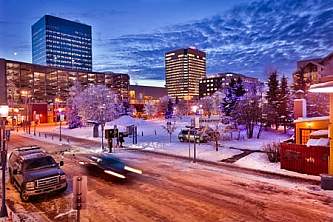 How to Travel to Alaska in January and February

If you’re up for a full-on win­ter expe­ri­ence, Alas­ka in Jan­u­ary and Feb­ru­ary can be otherworldly. 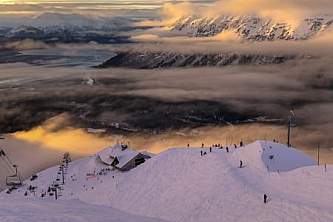 How to Travel to Alaska in December

If you love deep, dark win­ter punc­tu­at­ed by the daz­zle of hol­i­day activ­i­ties, Decem­ber is an exhil­a­rat­ing time to visit…

How to Travel to Alaska in March

Alas­ka in March is a time of longer days, amaz­ing auro­ra view­ing, fun events, and win­ter sports with spring­time conditions.… 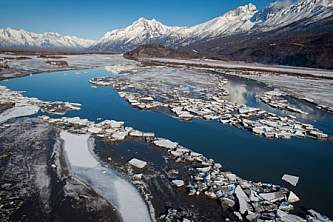 It’s not the most scenic month, but the adven­tur­ous can find win­ter sports, spring break-up, and grow­ing day­light hours