No matter what your budget, if weather permits, you won't regret taking a flightseeing tour of Denali (Mt. McKinley). From the air, nature presents itself on a scale beyond your wildest comprehension.

Most flight tours approach through the Great Gorge of Ruth Glacier, one of the densest collections of granite walls in the world. You enter over a boulder-strewn labyrinth of treacherous crevasses seven miles long, a mysterious jumble of rock and ice resembling a bomb blast's after math. Gravity rams this great jumble of earth and ice into the river country below, obliterating all in its path.

Soon, your plane is dwarfed on both sides by a ten-mile long phalanx of mile-high towers of black-and-brown granite. You stare in disbelief at one of the world's great granite monoliths, the Moose's Tooth, when your pilot tells you its 5,000-foot face was once climbed solo. What appear to be tiny flakes on the wall are actually ledges wide enough to park a tractor trailer.

The ice below is 3,700 feet deep, some of it more than a thousand years old. Were it to melt tomorrow, you would witness a spectacle twice as awesome as the Grand Canyon-a gorge a mile wide and nearly two miles high.

Exquisite ice formations loom on the crest of these walls. You are gazing at blocks of ice the size of shopping malls. The sun's warmth often releases them into a shower of rock and ice that ricochets for a vertical mile before slamming to the glacier floor, sending reverberations a dozen miles. You see their jumbled debris below.

You see fluted ice faces so sheer they resist the stabs of a hardened metal ice ax. For climbers these faces represent some of the most challenging alpine ascents in the world. For you they are mind-boggling scenery- when suddenly your pilot tells you to look up. Just ahead, you see the lofty summit of Denali. Remarkably, North America's highest peak lies less than 15 miles from its deepest gorge.

See the dramatic north side Wickersham Wall; look for wildlife in the Park 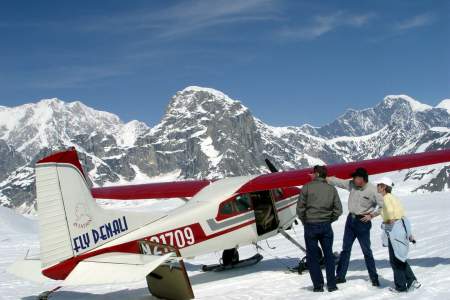 Fly Denali is the only com­pa­ny north of the Alas­ka Range with a per­mit to land on glac­i­ers inside Denali Nation­al Park. The result is a world-class flight-see­ing trip, with land­ings on Denali’s glaciers. 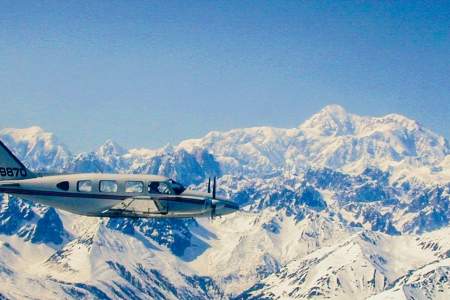 A lot of peo­ple swear to it: the best way to see Alas­ka is from an air­plane, and there may indeed be no bet­ter way to get close to the face of Denali. This one-of-a-kind flight­see­ing oper­a­tor makes it easy to see up close to the Great One with­out spend­ing a great deal of time.

Flight­see over Denali Nation­al Park, choose to land on a glac­i­er, or vis­it the famous Bus 142 made famous… 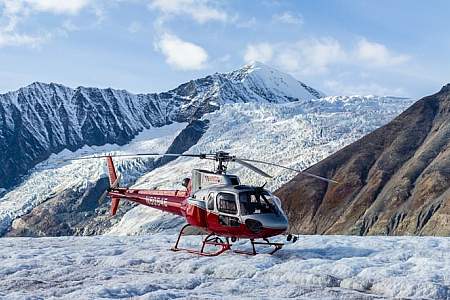 Go flight­see­ing over Denali Nation­al Park in a very unique way: via heli­copter. Lift off on a 50-minute flight —land­ing the heli­copter on a glac­i­er, putting on spe­cial boots, and going for a walk on the frozen land­scape to get an up-close look at it. Or, vis­it Bus 142, made famous by adven­tur­er Christo­pher McCan­d­less. Flight­see­ing in a heli­copter is much dif­fer­ent from in a plane — learn all the ben­e­fits of this great way of check­ing out the  ...more

Reopen­ing in 2023. Spend more time cir­cling Mt. Denali when you go with the only flight­see­ing com­pa­ny with an airstrip… 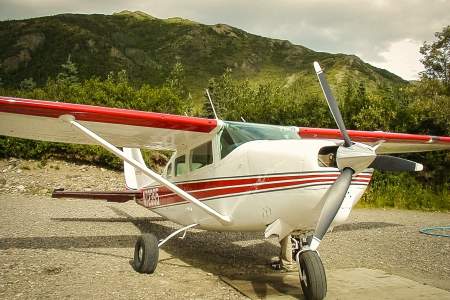 Reopen­ing in 2023. This is the only flight­see­ing com­pa­ny with an airstrip in Kan­tish­na, inside Denali Nation­al Park. Because you depart so much clos­er to the moun­tain than oth­er tours, in a one-hour flight, you’ll get 40 min­utes cir­cling the moun­tain. You may also com­bine a one-way park road bus tour with a Denali flight­see­ing tour for an incred­i­ble overview of the park.

Fly through the heart of Denali Nation­al Park and all the way around Mt. McKin­ley; with Denali Air, everyone… 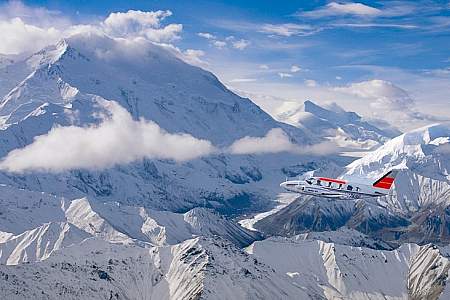 Denali Air flights see the majes­tic moun­tain a whop­ping 90% of the time, thanks to the company’s expe­ri­enced pilots and its loca­tion just out­side the park. And, every­one is guar­an­teed a win­dow seat. Lis­ten to your pilot nar­rate while you enjoy the views.

See the dramatic south side of Ruth Gorge; many options for glacier landings 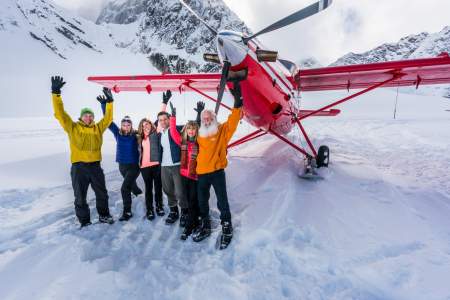 While you may nev­er join the ranks of climbers who have sum­mit­ed Denali, an up-close view of North Amer­i­ca’s tallest peak can still be yours. K2 Avi­a­tion offers once-in-a-life­time flight­see­ing tours among and above the Alas­ka Range. Add a glac­i­er land­ing to get a sense of how immense these peaks real­ly are. 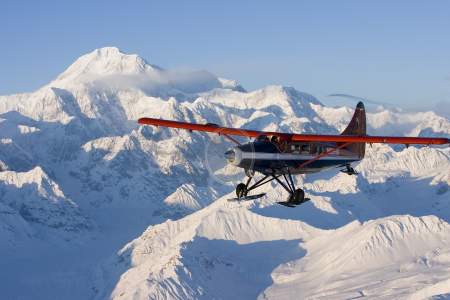 Local­ly known as ​“The Glac­i­er Land­ing Com­pa­ny,” TAT has been fly­ing climbers and sight­seers to the Alas­ka Range and Denali since 1947. Tal­keet­na Air Taxi fea­tures a cus­tom-designed fleet of planes, a ded­i­cat­ed cus­tomer ser­vice team, and a vari­ety of tours for every budget.

More time spent getting there, but a great way to see the mountain in only 3 hours 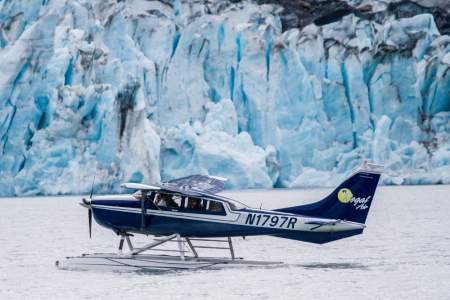 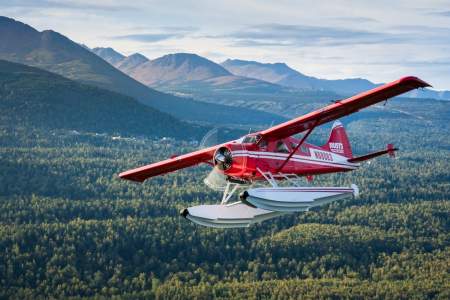 Enjoy a bird’s eye view of Alaska’s scenic high­lights on a flight­see­ing tour with Rust’s Fly­ing Ser­vice, where every pas­sen­ger gets a win­dow seat. Tour options include a short 30-minute Anchor­age Flight­see­ing Safari, a flight to Denali, Denali plus a glac­i­er land­ing, and more. Tours begin at Anchorage’s Lake Hood, the world’s busiest sea­plane airport.

Choose from one-hour flights around the Anchor­age area or longer flights that take in glac­i­ers, Denali or Lake Clark… 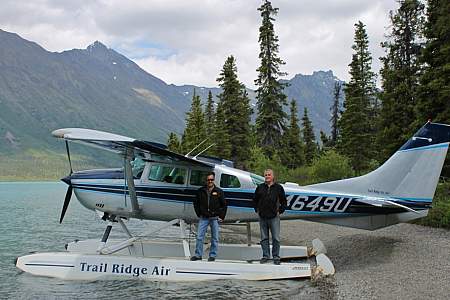 Trail Ridge Air offers an on-demand per­spec­tive of Alaska’s wilder­ness, with per­son­able and knowl­edge­able pilots. Watch for wildlife, check out mas­sive glac­i­ers, alpine lakes, Denali, or even Lake Clark Nation­al Park. Trail Ridge accom­mo­dates for the busiest of sched­ules, with flights rang­ing from one hour to a full day.

If you had to choose… 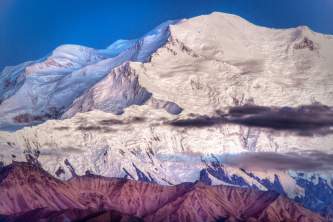