Visitors who come to Unalaska for birding are rarely disappointed. Birds are plentiful, the chances of seeing something unusual are high, and adding several species to your life-list is easy and oh-so-satisfying.

Millions and millions of birds

The sheer numbers of birds in the Bering Sea is staggering. Between 40 and 50 million seabirds feed and make nests here each summer. In winter, the bays around Unalaska are filled with migratory seabirds and waterfowl from the north, who are attracted to the ice-free coastal waters.

Not only are there a lot of birds in Unalaska, there is also variety. More than 150 different species can be found here through the seasons. Songbirds. Seabirds. Shorebirds. Resident birds. Nesting birds. Migratory birds. It truly is a birder’s paradise.

Accessibility and ease of viewing

Unalaska is the most accessible of the Aleutian islands, so while you could have similar birding opportunities on the far-western islands of Attu or Shemya, you wouldn’t have the same travel or accommodation options. And many of Unalaska’s birds are easy to spot just by driving along its 42 miles of roads or walking its beaches.

The Aleutians are home to a number of “Beringian endemics,” or land and sea birds of the Bering Sea that are rarely seen outside this area. These include one of the country’s rarest songbirds – McKay’s Bunting – as well as the Whiskered Auklet, Red-legged Kittiwake, Steller’s Eider and Emperor Goose.

Birds from Asia regularly get caught up in storms and blown off course, winding up in the Aleutians. The Eurasian Siskin found its way to Unalaska just that way in 2014, attracting visitors from all over the country to see this “Code 5” bird for themselves. Code 6 birds are extinct, which gives you an idea how cool it was for the small town of Unalaska to host a Code 5 bird.

Much more to see

If you haven’t been successful in converting your family members to a birding way of life, you can sell them on an Unalaska trip for many of its other virtues. Visitors are often surprised at how pretty it is herewith rolling green hills, broad sandy beaches, and stunning snow-capped peaks. On a birding excursion, you might also see wildlife (sea lions, otters, whales) and World War II historical remnants. The Museum of the Aleutians, World War II Visitor’s Center, and the Russian Orthodox Church are all popular and fascinating tourist destinations. And a trip to the docks is usually appealing to both birders and fans of the hit show Deadliest Catch – one spots for birds, and the other for well-known crabbing vessels. 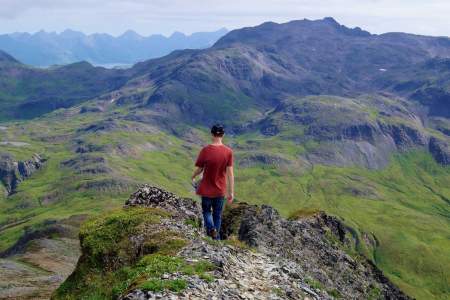 The 2,300-foot Pyra­mid Peak is sur­round­ed by Pyra­mid Val­ley, Cap­tains Bay and miles of pop­u­lar hik­ing trails, includ­ing a cir­cuit around the peak. This loca­tion is for the bird­er who wants to get out of the city and indus­tri­al areas of town to lis­ten for bird­song while sit­ting among the wild­flow­ers or berries of the Aleut­ian tundra.

The group of five vol­canic islands are small, but are impor­tant nest­ing grounds

Some of the most valu­able seabird habi­tat in the east­ern Aleu­tians is locat­ed about 16 miles from Unalas­ka, east between Aku­tan and Unal­ga islands. The group of five vol­canic islands are small, but are impor­tant nest­ing grounds for some species that are rarely seen elsewhere.

The ​“S‑curves” of Air­port Beach Road are well-known by locals as a great place to watch for water birds and for whales. Pull off between the Dutch Har­bor Post Office and Gilman Way, and start adding to your life-list!

Locals love the dri­ve along Sum­mer Bay Road, a 7‑mile stretch north of town on the west­ern shore of Unalas­ka Island. This area, with coves and rolling green hills, is not only pic­turesque, but serves as an eas­i­ly acces­si­ble place to watch for a good mix of birds — from seabirds and water­fowl to nest­ing eagles and breed­ing song­birds. (Except for win­ter, when the road might be closed due to snow or avalanche risk).

A wide vari­ety of birds and marine wildlife can be seen in Unalas­ka Bay. Tour by char­ter boat, or join a guid­ed sea kayak­ing tour, where your guide can help you spot sea otters, Steller sea lions, and humpbacks.

The tow­er­ing stacks are a source of shel­ter, espe­cial­ly for birds that don’t nor­mal­ly live in Unalaska 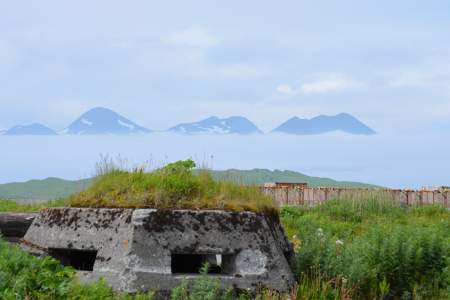 Tens of thou­sands of pots are stacked and stored in yards in between crab­bing sea­sons. The tow­er­ing stacks are a source of shel­ter, espe­cial­ly for birds that don’t nor­mal­ly live in Unalas­ka. Crab pot yards are on pri­vate prop­er­ty, but you may be able to view from the road or get per­mis­sion to walk around.

Great spot for a chance to view bald eagles

The bald eagle pop­u­la­tion on Unalas­ka has fluc­tu­at­ed over the years, and has some­times been as high as 700. Here, these birds of prey are as plen­ti­ful as pigeons are in oth­er cities, giv­ing vis­i­tors a rare oppor­tu­ni­ty to observe our nation­al sym­bol up close.

Also known as Sec­ond Priest Rock, Lit­tle Priest Rock is a large, point­ed rock eas­i­ly spot­ted near the entrance to Sum­mer Bay. Birds perch on the top and on short­er rocks near­by (many just above the sur­face of the water). Lit­tle Priest Rock attracts many seabirds and shore­birds, includ­ing bald eagles, puffins, Emper­or Geese, grebes and loons. 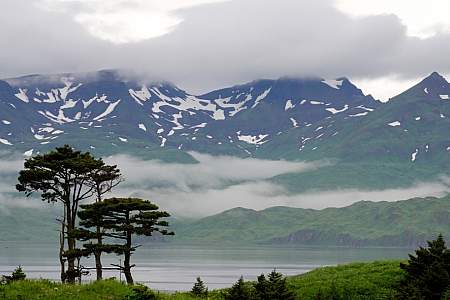 Some birds that wind up in Unalas­ka are ​“acci­den­tals” that have been blown off course by storms. If they are used to liv­ing in forests, there’s only one place to head: Sit­ka Spruce Park, known to local bird­ers as a ​“migrant trap” for unusu­al birds.

Jut­ting half a mile into the cen­ter of Unalas­ka Bay, the Dutch Har­bor Spit offers a short, sea-lev­el hike… 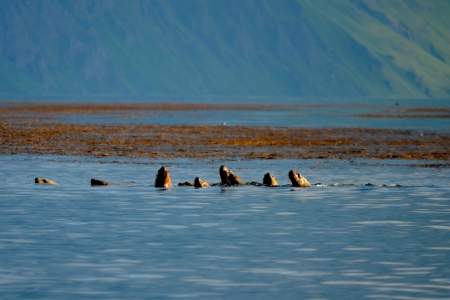 Jut­ting half a mile into the cen­ter of Unalas­ka Bay, the Dutch Har­bor Spit offers a short, sea-lev­el hike for all ages, with beach access, wildlife view­ing and bird­ing. The trail fol­lows an old roadbed, which makes for an ide­al hik­ing sur­face. You’ll want to stop fre­quent­ly with a ready cam­era for close-up views of marine mam­mals on either side of the spit. 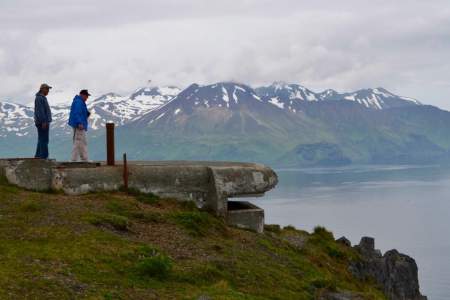 A dri­ve or walk up Mt. Bal­ly­hoo is inter­est­ing for both bird­ers and those inter­est­ed in World War II his­to­ry. It’s such as good view that you might even catch sight of whales in the dis­tance. The view from the 1,634-foot moun­tain gives you an idea of how birds might see the area (that is, if you can imag­ine the view with a lot more col­or and super-sharp clarity)

Unalaska’s Front Beach, on the shores of Ili­uliuk Bay, is both invit­ing and picturesque 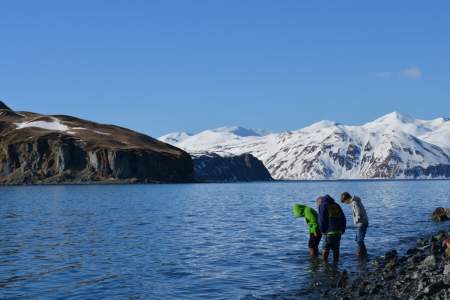 Unalaska’s Front Beach, on the shores of Ili­uliuk Bay, is both invit­ing and pic­turesque. Look­ing toward the bay, watch for boats com­ing into har­bor, eagles fight­ing over salmon, or mist engulf­ing the sur­round­ing hills and moun­tain tops. Back toward Unalas­ka, you’ll find more emer­ald green moun­tain views and his­toric sites.

If your trav­el group includes a WWII enthu­si­ast, a wildlife devo­tee, a bird­er, and a kid who enjoys rolling… 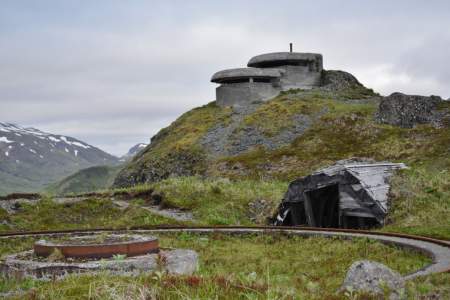 If your trav­el group includes a WWII enthu­si­ast, a wildlife devo­tee, a bird­er, and a kid who enjoys rolling around on the tun­dra, Bunker Hill is the per­fect spot. Plus, it has the best pho­to ops, with a 360-degree view of the entire area: Cap­tains Bay, Amak­nak Island, Unalas­ka Bay and Ili­uliuk Harbor.

Fish are plen­ti­ful in this upwelling — a real buf­fet for the birds!

Chelan Banks is an area where the Bering Sea and Unalas­ka Bay meet. Fish are plen­ti­ful in this upwelling — a real buf­fet for the birds! You could see thou­sands of shear­wa­ters, alba­tross, the rare short-tailed alba­tross and the very rare mot­tled petrel. 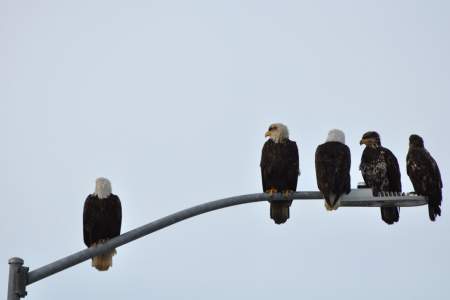 The mild stroll around Straw­ber­ry Hill offers great views, wildlife and some his­toric fla­vor. Old mil­i­tary roads cov­er the area, pro­vid­ing easy walk­ing. Adven­tur­ers can bush­whack or scram­ble short dis­tances for bet­ter views of the sur­round­ing area or get up close to WWII-era trench­es and the remains of old bunkers.