A drive or walk up Mt. Ballyhoo is interesting for both birders and those interested in World War II history. It’s such as good view that you might even catch sight of whales in the distance. The view from the 1,634-foot mountain gives you an idea of how birds might see the area (that is, if you can imagine the view with a lot more color and super-sharp clarity). The panoramic overlook out to the Bering Sea, Amaknak Island and Unalaska Island illustrates the strategic importance this site held during World War II, when Fort Schwatka and Coastal Battery 402 were built here.

Birders can usually find rock ptarmigan here, as well as many bald eagles. Since there are few trees on the island, the bald eagles of Unalaska build nests in the ground or on cliff faces. The cliffs of Mt. Ballyhoo offer a secluded spot for the nests, which are used year after year and can become quite large.

Hike around Ballyhoo and today and it’s easy to imagine the lives of the 250 servicemen who were stationed here during World War II – peering into the skyline watching for enemy activity, and seeing so many eagles – the national symbol – seemingly on lookout right along with them.

Before you explore, get a self-guided tour map at the World War II Visitor Center, and a land use permit from the Ounalashka Corporation (the property owner). Then, tread carefully and with caution. Steer away from the cliffsides, which may be undercut, as well as old underground tunnels, which have collapsed.

Ballyhoo is well known as a great local hike, and can be walked in an hour. It’s steep, but the views all along the route are magnificent. (Find the trailhead just past the airport along a dirt road). You can also rent a car and take Ballyhoo Road to Ulakta Drive. This is a switchback, gravel road first built in the early 1940s and then upgraded when Fort Schwatka and its surroundings became a National Park Historic Site in the mid-1990s 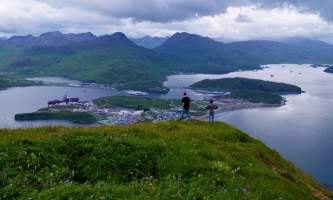 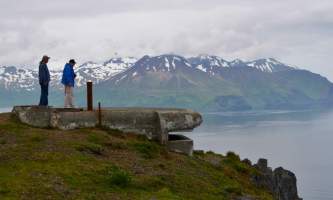