If your travel group includes a WWII enthusiast, a wildlife devotee, a birder, and a kid who enjoys rolling around on the tundra, Bunker Hill is the perfect spot. Plus, it has the best photo ops, with a 360-degree view of the entire area: Captains Bay, Amaknak Island, Unalaska Bay and Iliuliuk Harbor.

This vantage point was a strategic location for coastal defense during World War II (along with nearby Mount Ballyhoo). After the Japanese bombed Dutch Harbor in 1942, four 144 mm guns were placed on Bunker Hill (then called Hill 400) – with the capability of firing in a 360-degree radius. You can check out the two-tiered Base End Station and Panama gun mounts that still remain.

The clear view at the summit also makes Bunker Hill a popular whale-watching spot in July and August. Look out over the Captains Bay side for acrobatic humpback whales who often feed in this protected bay on their way back to breeding grounds in Hawaii.

Wildlife and birds can be spotted on your way up and down Bunker Hill. Bald eagles, black oystercatchers, marbled murrelets, guillemots and cormorants are among the birds you can see, and you may also find fox, sea lions, harbor seals and harbor porpoise.

The shape of this part of Amaknak Island resembles a small South America when you look at it on a map, which is why you may hear locals reference this spot as “Little South America.”

You can hike to the summit of Bunker Hill from two directions: either an old military road on the side facing Captains Bay or a trail on the side facing Iliuliuk Harbor. The trail is steeper than the military road, but both offer great views. Be sure to purchase a land use permit from the Ounalashka Corporation before exploring. 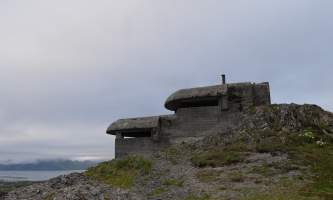 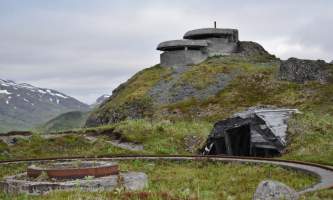 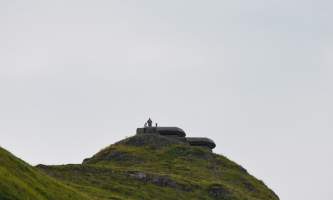