When you go on a bear-viewing tour out in the wilds of Alaska it’s not unreasonable to want one thing: to see more bears than other people.

This small operator, based out of Homer, prides itself on being just that—small—so that you can get both a private charter experience and an intimate look at Alaska's most majestic and often entertaining creatures.

With a maximum of just four people per tour, these full-day trips take you to see the bears in remote parts of Katmai and Lake Clark National Parks. Your pilot and guide is Charlie, a retired law enforcement officer who has more than 30 years of flying experience. While most bear-viewing tours use wheeled planes, Alaska Bear Tours uses a floatplane, leaving from Homer’s Beluga Lake, which gives owner and pilot Charlie more versatility about where you go. Keeping the groups small, too, means better quality viewing of the bears; with too many people, the bears easily get spooked, and head for the woods—which defeats the whole purpose of coming to see them. Indeed, while the specific locations vary for Charlie's tours, based on the season, he says he tends to avoid super-popular Brooks Falls, due to the crowds.

Sweeping Views from Above, Close Views on the Ground

After all, during the summer, bears are on the move, so each part of the season offers opportunities for you to get out of the plane, once you land, to explore different terrain (you just need to bring a daypack with your lunch, camera and binoculars—if you want to use hip waders, Charlie can provide those.). In June, you’ll see the bears eating grasses (and even sparring for the attention of romantic partners) on the tidal sedge flats. In July, the bears start feeding on salmon in the coastal streams and rivers, and mamas are tending to their cubs; by August, the bears’ pursuit of salmon takes them (and you) to the remote lakes in the tundra.

Whatever the destination is for the day, the trip there is breathtaking: the route from Beluga Lake passes by the sheer beauty of Alaska’s volcanoes and glaciers. Between the flight itself and the fascinating look at the bears on the ground—you'll get about 4 to 5 hours on the ground, with a money-back guarantee of seeing bears—this day trip makes for a priceless memory of your time in Alaska. 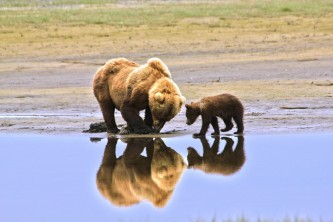 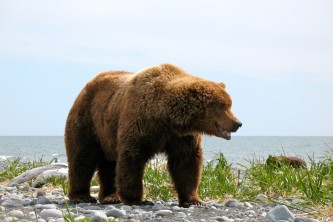 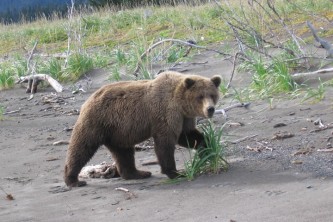