There are more than 50,000 black bears and 35,000 brown bears living in Alaska’s untamed wilderness: they're lumbering through berry-covered hillsides, raising their young and slapping at salmon-choked rivers. But unlike moose, you probably won't casually encounter bears along most roads. You really have to go searching.

That’s one reason why bear-viewing tours are some of the pricier excursions you can take in Alaska. Most tour operators gain access to bears’ prime locations by way of a small plane, though some tours will take you on a boat. But it’s completely worth the price—these are just about the best wildlife viewing experiences you can have.

Indeed, many companies actually guarantee sightings. They do so because they know when and where to find the peak locations for the major salmon runs each summer. Those snow-fed rivers are shallow, swift, and clear, and they offer a spectacle in themselves— because, along with the arrival of the bright red schools of fish also come the bears.

When you take a tour, you’ll see bears congregating near the water—playing, sunbathing, and teaching their young fishing technique—and you can get fairly close without disrupting the event (and, of course, stay safe). You’ll likely also see the bears start feeding with a frenzy. It's not unusual to see 15 or 20 of them throughout the course of the day—and literally tens of thousands of spawning red salmon. For an extended experience, choose a bear viewing lodge or boat tour.

They’re easy, reasonable and offer a huge array of wildlife. These day cruises—where tour companies take you into pristine waters and along undeveloped coastlines—are a great activity for the whole family, since the price point is not too high ($150 - $200 for a half to full day excursion) and child prices are pretty economical.

Captains on these cruises are always on the lookout for wildlife, and will stop the boat to drift along when they’ve spotted something good—such as a whale, porpoises, or even eagles, who like to be near the prime fishing locations. You'll probably see hundreds of harbor seals basking on the icebergs around you, and any number of puffins, cormorants, sea otters or dall’s porpoises. You may also see dozens of otters, floating in the open waters, or hundreds of shore birds swirling above their rookeries, with their carefully crafted nests tucked among the rocks.

Denali’s Park Road offers a solid chance to see Alaska’s big 5: wolves, moose, grizzly bears, Dall sheep, and caribou. The 95-mile stretch of road is only accessible by park buses, which means traffic is relatively low, and that lends itself to more wildlife activity.

After Mile 3, you begin to enter the wilderness—in this area, taiga forest. Even though wildlife viewings are never guaranteed on these bus tours, this is prime moose habitat, and you can see them anywhere on this stretch of road. Just watch for a flash of sun glinting off antlers, or moose nibbling fresh willow leaves along the road. It’s also not uncommon to see wolves from Teklanika on. As you ride over high mountain passes you’ll usually see Dall sheep on the mountainsides—and if you're lucky, you'll spot bears too.

Granted, you may not get as up close and personal to the wildlife as you would from a bear-viewing tour, but this is a great deal considering you’re only paying the price of a bus ticket, compared to the price of an air charter. That said, there are times when the animals will get curious and come right up to the bus. If they don’t, some tours are now equipped with cameras that zoom in on the animals and project their image at the front of the bus for everybody to see.

About 40,000 bald eagles live in Alaska—that’s more than half of North America’s total population. This means you have a great chance of seeing bald eagles when you’re here.

Typically, eagles congregate along rivers where they have easy access to their favorite meal: fish. Since they tend to return to the same spots and nests each year, guides are pretty adept at pointing out active nests as you head down a river on a floats or rafting trips. Depending on the time of summer, you can spot bald eagles sitting on their eggs or feeding their chicks. You might even see fledglings perched on the edge, flapping their wings before their first flight.

It’s also easy to go bald-eagle-viewing on your own—just ask a local where the eagle-gathering spot is in town.

In some ways, moose are pervasive in Alaska, even in a big city like Anchorage. These massive, hulking creatures jog through soccer and baseball fields, wander neighborhoods in the morning—making paperboys cut short their routes—and nonchalantly cross highways, forcing motorists to wait.

Come winter, the moose population in Anchorage explodes, as the animals head to lower levels to find food. In other words, they often live off the locals’ landscaping, eating mountain ash and birch trees. Many an Alaskan wakes up in the morning to find the trees in his front yard destroyed (and, perhaps, the culprit curled up and snoozing against the warm house).
Despite all this, you might not see a moose during your stay. While there are no organized tours for seeing moose, here are reliable places to find them:

Watching a salmon run is easy, exciting and robustly colorful: The best rivers for viewing these salmon are shallow and clear, so the water appears thick with the fishes’ bright red bodies. After all, these are the fish that have completed their life cycles without getting caught—and these guys are big.

If you want to watch a piece of this incredible journey, there are plenty of places around Alaska to do it—you just have to know when the salmon are running, and where the best locations are. The state has created overlook platforms where you can view the salmon, sometimes accompanied by an interpretive display explaining the salmon’s life cycle.

Of course there’s wildlife all over Alaska, but you can never have a guarantee of seeing them—except at one of several wildlife parks, where you can view Alaskan animals up close. Here are our favorites:

The Alaska Wildlife Conservation Center is located just an hour south of Anchorage. Spread across 90 acres, the animals live in large enclosures—so large, in fact, that your photographs appear to be of animals in the wild. You’ll be close enough to see the individual feathers of a bald eagle, watch bears play, or hear the bison as they rip grass out of the earth for lunch.

The Alaska Raptor Center in Sitka, where you can resident birds such as eagles, owls, and falcons.

The renowned Alaska Sealife Center in Seward is home to stellar sea lions, harbor seals, and lots of shorebirds. You can witness a 2,000-plus-pound Stellar sea lion gliding past underwater viewing windows, as well as puffins diving in a carefully crafted naturalistic habitat, or harbor seals resting on rocky beaches.

The Alaska Zoo, located in South Anchorage, isn’t like normal zoos. Enclosures are spread throughout a wooded area, leaving plenty of space between them, so that animals are not crowded.

Other great options include the Reindeer Farm and the Musk Ox Farm, where guests can view these two species while learning about the farm operations.

You can often spot these large, white sheep from various roadways throughout Alaska—that is, if you’re looking carefully. The way these sheep keep safe is to stay up high in the mountains and along cliff sides to avoid predators. That means, to the naked eye, they can just appear to be white dots.

Just south of Anchorage, however— along the Seward Highway and Turnagain Arm—there is a world-famous viewing location for Dall Sheep, known as Windy Point. These rocky cliffs are a popular hangout for the sheep, and sometimes they’ll even come directly down to the roadway to lick the salt. In the spring, you can watch the young ones learning how to navigate those rocky cliff sides, or view the magnificent rams whose horns can reach a full curl or more.

Another possible viewing spot is from the Denali Park Road, if you’re taking a bus tour. During any drives through Alaska, be sure to bring binoculars just in case they’re too high to see clearly.

This isn’t your conventional wildlife viewing experience. Indeed, very few visitors actually visit walrus haulouts because they’re not easily accessed. But, it gets a spot on our list because the experience is truly amazing. Walruses “haul out” during the summer months when sea ice is not available for them to rest on. At these very secluded locations—hundreds of miles from any major town—you can see hundreds of walruses lining the beach, as well as listen to the cacophony of their noise and—yes—smell their distinct odor.

The three most popular spots to see them are Round Island, Cape Seniavin, and Cape Peirce. U.S.. Fish and Wildlife Service employee, Joe Meehan (907-267-2281), is the best contact for arranging a trip. You'll have to fly out of Anchorage and then take a commuter flight or helicopter ride or boat ride to these destinations.

People who coming to Alaska for the first time know we have a lot of bears—and get disappointed when they find out that polar bear viewing locations are few and far between. It is not impossible to see them, though.

Polar Bears live in the Arctic, wandering along the coast or on the ice at certain times of year. If you want to see them, the best time is during whaling season in coastal Arctic villages, where there can be up to 50 or more polar bears feeding on the leftovers of a hunt.

There are a few organized tours in the Arctic villages, such as Polar Bear Expedition with Northern Alaska Tour Company. They offer a full day tour from Anchorage to Barter Island in Alaska's Arctic region.

Want to see thousands of caribou grazing on the open tundra? To do it, you’d usually need to charter a plane to the Arctic National Wildlife Refuge, or go deep into the Talkeetna Mountains, north of Anchorage. Even then, the location of the caribou isn’t always known, since they’re migratory animals that don’t stay in one spot for long.

You have one other option, though: You could float down one of the rivers in the Arctic Refuge in June. The conditions will probably not be ideal—for one thing, it will be very buggy—but chances of seeing caribou herds are pretty good. 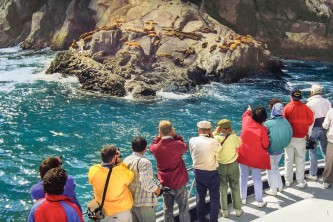 One has bet­ter whale watch­ing, the oth­er bet­ter glac­i­er viewing 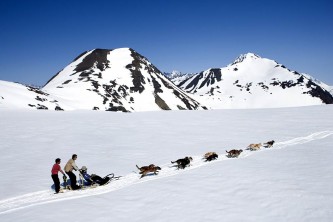 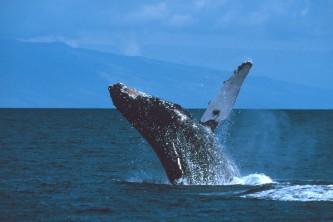 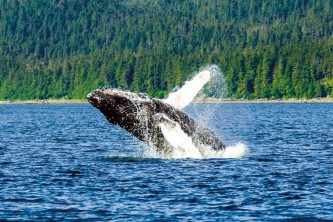