You See A Bear

Where You'll See Them

Bears travel along to the same paths that people do—trails and the banks of rivers, good for quick fishing stops. Bears might be found walking through brush, through—a big reminder to make noise if you're in thick brush.

Your food, your hunting kill, your fish, even your trash. Otherwise, they just want to be left alone. Bears tend to be shy unless they feel threatened. Mama bears get furious if they think you're too close to their cubs.

Other than their color, you can spot some differences between brown bears and black bears. Brown bears tend to be larger, and have a hump near their shoulders. Black bears, meanwhile, are known for their long, "Roman" noses. Here are some pics of brown bear tracks, black bear tracks and bear scat (as in, poop).

If You See a Bear

If a Bear Charges You

Some bears will bluff you by doing a mini-charge and stopping short (the right response: back away calmly). A bear that is standing is usually just curious.

If the bear charges all the way, it's probably because she feels threatened. Your best bet is to play dead (face down, or curled up with hands on head).

One possible qualifier: Black bears. Recent history in Alaska has proven that if a black bear keeps after you even while you're playing dead, your only choice is to start fighting with everything you've got.

Here's a video clip of a guy staying calm while a bear continually bluff charges him.

You Surprise A Mama Bear With Cubs

There was a time when the prevailing advice was to stand your ground. While this advice still applies to juvenile bears or dominant males, opinion has changed in recent years on how to react to a surprised sow who charges. There have been several tragic incidents in which sows have charged with blinding speed and swiped the heads of hikers or fishermen. Unfortunately, the soft tissues of the human head are no match for a bear's strength and sharp claws.

The sow's goal is to neutralize any threat to their cubs as quickly as possible, then leave the scene. We recommend playing dead and protecting your head. If necessary to protect their young, a sow will not even back down from skirmishing with larger male bears who can inflict injury.

Can You Shoot a Bear?

It's legal only if you're defending someone's life, or your property. Your hunting kill doesn't count as property, and self-defense is moot if you left food out that the bear wanted.

Should I Carry Bear Spray?

Yes, many people do. The Alaska Department of Fish & Game recommends bear spray and it is effective in many situations. Wind direction is critical, and can extend its effective range or shorten it. Most bear spray has a range up to 30 feet. Remember, that most airlines will not allow you to fly with bear spray, but it can be purchased at many locations once you arrive in Alaska, like Mountain View Sports, Cabela's, Sportsman's Warehouse, and even grocery stores like Fred Meyer. If you purchase bear spray, read the instructions thoroughly so you are prepared to use it if necessary. Most sprays come with a holster that you can fasten to a belt or backpack where it is within easy reach. 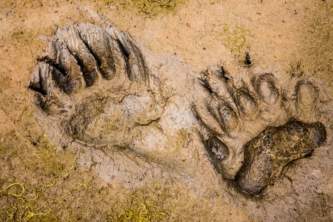 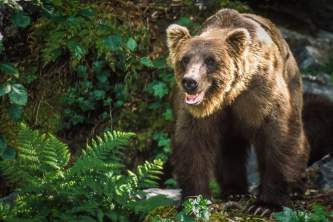 Run an odor-free camp; know what to do if a bear comes in 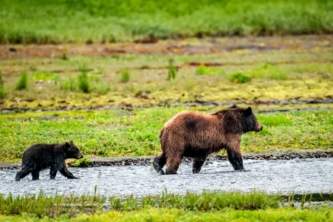 What are the most bears peo­ple have seen at one time? (and more fun trivia) 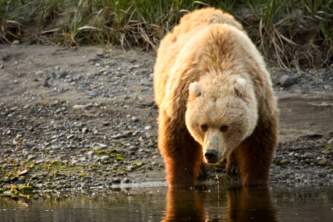 How To Identify Alaska's Bears

How to iden­ti­fy a brown, black, or polar bear – even if you can’t dis­cern its color