One of the many benefits of floating down an Alaskan river is the opportunity to see wildlife. And the density of brown and grizzly bears is especially high along rivers. It makes for a greater chance of spotting and photographing them, of course, but it also requires a certain amount of knowledge and precaution to keep yourself safe.

Seeing bears is great—but not in your camp. How many stories have you heard about nosy black bears who have stolen food from someone’s site? It usually happens because things weren’t put away well. Much of keeping bears away is "odor management,” so here are a few tips on keeping a clean camp, as well as avoiding bears on hikes.

Like the new alumaweld boxes that are often sold with rafting gear. Or, set up a portable electric fence (powered by a small battery kit) around the kitchen at night.

Keep your food on the rafts, which should be floating in the river

If you are canoeing or in an area that has a bear problem, you’ll want to hang your food.

Don’t leave anything smelly in the tents

This is not just food, but soaps, shampoos, lotions, etc. No one really knows what a bear will be attracted to, so you just have to eliminate as many odors as possible. Keep those things away in a separate bag or waterproof box. Cold storage really keeps odors down as well—one reason to consider storing toiletries on the floor of your raft at night. The odor stays small this way.

Set up your kitchen by the river

Heavy food smells areas are typical where you cook, so cook near the water and away from the tents. That way, it’s also easy to clean up food spills (and high-water will clean many beaches).

Be meticulous in cleaning up after meals

Burn all food scraps on a screen over the fire—smoke should be a deterrent to bears, so be wary of a bear that shows up in camp from downwind of the fire. Wash the dishes right beside the river and dump all dishwater into the river. Scoop up any dropped food and toss it in the river, too, and then put your food bags in the boat. If you can, even wipe down your table with bleach.

On hikes, make noise and go in groups

If you want some solo time, let another person in the group know your plans. And don’t be gone for too long. There aren’t any recorded bear attacks on groups larger than three.

Bear spray, bear bangers, flares, air horns, guns—there are lots of bear deterrents, but what should you bring? That depends. Rivers are often managed by public lands departments, which may have restrictions on what you can carry. Here are our suggestions.

Bears usually run when they hear loud noises, so keep an air horn on the kitchen table. It’s also a good idea to have an air horn near the toilet/groover or when going cat-hole.

This has been proven to be more effective than guns in stopping an aggressive bear. Place one in the kitchen and have one on your belt at all times. Don’t stuff it away in your backpack! Bears are quiet, and they appear suddenly, so you won’t have time to fish it out of your pack. You have to spray it at a fairly close range, and take wind direction into consideration.

Use these to scare off inquisitive bears, even ones that are far away. Just remember that with these, you’re relying on noise to deter the bear, so always keep bear spray or a gun handy. 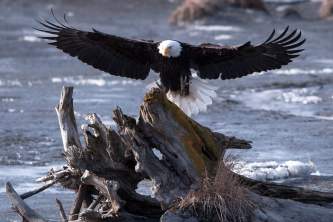