Denali Away From The Crowds

Denali National Park is a don't-miss stop for many Alaska vacationers, and for good reason. It’s home to Denali—North America’s tallest peak at 20,320 feet—as well as what we call Alaska’s Big 5: caribou, moose, wolves, bears, and Dall sheep.

Given those draws, it’s no wonder Denali can get a little crowded.

The good news is that it’s not hard to escape those crowds. Most visitors in Denali are just passing through—on a larger group tour, or on an extension of their Alaska cruise. These passengers tend to check into their hotels, join a bus tour into the park, perhaps pick up an adventure tour like flightseeing or rafting—and then depart for their next stop.

If you’re visiting Denali independently, or just want to break away from your cruise group, here’s how to do it.

Take the Park Shuttle Instead of a Guided Bus Tour

During the summer, the first 15 miles of the 92-mile Denali Park Road are open to private vehicles, but beyond that, you’re not allowed to drive the park road. So, your two main options to go farther than those first 15 miles are the park shuttle bus or a tour. Tour buses are heavily promoted, and are a good way to see the park: You're guaranteed narration, and some buses have cameras that let you view wildlife in the distance. They're not a good fit, however, if you want to explore the park on your own. The park-operated shuttle buses, on the other hand, offer a lot of freedom: You can hop off, explore an area for a couple hours, and then jump on a different shuttle when it drives by.

Choose lodging outside of the "Canyon"

Most hotels near Denali are clustered just outside of the Park Entrance in an area referred to as the "Canyon" or "Glitter Gulch". These hotels are great if you've arrived by train or motorcoach and want easy access to the park entrance as well as hotel pick-ups for tours. But there are other options. North of the Denali, there are a few cabin rental and B&B options in Healy. Just south of the Park Entrance, there are also a few smaller hotels, cabin rentals, and even a hostel. You can reach the areas south of the park using the Sheep Shuttle if you don't have transportation of your own. The third option is to stay inside the park at a remote wilderness lodge. These lodges are small, and are located at the very end of the 92-mile Denali Park Road. There are no shops and restaurants (but all food is provided with your stay). It's a much quieter side to Denali.

If you’re comfortable with camping, you will get away from it all…for real. There are 6 campgrounds in Denali National Park, and 3 allow RVs; the others allow tents only. Riley Creek is the most populated, since it’s nearest the park entrance. But, compared to other national parks, it’s pretty tame. Here is the complete list of campgrounds in Denali.

Renting a bike is another alternative to a bus tour. You can expect a bit of traffic on the first 15 miles, where private vehicles are allowed, but after that it gets significantly quieter, since road traffic is just made up of buses. If you don’t want to start at the beginning of the road, you can always put your bike on the park shuttle bus, hop off at the stop of your choice, then pedal back towards the entrance. Or, hop another shuttle when you’ve had enough.

Go Heli-Hiking or on a Guided Hike Inside the Park

Want to get remote without being totally alone? Take a heli-hiking tour with TEMSCO Helicopters. You–along with a small group of fellow travelers—will be dropped off in the tour operator’s special hiking area, just outside the national park’s boundaries. Your guide will point out different flora and fauna, animal tracks, and more.

To discover hiking areas accessible from the Denali Park Road, you can join Traverse Alaska. Their specialty is crafting fully-guided, private, custom single or multi-day adventures. Each day hike is catered to your activity level and interest -- whether that's capturing great photos or challenging yourself on a remote hike. And, they'll give you backcountry knowledge if you want to then try a solo hike on another day in the park.

There are hikes in and near Denali National Park for just about every skill level. Gentle walking trails lead away from the Visitor’s Center, as well as more challenging climbs with rewarding views. Even the trails that are easily accessible are far less crowded compared to other National Parks. The Triple Lakes trail, for instance, is one of the least crowded near the entrance (it’s also 9.5 miles, but you don’t have to hike the entire trail). Other popular trails include Horseshoe Lake (3 miles roundtrip) and Healy Summit (5 miles roundtrip). If you want to hike inside the park, just hop the park shuttle to its trailhead. Here is the complete list of trails in and near the park.

Stay Awhile on a Learning Vacation

Denali Education Center offers in-depth learning vacations on their residential campus, just 6 miles south of the park entrance. A for-purpose partner of Denali National Park, they offer a variety of programs guiding visitors throughout Alaska with as many as 6 nights in Denali. Get to know the people and the place in a way that few visitors do with guided hikes on Denali's front country trails, trips into the park, and classes on flora and fauna. In addition, meet the locals during evening presentations and learn about a lifestyle that is as rewarding as it is harsh in Interior Alaska.

It’s not actually inside Denali National Park, but The Denali Highway sits close by, and you’ll still experience the tundra views with mountain peaks towering in the distance. If you have a rental that allows travel on gravel roads, it’s a great experience away from the crowds. If you don’t want to rent a vehicle, Denali Highway Jeep Excursions offers a Denali Highway drive as a tour.

Just like the Denali Highway, Denali State Park is completely separate from Denali National Park. The sights and scenery, however, are pretty similar. The state park is the locals’ favorite for hiking and camping, and it’s far less crowded than the national park. That said, there are no lodges in Denali State Park, so your best bet, if you don’t want to camp, is to stay in Talkeetna and drive up for the day. Otherwise, the McKinley Princess Hotel makes a good base camp for exploring the State Park, too. If you don’t want to explore alone, you can sign up for a guided hike with Alaska Nature Guides. 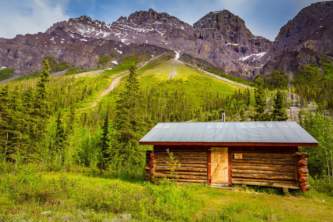 Top Ways to Get Away from Crowds in Alaska

Some­times you want Alas­ka to your­self. Here’s how 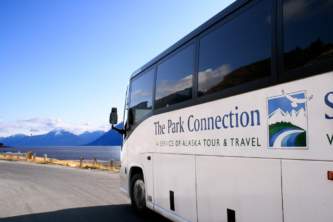 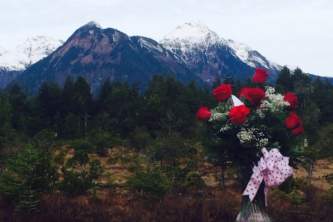 Planning a Destination Wedding in Alaska

Want to have a des­ti­na­tion wed­ding in Alas­ka? Fol­low our tips to pick the per­fect date and venue. 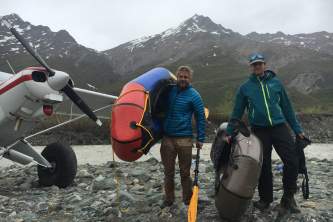 Fol­low our tips and tricks to fill your Nation­al Park Ser­vice Pass­port with Alas­ka park stamps.