When an Overnight Hike Includes a Bear Encounter

“A black bear is maybe 200 yards away and heading in our direction.”

That’s how I woke up my 15-year-old son, Ben, at 4:30 a.m. as we were camping out in the Alaskan wilderness one summer. I stepped outside the tent and shouted, “Hey Bear! Whoa Bear!” at the top of my lungs. With our food and cooking gear safely stored several hundred yards away inside a bear-proof container, I was confident this bruin was likely just on his standard journey of foraging. But I chambered a round into my 12-gauge and confirmed my bear spray was at the ready, just in case.

The sun had just risen, as had I, when I had seen the bear ambling over the tundra around the Kesugi Ridge Trail, about 2.5 hours north of our home in Anchorage, where I’ve lived for 40-plus years and work as a professional photographer. The day before, Ben and I had backpacked about 8 miles on the trail and passed one of the best, unobstructed viewing locations of the Alaska Range, including the peak of Denali itself.

This was obviously a more stressful situation. As I continued to yell, the bear continued his journey—not directly at us, but growing closer nonetheless. He was a beautiful animal, big and healthy. I told my son I might be firing a warning shot. Black bears aren’t known for being overly aggressive, but it’s always best to let them know, with certainty, that a human is present.

The bear kept moving, but as I reviewed the geography, it seemed he would continue on the path of least resistance—up the small valley with no vegetation to impede his progress. Though he did come closer, I could now see that his trajectory was not going to threaten our space. With intermittent shouting, I simply watched as he ambled onward, not paying us any worthy attention.

By now, Ben was out of the tent and we enjoyed watching the bear wander and, eventually, disappear from our view. We then found our way to our food cache, boiled some water, and made instant oats—our go-to morning backpacking breakfast.

Leaving the tent set up as our base, we filled our day packs with lunch and went off to explore more of the ridge.

The Kesugi Ridge trail is nearly 29 miles long, running south to north within Denali State Park, in the foothills of the Talkeetna Mountains. It has four access points; we had chosen the Ermine Hill trailhead because it was nearly in the middle—one of the more easily accessed and less steep trailheads. Within three or so miles, we had left the forested area behind as we steadily increased elevation to the ridge and, ultimately, to the spot where we camped.

Now that we were on the ridge, the hiking was much easier. The trail became much more level as it wound its way through a diverse alpine area, twisting around small ponds, along tundra meadows, and on rock and ground granite. Fortunately, others had built small rock cairns to mark the route in the rocky areas.

Since this was a remote area, it wasn’t surprising to see a young bull moose, with small velvet antlers, grazing far down below us in an alder patch. It also wasn’t a surprise to see a ptarmigan, Alaska’s state bird, scurrying along our path. And along most all of the day’s route, the panoramic scene of Denali and its lesser siblings constantly took our breath away.

Arriving back at our base in the late afternoon, it was time for a nap. Too hot to be in the tent, we lay in the shade of it, on top of our sleeping bags. After exploring the area a bit more, we headed back to our vehicle. We had plenty of time, since the midnight sunset was still a good five hours away. 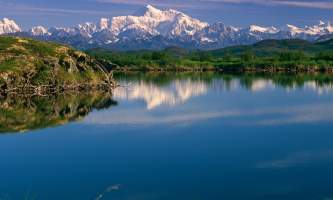 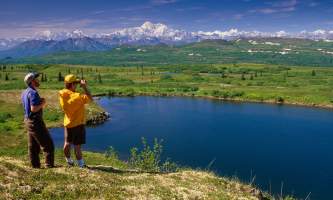