Shutters clicked and heads swiveled a sour group of seven flew at eye level of the breathtaking, snow-covered, sheer granite walls above, below, and to all sides of us: the 10,335-foot-high Moose’s Tooth, and other “teeth” named Broken, Sugar, and Bear.

The dazzling spectacle came 20 minutes into a 90-minute flightseeing tour of the Alaska Range from Talkeetna. As a photographer living in Anchorage, flightseeing these mountains is an experience I’ve had before—and while it never grows old, I wanted to share it with my adult niece, who was visiting. Staring out the huge windows, she was as mesmerized as all of us.

Below us was Ruth Gorge—the world’s deepest gorge, said our pilot. It’s also a mile wide and packed with more than 4,000 feet of ice, much of it rippled with undulating crevasses that make entrancing graphic patterns. Ahead of us, Ruth Glacier meandered through the rock gorge, its 40 miles stretching out seemingly forever.

Also ahead of us: Denali. At 20,310 feet, it was another 12,000 feet above our current altitude and some 20 miles away, yet it seemed very close. The plane made a wide circle to our right into a large, bowl-like area known as the Don Sheldon Amphitheater. Sheldon is a famous bush pilot who, in the 1950s, pioneered many of the landing areas in the Alaska Range to support both mountains climbers and scientists. Sheldon even built a 16-foot, octagonal mountain hut on a 5-acre parcel in the amphitheater before the land became part of the national park. It seemed but a dark red speck down below us as the pilot continued to make a 360-degree turn.

Denali came more into view, and cameras appeared glued to foreheads, capturing the surrounding beauty: Patterns of white against blue against grey. Despite there being just three colors, their combination in such varied shapes, configurations, and designs dazzled us. The sheer size, combined with the cold, stark, apparent in habitability, had a very real pureness to it.

The pilot began a descent into this massive sugar bowl as he continued to describe the history and geology of the area, including notable mountain climbs and climbers. As he once again pointed out Sheldon’s mountain house, it and everything below us seemed as if in miniature. He then warned us of a thump we would feel as the hydraulic wheel-skis locked into place and that our landing would be at the 6,000-foot level, on an uphill, snow-packed “runway.”

The landing was exceptionally smooth and (and was in deed uphill), our bodies pressed against these at backs. The pilot taxied quite far uphill and then cranked the 1,000-horsepower turbine engine to turn the plane 180 degrees and pointed in the direction we came.

The group was anxious to get out and experience this Grand Canyon-like marvel. It was late afternoon, making the snow a bit soft and mushy, but we easily managed a short walk from the plane, with the white, blue, and gray all around us.

The group was anxious to get out and experience this Grand Canyon-like marvel. It was late afternoon, making the snow a bit soft and mushy, but we easily managed a short walk from the plane, with the white, blue, and gray all around us. Cameras and phones once again appeared for panoramic images and fun video clips while tossing snowballs.

After loading into the plane, the pilot set a course to take off in the opposite direction—downhill! “Gravity gets us up to our takeoff airspeed quicker and the runway just falls away,” said the pilot, as if this were something everyone does every day. Indeed the take off was flawless and our trip back was no less spectacular than the ride in.

As we landed on the dry pavement—and on wheels—in Talkeetna, our pilot ended the tour with: “Remember that big granite block, The Moose’s Tooth? If you get to Anchorage, visit the best pizza place EVER. It has the same name—Moose’s Tooth. They have more sales than any other independent pizza restaurant in the U.S.!” We were sold on both the flight and the advice. 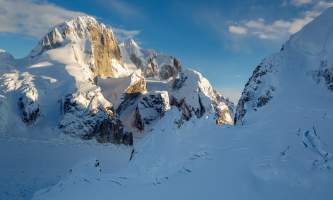 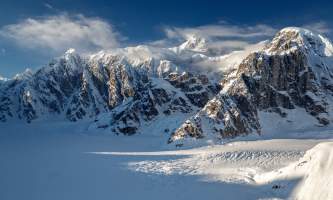