“Let’s slow down coming around this corner,” I said to my son Ben. “There’s always a possibility of Dall sheep here at Windy Corner.”

I eased the pickup from 55 mph to 35 as we traveled south on the Seward Highway, following the water’s edge of Turnagain Arm. And sure enough, I could see a group of five ewes and two lambs on the rocky terrain, just 10 miles from Anchorage, their pure-white fur giving them away against the grey rock and green vegetation.

Windy Corner, aptly named for the high winds along Turnagain Arm, is the only location in the world where Dall sheep can be seen at sea level from a roadway. In fact, they congregate here year-round, attracted by a natural mineral deposit in the area, as well as an abundance of grasses, lichen, and shrubs. It’s information I’ve picked up as a longtime resident of Anchorage.

Wanting a closer look, we pulled over in a parking area at mile 106 and donned daypacks, hoping to swiftly hike up the trail and take some photos before they grazed their way out of sight. As we began, we could still see them clinging to a craggy, nearly vertical rock face not more than a quarter mile away and just 150 feet higher than the road.

Stalking the Sheep...and the Surprise

The aspen trees and thick willow bushes on the uphill trail concealed us from the sheep for awhile. But then the foliage opened up, allowing sheep and human an unobstructed view of each other. From experience, I knew if we kept moving slowly and quietly, we wouldn’t spook the sheep. So we moved into stealth mode, even while taking photos, inching further up the path and getting closer to them with each step.

The sheep seemed ambivalent. As our steps brought us closer, we became stationary again to make more images and observe their behavior. Simply watching these creatures tight-roping the cliff edges and sticking their death-defying vertical leaps to a new grazing location is a delightful treat. By now, they were working their way downward. After 10 minutes, all but two had descended to a lower area, where another forest of aspen and willows hid them from view.

Simply watching these creatures tight-roping the cliff edges and sticking their death-defying vertical leaps to a new grazing location is a delightful treat.

Ben wanted to go further toward them. I suggested he go ahead without me, as I was going to wait and watch the two remaining ones a little while longer. Ben began a slow climb and was soon out of sight onto a narrow stretch of trail, ensconced by the new forest. A few minutes after Ben’s departure, the lingering two likewise went out of sight. I hustled a bit to catch up to my son.

Suddenly, Ben was retreating quickly in my direction. When he saw me, he began waiving wildly for me to go backwards. I began to back up and Ben stopped just outside the entrance to the forest where the trail was wider. “They’re coming! They’re coming! Get ready!” he whispered, loudly enough for me to hear.

To my amazement, down the trail came one ewe, followed closely by another, walking gingerly within 10 feet of Ben and 30 feet of me. Trailing those two was a lamb, which stopped for a couple seconds and glanced around as it came out into the open. It then scurried and leaped downhill to catch up. The remaining three ewes and the last lamb followed suit.

The sheep continued downhill to a grassy knoll, offering the unique opportunity to see them from above instead of the usual perspective of down below. Ever so slowly, Ben and I ambled to a vantage point where we could see the sheep, Turnagain Arm, and the Kenai mountains in the background. We sat and admired the mothers and their offspring for 20 minutes of delight until they strolled in another direction and disappeared.

We high-fived and marveled at having such an incredible experience possible within 30 minutes of our home and after only 500 yards of hiking. 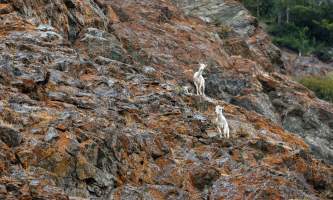