Few things symbolize the wild Arctic better than the polar bear. As an outdoor and nature photographer living in Anchorage, polar bears had long been on my wish list of subjects to photograph. And in September of 2016, I finally got the chance.

My travels had taken me to the Inupiat community of Kaktovik, located on Barter Island, on the top of the Arctic National Wildlife Refuge in northeast Alaska. Some 645 air miles from Anchorage, Kaktovik is the northeastern-most community in the state, closer to the Canadian border than to any other Alaskan town.

After settling into my room at the Waldo Arms, I headed to the dining room for a briefing from a U.S. Fish and Wildlife Service employee about polar bears—their habits and habitat, and the rules about interacting with them. Then I was ready to head out in a boat with my guide, Steve Kaslowski, and the skipper—local resident Jack Kayotuk. Even though I was experienced with cold conditions, I was happy they offered me a complete set of insulated overalls. Windy, chilly, and slightly moist conditions always seem colder and more inclement when out on the water in an open boat.

A combination of factors led to this location becoming popular to see polar bears. The bears use sea ice as hunting platforms for seals, and the sea ice pack here on the Beaufort Sea has steadily decreased since 1979. Also, it’s taken longer each year for the fall sea ice pack to develop, so the polar bears have increasingly relied on other sources for food. One of those sources has been “bone piles”—the bones that remain from bowhead whales hunted by Kaktovik residents. Now that the bears can be seen consistently, locals take tourists to see them, which has created a new revenue source for them.

I have photographed brown bears fishing for salmon at the famous Brooks Falls in Katmai National Park, but photographing polar bears is a new level of wildlife experience.

I have photographed brown bears fishing for salmon at the famous Brooks Falls in Katmai National Park, but photographing polar bears is a new level of wildlife experience. They’re the largest of the bear species, and reputed to be dominant predators, but their mannerisms are very different from brown bears. Brown bears will fight over a single salmon, for example, but I watched a dozen polar bears in close quarters feeding on whale bones with no aggression between them.

The real treat, however, was watching adult male polar bears spar on the land of the Bernard Spit or in the waters of Kaktovik Lagoon. Each sparring match started with the bears sniffing and checking each other out, and then silently agreeing to a match. The length of the sparring play would vary from five to 30 minutes.

Considering how fascinating these bears are, it’s no surprise that more and more people have been coming to see them. The U.S. Fish and Wildlife Service, which controls the flow of boats in the Kaktovik Lagoon, started requiring special boating licenses for tour operators and placing a minimum distance restriction of 30 yards when approaching polar bears.

At 19.28 million acres, the Arctic National Wildlife Refuge is the largest, most contiguous Arctic habitat in the United States. There are only two villages within the Refuge (Kaktovik and Arctic Village), and no roads or buildings outside of those communities. However, there is lots of wilderness, including the Brooks Range and the Coastal Plain—a strip of land between the Beaufort Sea and the mountains.

That Coastal Plain attracts some 200 species of birds from all over the world, which come to nest and raise their young. There are snowy owls, Arctic terns (which make a 20,000-mileround-trip journey), and threatened or endangered birds like the spectacled eider. It’s also an area popular with mammals. The Porcupine caribou herd uses it as calving grounds. And of course there are the polar bears—the highest concentration of polar bears from the Beaufort Sea population. And they’re also threatened.

When not out on a boat, I spent time walking around during the day (walking is less safe at night, as polar bears roam freely around the village). I was mostly looking for birds to photograph. On one particularly windy day, I encountered a modest group of snow geese on the edge of the village. In the distance, I could see the towering mountains of the Brooks Range on the south side of the Coastal Plain. I also saw a group of four sand hill cranes and a variety of ducks. This was late in the season, when most birds had departed to the south. I only imagined what it would be like up here when all of the visiting birds were present. 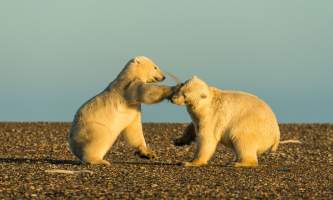 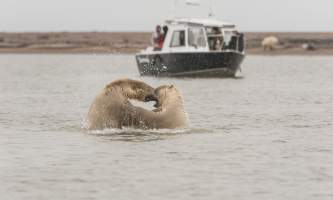 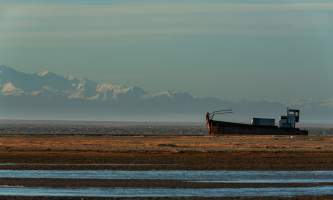 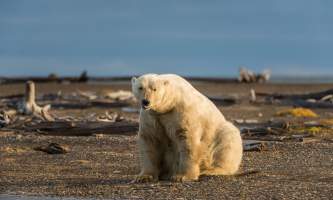 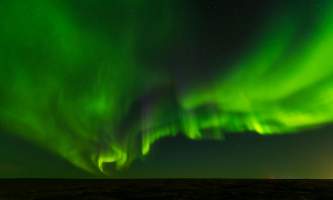 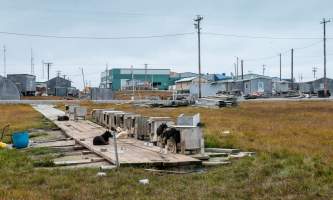 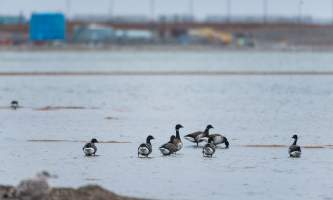