Looking for Moose Among the Chugach Mountains

Arriving an hour before sunrise, the day was still quite dark. Ahead of us was a deep drop to a wide valley. Another fold of the Chugach Mountains lay on the opposite side, the ridgeline barely noticeable in the blackness. A sheer layer of fog lay above the creek below us. There was no one in sight.

My two photographer friends and I were on a mission this early August morning—a moose photo mission—along the Powerline Trail of the Anchorage Hillside Trail System at Glen Alps, just outside Anchorage. We were here early because moose are more likely to be actively moving and feeding before the day warms up. By 11 a.m., many of these enormous animals usually bed down for a few hours; we were hoping to take photos of them before that happened.

The 10-mile creek drainage we were hiking plays host to a substantial congregation of moose during fall mating season, though many moose are here year-round. We just wanted to spot a few to photograph.

The Scan and Scout

The strategy was to use our high vantage point to scout for a bull or two that we could get closer to, with as short o fa hike as possible. In the near-dark, our binoculars swept the tundra and spruce forest for any sign of movement. For some 15 minutes, we saw none.

But as the light improved and the mist began to lift, big dark dots began to appear. “There’s two next to the creek upstream of that big rock about ¾ of a mile up,” said my friend Randy. “Can’t make out any racks on them. Probably cows, not bulls.”

“I see a big bull down past the bridge, near that fireweed patch,” I exclaimed. “That’s our man!” said Ron.

Our subject was maybe ½-mile away, downhill from us and near one of the several trails that crisscrossed the valley. Within 15 minutes, we had crossed the bridge where we had last seen him.

The mammoth creature had not moved far in that time, spending his time munching on willow branches. The closer we got, the more impressive his antler rack became. Now a mere 200 yards away, we made sure he knew we were there. No surprises. No sudden moves. We had an escape route if need be. And pepper spray. We moved slowly but deliberately, now off the trail, to an area ahead of him, trying to get a lighter-colored, more photo-appropriate background for him to walk into.

I was hopeful we’d still have some fog, as it usually lends a mysterious look to photos, but it had already lifted. That disappointment was tempered by seeing more moose. “There, off to the left, there’s two more,” Ron whispered. Sure enough, two smaller bulls were advancing toward our quarry. We could only hope for them to get into a sparring encounter. If nothing else, having two or three moose in one frame would be a delight.

We could only hope for them to get into a sparring encounter. If nothing else, having two or three moose in one frame would be a delight.

For nearly two hours we shadowed the movements of one or all three, taking photos of any interesting behavior. Realizing that we posed no threat to them, they would nose up to each other, at times doing play-type sparring.

Eventually, the temperature rose higher. First one moose bedded down, then another. We headed back to our truck, excited to have spent a great morning with these fine creatures. 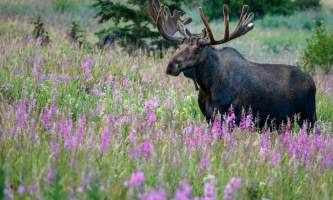