Learning About Birds in Alaska’s Aleutians

During a short flight in a Cessna 285, I watched as we passed between mountains, over streams, and along the edges of lagoons and barrier islands. Then, out of nowhere, a 10,000-foot air strip appeared—an unexpected sight in the remote wilderness.

The runway was in the town of Cold Bay, out on the Aleutian Islands—just a 90-minute flight by jet from Anchorage, but a world away. While tiny—with a population of just 100 or so—Cold Bay has the third-longest airstrip in Alaska, making it a major hub in this part of southwest Alaska. I had flown through it before, this time I stayed: As an outdoor and nature photographer, I couldn’t resist the opportunity to explore the area and see what it had to offer.

Thanks to its vital location in WWII, Cold Bay was originally constructed as a staging area for military supplies; a place with quick access to the war’s Northern Pacific theater. The long airstrip was originally constructed to support military aircraft, but now serves other purposes. At least once a year, airlines and cargo planes crossing the Pacific make emergency landings at the long airstrip, which was reputed—though never confirmed—to have been a landing site for the space shuttle.

The location is also central to migratory birds making their way up and down the Pacific Flyway. Over a billion birds fly along this corridor, between wetlands in South America and the Alaskan Arctic—as many as 20,000 miles round-trip. For many of them, the wetlands, ponds, lakes, and lagoons in this part of the Alaska Peninsula are essential stops along the way. 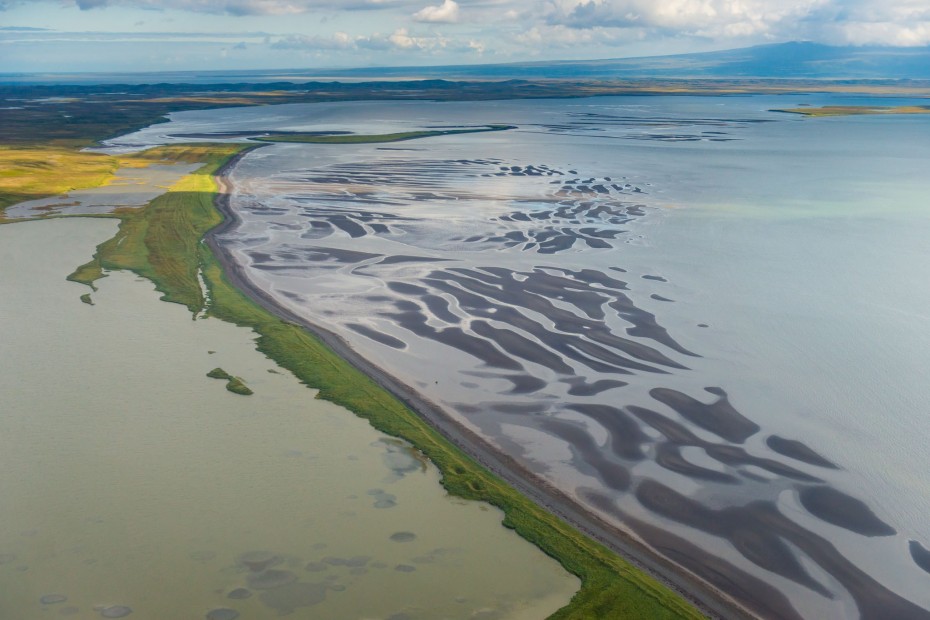 Over a billion birds fly along this corridor, between wetlands in South America and the Alaskan Arctic—as many as 20,000 miles round-trip.

This prime habitat prompted the establishment of the Izembek National Wildlife Refuge (NWR) in 1980, to preserve vital fish and wildlife habitat and implement specific treaty obligations designed to protect the migratory birds. At the heart of the Refuge is the 150-square-mile Izembek Lagoon, an important migratory bird habitat, particularly for the Black Brant. The entire Pacific population of 150,000 Black Brant stops over in the lagoon during fall migration.

Stepping - Off Point for Wilderness Adventures

Cold Bay is much like many remote, small communities in Alaska. Supplies have to be flown in, few things are discarded, and the local economy is supported by visitors and the government. The U.S. Fish & Wildlife Service offices for the Izembek NWR are easily identifiable from the three cylindrical wind turbines used to generate power for the office. It’s the Izembek NWR that brings in outside visitors for world-class fishing opportunities, wildlife viewing, and to hunt the migratory birds.

The raw openness of the land particularly struck me as I drove the long road from Cold Bay to Grant Point, on the edge of the Izembek Lagoon. Along the way, countless streams and ponds provide access to fish and birds, many of which carry the name of bird species like Canvasback, Surf Scoter, and Pintail. To get a sense of the community, I spent time at the general store talking to locals and enjoying black cod, caught right at the main dock (which has a handy fish-cleaning station).

The weather is a dominant force here, on the edge of the Bering Sea; only the Izembek Lagoon separates the notoriously turbulent sea from the community. It’s consistently one of the cloudiest locations in the United States, with an average of 304 overcast days every year. I experienced some sunny and some partly cloudy conditions, but wind was a constant factor. It seems to be a signature feature of life out on the Alaska Peninsula.

Like many of my visits to remote locations in Alaska, I was inspired to come back again and see more. I imagined vast fields of fireweed in bloom in late summer, spending more time exploring streams with a fishing pole, and boating out to photograph the immense variety of birds that pass through this area in autumn. 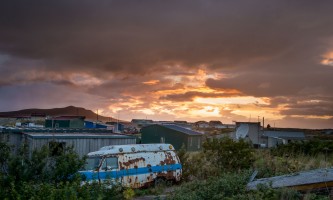 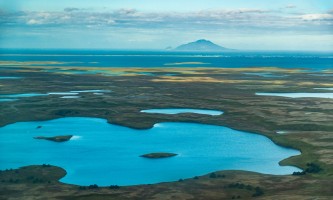 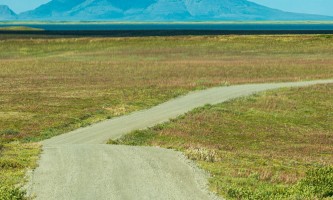 There are some 60 bore tides around the plan­et, but Tur­na­gain Arm is one of the world’s biggest.

Wel­come to Redoubt Bay, a bear-watch­ing haven at the entrance to Lake Clark Nation­al Park.