The ice would crackle as we kayaked by, and every so often we’d hear a crash—the end result of an iceberg fracturing off into the water. But the sounds that really startled us were like gunshots, when enormous hunks of calving ice would break off of the glacier more than half a mile away; by the time we would look in the direction of the blast, though, any evidence was already under sea.

This paddling was part of an overnight, late-July tent-camping adventure I took with my friend Ron on the lake in front of the 400-foot-high, 25-mile-long Knik Glacier, 50 miles east of Anchorage. As a professional photographer and a resident of Alaska’s capital city for 40-plus years, this was a familiar destination—but each experience has been unique.

Paddling Among the Bergs

The scenery is amazing as many hundreds of icebergs fill the lake, and kayaking allows to you paddle right past them. Some are the size of houses; others have rolled over just enough to reveal their piercing blue color.

Though the lake appeared to be dead calm when we were there, the ice was still moving slowly; the outlet of water was seemingly singing a Siren’s call, drawing them to move in its direction. This occasionally caused icebergs of every size to stack up, making it that much more difficult to navigate our kayaks through the jam.

Around the lake, the pink of dwarf fireweed flowers peppered the granite moraine, creating a quilt of color and patterns. We traversed the battleship-gray water as we crossed the outlet, the headwaters of Knik River, and beached our kayaks on the solid-rock bumper of the shore.

We set off on a hike and this, too, was spectacular: Striations ran in patterns nearly everywhere, piquing our curiosity of when and how the glacier moved through this area and milled the grooves we were seeing. To our amazement, we found a few leaf fossils among the isolated small ponds. Plants squirmed their way out of what seemed to be solid rock. The extraordinary geology of this area is spellbinding.

After barely scratching the surface of all there was to see, we headed back for a simple hot dinner cooked over our backpacking camp stove. An arctic ground squirrel was curious enough about our menu that he walked up within touching distance.

An exploratory evening saunter on foot was our after-dinner plan. More dwarf fireweed and Mountain Dryas splayed all around. Then we saw an odd sight for such a sparsely wooded area: a young bull moose in velvet, ambling along near the shore. Even though the area had a decent amount of alder for food, we thought he was lost. Perhaps the new growth of these alders convinced the moose to migrate.

But he wasn’t alone: we found three more on our short hike, adding to the magical experience at Knik Glacier. 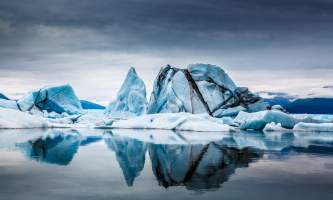