How a Real Alaskan Sees the Northern Lights

It was 12:30 a.m. one mid-August night when my wife, Joan, and I arrived at the parking lot of the Glen Alps Trailhead. It’s Anchorage’s most popular hiking area, but those of us who live here year-round also know that in the darker months, it’s a great spot to see the aurora borealis—the northern lights. As longtime residents—we’ve lived here for 40-plus years—witnessing the phenomenon isn’t new to us, but it’s always marvelously thrilling.

That night, the sun had set at 10:30 p.m. and the sky was cobalt blue. The conditions to see the lights were supposed to be good: the forecast from the Fairbanks Geophysical Institute rated the level of solar activity a 5 out of 9 (6 is rarely seen and 7–9 almost never happens).

As we arrived, the skywas already fluctuating in a light green pulse. The high aurora prediction combined with a nearly full moon and a temperature of 52 degrees brought out a large crowd. The moonlight allowed people to walk with no flashlight, and the warmth made waiting and watching much more tolerable than the usual wintertime light shows.

Joan and I scanned the sky to the north, hoping the green pulse would increase. The graceful bands of light swayed ever so smoothly and slowly, not far above us. As time went on, their intensity grew, as did the crowd. When a light wave made a sudden and quick move, like a flag flapping in a strong wind, there were more than a few “oohhs” and “ahhhs.” As the light power intensified, so did the pointing and the exclamations.

Getting a Different View

After taking a few photos, it was time to find another vantage point. We had our pick: The lights seemed to radiate from horizon to horizon, with no end in sight. I’m always on the lookout for a photo of the aurora reflected in water, so we drove to Lake Hood.

At the lakeshore, the lights had moved even further to the west and were now swirling directly above us. Some kind of intense light band was happening everywhere we looked, despite light pollution from the nearby Anchorage airport and other buildings.

I was thrilled we had come down this way. The lake water indeed reflected the lights above, and the uniqueness of the many float planes moored there made for an exceptional foregroundin my photos. It was nearing 2:30 a.m., but the lights didn’t seem like they would fade anytime soon. Joan however, was fading. I dropped her off at home and drove south of Anchorage, along Turnagain Arm, where there would be much less light effluence.

...it seemed the heavens had opened up. Light was twirling, swirling, waving, and pulsing in every direction.

I reached the McHugh Creek Wayside area by 3 a.m. and took a short hike to a knob over looking the Arm. By this time, it seemed the heavens had opened up. Light was twirling, swirling, waving, and pulsing in every direction. Anticipating this, I had brought two cameras and two tripods and was shooting images to the north, south, and west. Everyone would be talking about this night for a long time, and I couldn’t wait to look at social media to see what others were witnessing.

Finally, at about 4:30 a.m., I had had enough. The nearly full moon was now blood orange and setting on the horizon. It looked like it was the sun just coming up—another amazing photo opp. Yet even with the lights still blazing, it was time to head home; I was exhausted and exhilarated by this magical Alaskan experience. 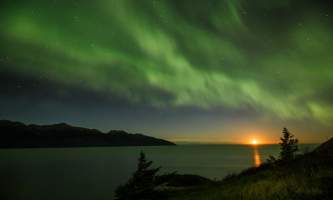