Here’s What Happens When an Alaskan Visits the Arctic

It is the northernmost community in the United States, some 320 miles above the Arctic Circle. It is also a land of extremes, where the temperature rises above freezing only 100 days each year. When the sun sets in mid-November—around the 18th—it doesn’t appear again until January 23. That extreme level of darkness even inspired the setting for a vampire flick called “30 Days of Night."

As an outdoor and nature photographer based in Anchorage, my bucket list includes photographing sunrise on January 23, or capturing a time lapse of the sun at summer solstice. But while I haven’t been to Utgiagvik (formerly known as Barrow) during this period of extreme dark, my visits have given me the chance to learn more about the community and be prepared for a dedicated photo visit. Here’s what I love about it.

Alaska Natives have been hunting whales for thousands of years. And though the practice has been out lawed in the U.S. internationally since 1971 (to prevent over hunting), the International Whaling Commission does allow subsistence hunting by indigenous people, including those in Alaska.

As a result, all coastal villages in the North Slope region of Alaska still engage in this practice, since it’s permitted for registered members of the Alaska Eskimo Whaling Commission (which is headquartered in Utqiagvik). Each coastal community is authorized a certain number of “strikes” (attempts) and landings each whaling season (spring and fall).

And it’s a cause for celebration. When whales are successfully harvested and hauled to the community, everyone participates in the harvest of meat and blubber. The harvest must happen quickly or else the meat could be ruined.

When whales are successfully harvested and hauled to the community, everyone participates in the harvest of meat and blubber. The harvest must happen quickly or else the meat could be ruined.

When walking around the community, it’s easy to see that whaling is an important part of their way of life. The most iconic site in Utqiagvik is in a part of the community called “Browerville,” named after the prominent Brower family. It consists of a set of Bowhead whale bones erected in the ground near the shores of the Chukchi Sea. And on each side is an umiak—the traditional whaling boat, made of a wooden frame and a hull of stretched sealskin. Just outside the high school (nickname: the Whalers), you’ll find another sign: A full Bowhead whale skull.

Hub at the Top of the World

The North Slope is Alaska’s most sparsely populated region: Just seven villages have a total population of 9,400 people, scattered across some 95,000 square miles. Large tracts of protected lands include the Arctic National Wildlife Refuge, Gates of the Arctic National Park, and the Noatak National Preserve. At the top of Alaska, in the middle of it all, sits Utqiagvik.

Because of its location, and its population of more than 4,000 people, Utqiagvik is the economic, political, and governmental center of the northern part of Alaska. With its regular commercial flights, it’s also the most accessible community in the region, with the best-available lodging.

If you ever wanted to dip your toes in the Arctic Ocean, this is the place to come. The long, sandy shoreline makes for great beach strolling. And if you want to stand at the dividing line between the Beaufort and Chukchi Seas, Point Barrow is only nine miles away from the heart of the community

Aside from exploring the stark beauty of the Arctic coastline, there are ways to enjoy the culture of the Iñupiat people. A variety of tour companies offer day tours to Utqiagvik to explore the history and culture of the community. If you’re in the village on your own, take the time to visit the Iñupiat Heritage Center. And if you can, simply walk around and explore—just keep an eye out for polar bears! 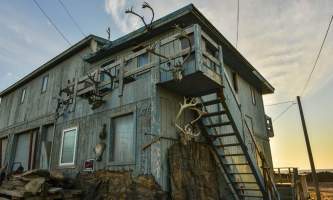 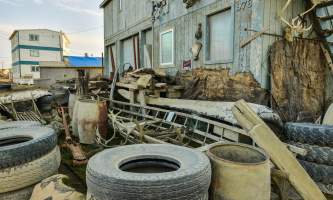 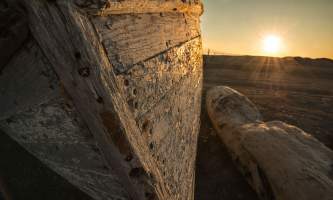