Sitting comfortable on a flat-decked pontoon boat, we watched a huge brown bear poised motionlessly on a rock, staring at the water, patiently waiting for its unsuspecting quarry to come within striking distance. Suddenly, in a split-second, this 800-pound beast dove, head-down, paws and claws outstretched, into the crystal-clear water. Like a magician pulling a rabbit out of a hat, he came up with a wriggling, red-colored salmon clenched safely in its powerful jaws. A perfect Alaska experience.

Welcome to Redoubt Bay, a bear-watching haven at the entrance to Lake Clark National Park, just 50 miles southwest of Anchorage. The only place to stay around here is Redoubt Bay Lodge, a small, rustic inn set on five magnificent acres. And getting here is part of the fun, via a spectacular 30-minute floatplane flight from Anchorage. As a professional photographer who lives in Alaska's capital city, I'm always looking for great wildlife shots, and my wife and I are always looking for fun. So another couple joined us for a quick, adventure-filled getaway to Redoubt Bay.

The lodge's pontoon boat makes for great bear viewing; it allowed us all ample room to move and find a good vantage point as we watched bears fishing for salmon. They all had their own techniques. One did the "snorkel move," diving down quickly when a salmon swam by. Another used the "wade and pounce" method.

The most hilarious and action-packed one was what we called the "lunge, jump, and swipe" system. With its eyes locked on a target, the bear would make a quick lunge, jaws open. If and when the bear missed, it would rapidly jump to where the salmon had darted, and it that didn't succeed, he swiped with both paws to try and hurl the fish out of the water. It seemed like a desperation attempt and never yielded positive results, but it surely made for great laughter from us—and some great photos.

After several hours of delightful bear watching, lunch was waiting back at the log-built lodge. We had out choice of store-bought beef or recently caught salmon burgers. The salmon ran out quickly.

With stomachs full, it was time to try out own luck at fishing. Each couple was paired with a fishing guide and assigned an aluminum, five-person motorboat. The fishing expert individually outfitted us with appropriate gear—spin or fly, as desired. We all chose spinning.

Our mission: to hook the acrobatic, fighting, Silver salmon (aka: Coho). Now, away from the lakeshore, we could fully savor the wilderness. The mountains of the Alaska Range, and the lapping of the lake water on the boat side created a calming and relaxing atmosphere.

Our mission: to hook the acrobatic, fighting, Silver salmon (aka: Coho). Now, away from the lakeshore, we could fully savor the wilderness.

We cast the silver and red hardware into the water, plastering the area with flashy bait for 10 minutes before our friends shouted "Fish-on!" True to form, the catch repeatedly leaped and soared before succumbing to the guide's net. We had meat to take home.

Following another hour-plus of fishing—and with three more catches in the icebox—the guides motored around the lake to show us the sights. At the far end, they putted our boats into the shallow and narrow creek feeding the lake, hoping to see a black bear, which favor dense vegetation. None showed up, however, so we headed back to the lodge and our individual cabins to rest up for our early kayaking adventure the next day.

Out on the Water

Fueled up with Alaska's classic breakfast of reindeer sausage and eggs, we headed down to the dock and climbed into our kayaks. After hugging the shoreline for a time to get comfortable in our new rides, we began to venture further out. The air and water were both calm as we heard the laughing sound of a loon. With the combination of early morning light, no human sounds, the towering snow-capped mountains in the distance, and a reclining seat position, the excursion went beyond our wildest expectations of a tranquil, extra-sensory experience.

It was one we savored for the next several hours, as we slowly and intimately investigated the shoreline from the comfort of the kayaks. We found odd-looking tree trunks and discovered just how well dragonflies were able to mate in flight.

Sooner than we hoped, the floatplane was landing and out brief stay here was over. Fortunately, another spectacular flight with amazing views of the Alaska Range helped make up for the disappointment that this adventure was over. 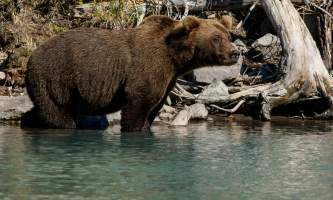