Our 7 a.m. stroll was still not early enough to catch the sunrise: In July, the “midnight sun” comes up just after 5 a.m. But our timely rising had afforded us a tranquil start to the day, as the low-angled sun skimmed under a cloudbank and across the tundra. Thin fog rose like smoke from ponds, creating a mood from “On Golden Pond” as the sun glistened off the dew.

I was here with my wife, and we hoped the fog would lift for our day canoeing Wonder Lake. Denali’s largest road-accessible lake—3.5 miles long and 1 mile wide—also comes (on clear days) with unbeatable reflections of surrounding mountains, and as a professional photographer based in Anchorage, I’m always looking to capture beautiful images. But for now, the stillness and solitude were enough. And here, 90 miles into Denali National Park at the end of the Park Road, we had lots of it.

Rounding a bend on our approach to the west end of Wonder Lake, clouds concealed the majority of “The Mountain” (aka Denali). We weren’t sure whether Mother Nature would reveal Alaska’s crown jewel, but either way, we were excited for the day.

We slid our canoe into the glass-calm liquid, hoping for a view of The Mountain as well as an encounter with a moose or maybe a caribou or two. Not being the most experienced paddlers, it made sense to hug the shoreline. The lake is 250 feet deep, and, we heard, less than 40 degrees. Staying close to shore bolstered our confidence in case of a mishap.

We rarely spoke; when we did, it came in whispers. We felt as if we had the place to ourselves...

We quickly realized an additional benefit of this strategy: Being able to scrutinize, at a slow pace, the tundra, trees, grasses, squirrels, and birds. Many times, we would stop paddling and simply listen, watch, and be immersed in this wild area as we silently glided forward. Binoculars came in handy to look for wildlife or antlers in the forest ahead. We rarely spoke; when we did, it came in whispers. We felt as if we had the place to ourselves; even though the Park Road wasn’t far from here, we couldn’t see or hear it.

A little over an hour later, the sky was undeniably increasing in blue. The veil of clouds had dissipated greatly since the morning, and we could now make out The Mountain quite well. It was glorious.

With The Mountain emerging, we landed the canoe and sauntered onto the tundra, to sit and relish the peacefulness. The tundra here was spongier than other places we had been—in fact, our feet sunk in almost a foot deep, our hiking boots enveloped in the mossy vegetation. It became quite a workout, as each step required additional height. Fortunately, as the elevation increased, the sponginess gave way to a more solid surface.

Then, after a 15-minute gradual uphill hike, we saw something. Down below us, and off to our right 200 yards, a set of antlers was slowly moving: a lone bull caribou with a huge rack. We stopped in our tracks and sat down, blissfully awed. The mountain was out and a caribou was nearby. While the two didn’t line up for a photo, the experience was everything we’d hoped for. The bull moved among the green and brown willow shrubs, at times completely camouflaged.

He continued to walk, ever so slowly, toward the lake, closer and closer to lining up with Denali and creating what would be a dream photo. Finally, after 30 minutes of watching the bull gradually grazing its way along, the two became one: a bull caribou and Denali in a single frame. As fast as I snapped the photo, the animal continued over a ridge and vanished—but the photo and the memory will last forever. 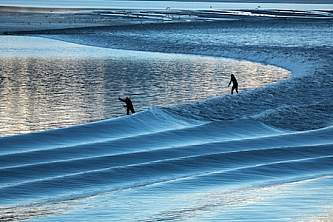 There are some 60 bore tides around the plan­et, but Tur­na­gain Arm is one of the world’s biggest.