Experiencing the Magic of an Alaskan Waterfall

“This forest is so dense it’s like something out of Lord of the Rings,” said my friend Ron. He was right—it’s amazing what a rainforest can produce when every day brings more than 20 hours of day light for several months each year.

We were 40 minutes south of Anchorage at the tiny hamlet of Girdwood to explore an area even many local Alaskans don’t know about: Virgin Creek Falls is one of those Alaskan gems hidden in plain sight. The trailhead is located next to residential homes, at the end of Timberline Drive—one of the town’s main arteries. Step out of the car and immediately you can hear the rushing of Virgin Creek.

The hike to the falls is quite short, maybe ¼-mile on an uphill, single-track trail of dirt and mud, with lots of exposed tree roots. Everywhere you look is green, green, and more green. Plants are crammed into the hillside. Moss clings to thick branches of hemlock. Soon after you begin the hike, a glimpse of the creek appears through the menagerie of leaves, branches, ferns, and trunks.

As our small group hiked, the noise grew louder and we knew we were nearing the falls. The air became moist with the mist of the crashing water. The steep hillside on the other side of the creek was a green and yellowish blanket of moss that enveloped even the downed tree trunks. It certainly seemed like traveling on that side of the ravine meant being swallowed by the deep, live cushion of undergrowth.

We followed the edge of a cliff, which dropped straight down to the whooshing creek water. The sound became thunderous as it bolted down over rock and logs. And then there it was. A waterfall. A small, simple waterfall below us—hardly Niagara Falls, but it had an alluring, magical charm. And we were so close to it that the encounter felt very intimate.

A small, simple waterfall below us—hardly Niagara Falls, but it had an alluring, magical charm. And we were so close to it that the encounter felt very intimate.

We took out our tripods to take some long-exposure photos and capture the silky-smooth look of the water. After finding several vantage points up high, we hiked down the steep and wet bank to the water’s edge. From here, the early morning sunlight streamed into the forest, the rays creating an ethereal look as they cut through the spray of airborne water.

After creating some memorable images, the trail beckoned us to explore further. The path quickly narrowed and became much steeper as it wound away from the creek and into the woodland.

Less than 100 yards later and some 75 feet higher, the trail took us back near the water, which crashed down an ultra-steep, narrow ravine covered in moss. The ground grew wetter as we approached this vantage point, the leaves swaying in the breeze created by another waterfall.

The trail continued up as the water continued to flow down. Like a Siren’s call, the water’s rushing and the trail’s intrigue begged us onward. For another half-mile, we stopped here and there to take a few more photos and enjoy the peacefulness of the constant drumming sound.

It was a simple hike to a magical place that we will go back to again and again. 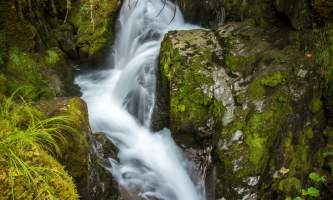