It was a warm autumn as I stepped out of the Piper 31-350 Navajo onto the airstrip at Anaktuvuk Pass—a small town nestled in the heart of the Central Brooks Range, above the Arctic Circle in Alaska. Like most villages, the airport consists of an airstrip and not much else.

To get here, I had driven six and a half hours north of Anchorage to Fairbanks, and then flew 252 miles to the village. An Alaska outdoor and nature photographer, I had come to photograph the traditional autumn subsistence caribou hunt. The majority of the residents here are Alaska Native, with the few non-Natives working for the government as teachers, administrators, and park rangers.

The Alaska Natives who live here are Nunamiut—the last nomadic band of indigenous people in North America back in the middle of the 20th century. In 1949, though, they started putting down roots. And as caribou hunters, they chose a place squarely in the path of the caribou migrations, and gave it a name—Anaktuvuk—that translates to “place of caribou droppings.”

My host here was local resident Mickey Paneak, whose family was the last to settle in the village in 1961. Mickey’s father, Raymond, was 21 at the time.

It was a fascinating visit. First, there are no paved roads. Due to the prevalence of permafrost in the area, most structures sit on short stilts rather than directly on the ground. And there are far more ATVs on the road than typical motor vehicles.

Also, like many places in the Alaskan bush, things are very expensive. Gasoline was $9 per gallon. A case of soda (which everyone calls “pop”) goes for $34. The village corporation grocery store carried a lot of processed foods but no fresh produce. And there was much more Sailor Boy Pilot Bread—which is quite popular in Alaska—than Nabisco Saltine Crackers.

When I asked Raymond Paneak about one of the things that concerned him about changes to his community, he expressed dismay over the abundance of junk food and soda. It’s a concern that many in the community share.

A Life Centered Around Caribou

Caribou remains essential to those who live in Anaktuvuk Pass, and the fall caribou hunt—which I had come to photograph—is one of the year’s most important events.

It has not always gone smoothly. When Gates of the Arctic National Park was created in 1980, it surrounded the village, and caribou became more difficult to reach. So the Nunamiut started using ATVs to hunt them. But the Park Service said that was illegal—that only traditional transportation could be used in the park for subsistence hunting. The battle escalated; it took 16 years and two acts of Congress for the residents of Anaktuvuk Pass to legally hunt using ATVs.

Not surprisingly, then, we rode ATVs when I joined Raymond and Mickey on daily forays along the John River corridor, seeking out tutu (the Inupiaq word for caribou). We never found any, as it was quite hot. But it was an incredible opportunity to spend time with the Paneaks and others, from a group of younger people to elders at their remote caribou hunting camp.

I also asked why they hang empty soda cans on their racks of panuktuk (dried caribou). They said it was a warning system, in case a bear tries to steal their food while they’re sleeping in nearby tents.

The elders explained things like how the hot temperatures kept the caribou in hiding. I also asked why they hang empty soda cans on their racks of panuktuk (dried caribou). They said it was a warning system, in case a bear tries to steal their food while they’re sleeping in nearby tents.

From the Nunamiut people to how Anaktuvuk Pass came to exist, there’s an amazing history behind the community. As a result, it’s been studied ad nauseam by anthropologists. The town also gets daily visits of small tour groups, wandering around town with a guide and taking pictures

But having a connection with the Paneaks gave me a great opportunity to avoid the tourist trappings and truly learn about the culture. And that made Anaktuvuk Pass one of my favorite Alaska Native villages to visit. 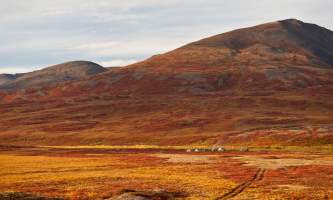 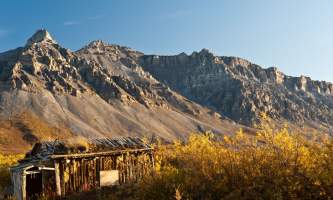 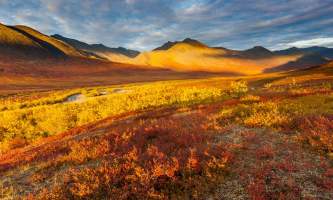 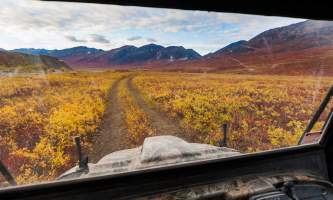 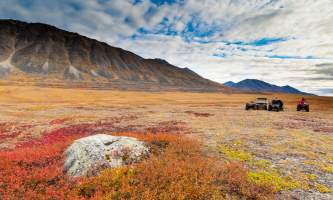