Adventures with Alaskan Wildlife on the Katmai Coast

“Crawl up to the edge of the grass and look down—just don’t peek your head up too far or the eagle may get spooked and fly off.” These were the cautionary words of my guide after we made a quarter-mile bushwhacking trip for a top-side view of an occupied bald eagle nest.

This is exactly the kind of unique experience I was looking for out on the rugged, unspoiled 500-mile coastline southwest of Anchorage known as the Katmai Coast. I was here solo, staying at a remote lodge on the coast. As a professional photographer based in Anchorage for 40-plus years, I had come here to scout the area as a potential future photo workshop site.

The June afternoon was sunny and warm, and the Alaskan brown bears I had mainly come to see and photograph were likely sitting in the shade. But since the area was teeming with other wildlife, our guide had suggested the hike to the bald eagle nest.

I’ve never had a better, more unobstructed view of one. Below me, perhaps 25 feet, were an adult bald eagle and two eaglets. Because there aren’t many trees in this area for eagles to build their nests, they do it instead in a rocky outcropping in grass, away from likely predators such as bears and wolves. Our group took turns looking, with two people at a time, on our bellies, with only our foreheads and eyes cresting the grassy knoll. After five minutes without anyone spying, the next pair would have their look.

Part of this area’s attractiveness is the easy accessibility, by boat, to a plethora of flora and fauna. During each of our three days, our guide let the weather and wildlife dictate the plan. Based on 25-plus years of experience, he would make a few suggestions; we’d pick one and go.

Bald eagles were a constant sighting: soaring, perched, nesting, and diving for the salmon that leaped from the sea. In nearly all the waters we traveled, we enjoyed the company of sea otters frolicking and doing the backstroke.

At one point, we approached a small island, near low tide, and spotted what looked like identical rocks. Examining with binoculars, though, it was a colony of seals. Most were asleep; those that weren’t would sluggishly open their eyes, roll their heads our way and, sensing no threat, rollback to nap. A number of them had a portion of their head and bodies submerged, with the remaining half warming in the sun. When they lifted their heads, their faces looked like the mask from Phantom of the Opera.

At one point, we approached a small island, near low tide, and spotted what looked like identical rocks. Examining with binoculars, though, it was a colony of seals.

Around every corner, though, I was hoping to see a big bear—either walking the shoreline or looking for a salmon meal in one of the rivers. Seeing none, but getting hungry, our captain and guide grounded the boat on a sandy beach for a shore excursion. A short, uphill trek on a very narrow trail led us to a small meadow-like area on a cliff side overlooking a bay, with the snow-covered Katmai Mountains in the far distance—a postcard-perfect view.

After a few more hours of sailing the coast, we got lucky. On a ridge, perhaps 100 feet above us, a brown bear and three cubs walked in our direction. Had the sow not stood up and looked our way, I doubt we would have noticed them. Following the trio by boat, we saw the cubs playing with a stick, falling so far behind mom that she had to huff for them to catch up. At another point, the mother led them down from the high ridge to the rocky, mussel-lined shoreline. With much more room to maneuver, the cubs became like rambunctious kids, running circles around their mother.

We got a full hour to enjoy the family antics—an amazing treat. Then it was back to the lodge for happy hour and a delicious, home-cooked meal before I was off to my private cabin to rest up for the next day of adventure. 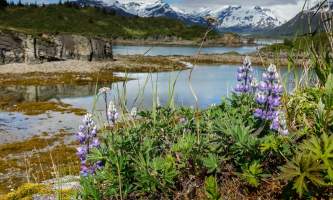