A Spectacular Helicopter Ride Over a Glacier

Our group stepped out of the helicopter, after a 20-minute flight over icebergs and close to the face of a glacier. Even better, the helicopter’s door shad been off and we had been taking aerial photographs of the spectacular surroundings. Now, hair tousled and smiling ear to ear, everyone was chatting with excitement.

I could relate. As a professional photographer who’s lived in Anchorage for 40-plus years, this was a trip I had taken before, but the surreal landscape always provides a thrill. And it was exciting to see that same thrill on the faces of others—in this case, the students I was leading as part of a one-day Alaska landscape photo workshop.

We had taken off from Knik River Lodge, about an hour’s drive northeast of Anchorage, then flown up the Knik River Valley and over the spectacular Knik Glacier. After landing at the terminal moraine of Colony Glacier, adjacent to the iceberg-studded Inner Lake George, the group gasped in awe at the sheer beauty of the bowl we were in. Surrounding us on three sides were the steep, snow-covered Chugach Mountains. In front of us lay the glacial, gray-colored lake, with icebergs of every shape and size acting like bobbers. And on the other side of the lake, a couple miles away, acascading glacial ice sheet snaked its way down a serpentine valley.

The previous evening had involved classroom lessons, and today was the hands-on training. This class focused on composition and depth of field, adding or subtracting elements in the photo; the goal was to keep the viewer’s eye going around the frame (instead of sliding out one of the sides) and to keep everything in focus.

The students also had a chance to explore on their own, hiking anywhere along the 4-mile-long lakeshore. They just needed to have a two-way radio and bear spray, as black bears were known to cross from one side of the valley to the other along this area.

The group got right to it—some hiking uphill to get better sense of the grand scale of the area, while others decided to saunter down to the lakeshore for a more up-close view of the ice bergs.

This place is so magical that at some point, nearly everyone takes a seat on a rock and simply stares at the beauty, soaking up the vastness and the wildness of Alaska, as if life is standing still and the cares of the world have disappeared. Usually there are no other humans around—just you and nature.

This place is so magical that at some point, nearly everyone takes a seat on a rock and simply stares at the beauty, soaking up the vastness and the wildness of Alaska, as if life is standing still and the cares of the world have disappeared.

And what nature that is. The icebergs create many patterns, which keep photographers entranced. Moving just a few feet up the hillside or along the shore offers a completely new perspective, as a new world opens up the senses.

Soon the helicopters returned and whisked us away. On our trip back, I asked the pilots to take us over an area of Knik Glacier where the group could photograph crevasses of an icefall, which seemed to unfold from the massive glacier behind. After hovering there for photos, we were off to search for pools of blue water on top of the whiteness. We found several ,and the pilot made 360-degree turns around one of them, so each guest had time to capture different angles.

Ten minutes later, after passing over a cow moose wading in a small lake, the helicopter gently touched down at Knik River Lodge: Back to reality after a great day in the Alaskan wilderness. 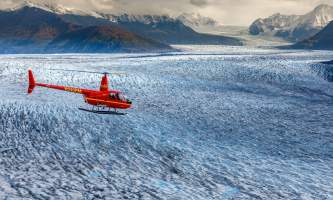