A Day of Magical Wildlife Encounters in Denali

Our tour bus approached Eielson Visitor Center—66 miles inside Denali National Park—at 7a.m. on an extremely foggy, thicker-than-pea-soup summer morning. It was so early, even the park rangers hadn’t shown up yet.

I was here on a week long tour with a group of ambitious hikers, and we wanted to beat the crowds on our way to a 6-hour secluded hike. As a professional photographer based in Anchorage for the past 40 years, I’ve visited Denali many times, but I’m always looking to capture more amazing photos—and Denali never disappoints.

Nature didn’t take long to work its magic. As we rounded the corner of the visitor center, several voices shouted, “Stop!” to the driver. A flock of 10 ptarmigan birds were off to our left, their speckled brown feathers blending into the surrounding brush. With no one around, the driver turned off the engine; we pulled down our windows and gawked with binoculars, cameras, or the naked eye. The birds were less interested in us. They ambled along, their heads bobbing. Every so often, one or two would sound off with their infamous Popeye-like, rapid-fire laugh: “Cluuuuckkkk, cluuuuckkkk, cluuuuckkkk.”

It wasn’t the grizzly, moose, or caribou we had hoped to see, but their extremely close proximity, the size of the flock, and their camouflaged coats made for a unique experience. They were just fun to watch and listen to.

But no one’s ever really alone in Denali. “Fox...fox,” someone in the back whispered, loudly enough for others to hear. Soon, the “Fox...fox” whisper had daisy-chained to the front of the bus. Sure enough, a red fox was stalking the state birds; Mother Nature in the raw. We kept quiet and observed.

The fox, head down and eyes glued on its prey, was slipping in like a cat on a mouse, each footstep slow and methodical. Suddenly, the flock began to run and fly off, clucking as they went and landing nearby. Our eyes turned to see what the fox would do, but it was gone, vanished. Still, just seeing the beginning of a hunt had made our morning a most special one—and we hadn’t even left the visitor center area yet.

Heading Out on Foot

We were excited to experience more of nature’s wonders. As the fog began to lift, we donned our daypacks and headed down a gravel trail that snaked out from the visitor center.

The fog was now lifting and we could see across the valley to 5,800-foot Mt. Eielson. I was hopeful that perhaps the peak of Denali would appear during our saunter, but that would turnout to be wishful thinking. It was gorgeous nonetheless. The dribbles of water on the tundra made the variegated color appear even more saturated, and patches of wildflowers seemed even more colorful in the overcast than when I had seen them in sunlight.

Fortunately, this was a leisurely hike; we got off the trail and checked out the various wildflowers in up-close detail. It wasn’t all we saw: Not far from a patch of blossoms, one person in our group came across a bleached, bull moose skull with antlers. It was a symbol of the solitude we were experiencing, with the air around us filled only by the sound of birds.

After an hour, the marked trail ended, and we found ourselves in free-range tundra, where nature was about to amaze us once again.

“Stop, STOP...WAIT!” our leader nearly shouted, breaking the silence. “I think I see movement over that rise.” We whipped our heads around and there it was: A majestic grizzly bear, one of 300 or so in the park, meandering perpendicular to us with its head down. As per proper bear protocol, we massed together and made noise to alert the animal to our presence so it wouldn’t be threatened or surprised.

We whipped our heads around and there it was: A majestic grizzly bear, one of 300 or so in the park, meandering perpendicular to us with its head down.

The park’s rule is to avoid bears and not approach them by more than ¼-mile, but this animal was closer than that already. We watched as this bruin zigzagged left, right, up, and back. It was unclear just what its intended direction might be, so we slowly retreated, still mesmerized, casting backwards glances at this mountain monarch. 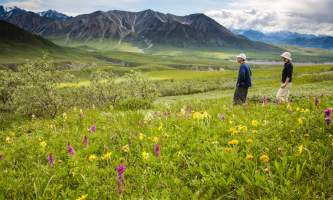