Experience the Alaska of 100 years ago! Pioneer Park is an historic village that features original buildings moved from downtown Fairbanks, as well as museums and a Gold Rush town street. But it’s also a theme park with a carousel and train that runs the perimeter, shops, and restaurants. Stay a few hours or spend a full day; Pioneer Park offers fun for the whole family.

Take a spin on the carousel, explore the historic sternwheeler, and hop the train that chugs around the park’s perimeter. Then drop by Mining Valley, where old pieces of equipment and signage give you a great feel for what local mining was like. Feeling active? Play the 3-hole disc golf course, then rent a canoe or kayak the Chena River. Shoppers can browse the stores, while art lovers can peruse the fine sculptures and paintings in Bear Gallery. Grab a bite at one of the restaurants, which range from American to Asian to Mediterranean, and enjoy your meal at one of the picnic tables along the river. And be sure to stay for the nightly salmon bake and dinner show about the colorful characters who came here in search of gold.

Pioneer Park is open all winter! While the shops and restaurants close for the season, you can still walk around and get a feel for Alaska’s early years. It’s also a good place to get into the holiday spirit; there’s a tree-lighting ceremony on the Saturday after Thanksgiving each year, and the holiday lights stay up through March. And don’t miss a stop at Bear Gallery (winter hours: 12 p.m.–6 p.m. Tuesday–Saturday) to check out the fine art on display.

Pioneer Park opened in 1967 as part of the Alaska ‘67 Centennial Exposition, celebrating the 100th anniversary of Alaska’s purchase from Russia. The park featured a zoo and rides in those early days, when it was known as Alaska 67 and then Alaskaland. The name was changed to Pioneer Park in 2001, to reflect its focus on history.

The surrounding area also has a fascinating past. Along the park’s northern border lies the Chena River, a name of Athabascan origin derived from “che” (meaning “stick”) and “na” (meaning “river”)—the Stick River. It was this river that Fairbanks’ founding father, E.T. Barnette, traveled up in 1901. He was searching for the town of Tanana Crossing (now called Tanacross), where he hoped to establish a trading post. But his boat, the Lavelle Young, hit a sandbar, and he was forced to spend the winter along the banks of the Chena River. The following spring, miner Felix Pedro found gold in the surrounding hills, and Barnette decided to stay and establish his trading post there. That early community was known as Barnette’s Cache. Within a year, however, it became known as Fairbanks, named after Indiana Senator Charles Fairbanks (who went on to serve as Theodore Roosevelt’s Vice President during Roosevelt’s second term). 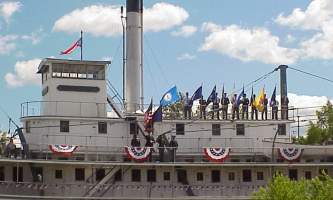 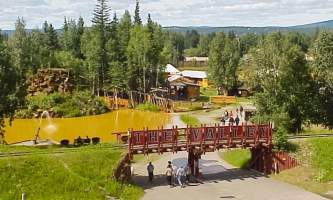 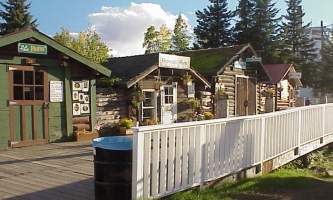 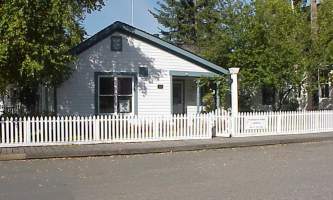 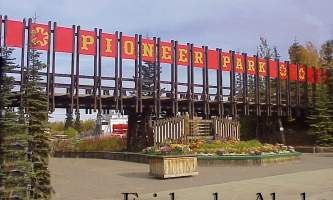 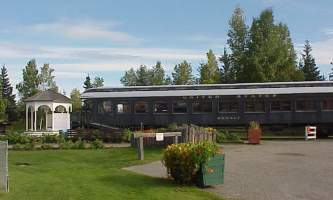 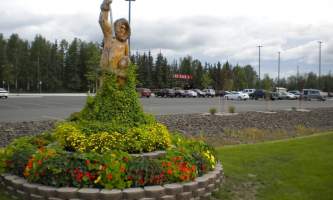 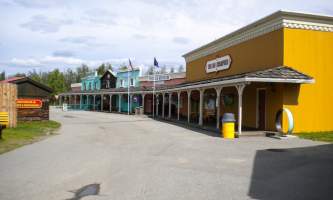 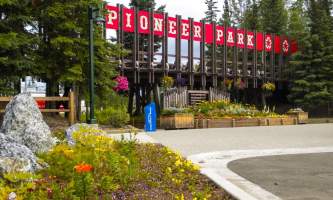 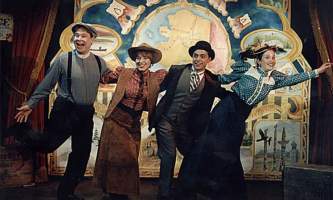 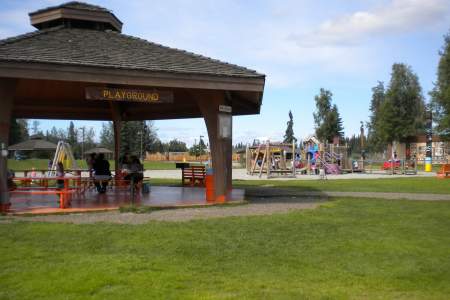 A Fair­banks fam­i­ly favorite, the play­ground is locat­ed at the cen­ter of the park and is designed for sev­er­al age groups with an ani­mal train and three climbers. (Stay tuned for the new cable climber and ADA acces­si­ble play equip­ment sched­uled for instal­la­tion in the fall of 2011!) 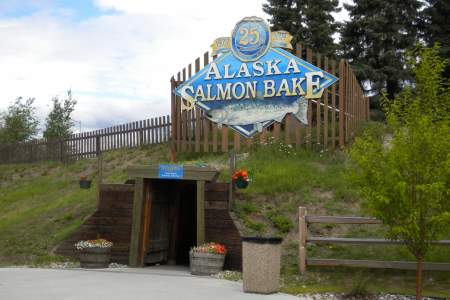 Look­ing for a relaxed din­ner after a busy day of adven­tures? Head to the Alas­ka Salmon Bake — the only one in Fair­banks — where you’ll enjoy all the food you like, sur­round­ed by a his­toric park filled with old build­ings and min­ing equip­ment. Take your pick of Fire Grilled Alaskan salmon, Beer Bat­tered Cod, or prime rib, cooked to perfection.

These night­ly music per­for­mances are spon­sored by the Fair­banks Arts Asso­ci­a­tion. They are held at the gaze­bo at 7 p.m. through­out the sum­mer. Bring a chair or blan­ket to sit on as bench seat­ing is lim­it­ed. Admis­sion: Free.

Alaska Centennial Ctr for the Arts 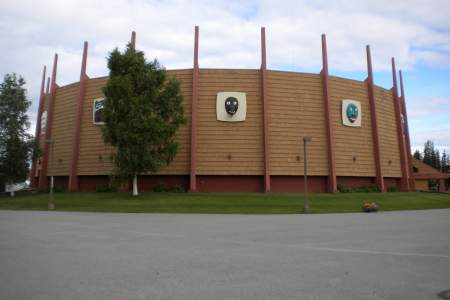 Alaska Centennial Ctr for the Arts

On the north side of the park along the edge of the Chena Riv­er, sits Alas­ka Out­door Rentals &…

On the north side of the park along the edge of the Chena Riv­er, sits Alas­ka Out­door Rentals & Guides pro­vid­ing one of Fair­banks’ few, out­door fam­i­ly adven­ture activ­i­ties. Alas­ka Out­doors rents kayaks, canoes, and bicy­cles for half-days, a day, or by the week. In addi­tion, they out­fits adven­tur­ers and hunters for wilder­ness, fly-in trips, they have a retail store for pad­dling gear, and they are the local deal­er for Thule cargo…  ...more

Pio­neer Park is home to an antique carousel that was built between 1915 and 1920, and brought to Fair­banks from…

Pio­neer Park is home to an antique carousel that was built between 1915 and 1920, and brought to Fair­banks from Kirk­wood, Illi­nois. The ride is open from noon to 8pm every day through­out the summer.

Pio­neer Hall was designed to rep­re­sent a fine 1900’s era build­ing. It hous­es two his­tor­i­cal attrac­tions: The Pio­neer Muse­um which…

Pio­neer Hall was designed to rep­re­sent a fine 1900’s era build­ing. It hous­es two his­tor­i­cal attrac­tions: The Pio­neer Muse­um which is filled with fas­ci­nat­ing arti­facts of ear­ly Fair­banks. The set­tlers of Fair­banks prob­a­bly would have been sur­prised if they had known their every­day uten­sils would one day be on dis­play in a muse­um. Few of the museum’s pieces are a hun­dred years old. Not very old by most muse­um stan­dards, but their val­ue is…  ...more 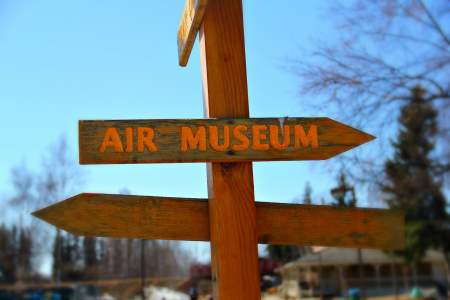 You can’t miss it — the muse­um looks like a round gold­en air­plane hangar with a mod­el air­craft from Air North mount­ed on beams out­side in a sim­u­lat­ed take-off. Inside, you’ll find a few of the ear­li­est air­craft in the state from the 1930s and 1940s used in mil­i­tary, com­mer­cial, and bush flights. All this is inter­pret­ed for vis­i­tors by local experts, who have lived and breathed the avi­a­tion indus­try for decades in Fair­banks, and shared it here  ...more 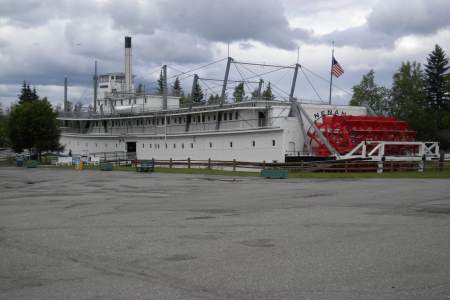 The River­boat Nenana is a stern­wheel­er, nick­named the ​“Queen of the Yukon.” She was com­mis­sioned by the Alas­ka Rail­road and built in 1933. Her parts were made in Seat­tle and then shipped to Nenana, Alas­ka where she was con­struct­ed. She plied the Tanana and Yukon Rivers from 1933 to 1954, and her pri­ma­ry run was between Nenana and Mar­shall — a dis­tance of about 858 miles. She also ran twice a month from May through Sep­tem­ber. The River­boat Nenana…  ...more 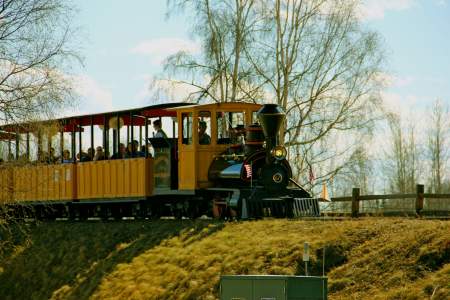 The gold rush that start­ed Fair­banks relied heav­i­ly on an ear­ly rail­road to quick­ly and effi­cient­ly move peo­ple and valu­able goods along a string of mines and sup­port­ing com­mu­ni­ties. The Tanana Val­ley Rail­road Muse­um illus­trates the role of this rail­road in Fair­banks’ first indus­try through his­tor­i­cal exhibits, inter­pre­tive train rides, and on-site restoration.