Come to this Anchorage institution and you'll see how Alaska Native history is not a collection of artifacts behind glass: this is a living, dynamic culture that you can experience firsthand.

It's no surprise this is one of Alaska’s most popular attractions. When you stop by the main stage, you can listen to storytellers share their stories that have been passed down for generations. Or, watch a performance where dancers of all ages wear ceremonial outfits—blinged out tunics with beads and red-and-black paint—and dance in time with drums made of animal hides. The setting is so small and intimate that visitors are sometimes even invited to join the dancers on stage.

Of course, you can also see plenty of crafts and handiwork: beautifully adorned moose hide boots, birch bark baskets, and tunics made from seal hide. Outside, you can check out the life-sized traditional native dwellings—like a Supiaq, a semi-subterranean home built by the Alutiqs to shelter themselves from the harsh Alaskan climate. Or, enter a Haida Longhouse—large wooden constructions with no windows and only a smoke hole at the top—that generally housed several families.

Size doesn’t always matter when it comes to Alaska museums. Most towns you visit in Alaska will have a cultural museum worth visiting—even if it is a tiny one in Cordova, Nome, Seward or Eagle. The folks who work in them are often historians, and they love to share local lore and interesting facts with you.

If you make it as far north as Barrow, for instance, you shouldn’t miss the Inupiat Heritage Museum, which is outstanding. The entry alone is pretty dramatic: there’s an enormous whale skull by the front door, foreshadowing the primary focus of the museum—whaling.

At the Anchorage Museum, meanwhile, you can view hundreds of intricate crafts: ceremonial masks, ivory carvings, clothing made from animal hides, and tools made from mastodon tusks. This museum has pretty solid street cred, too: the Smithsonian has loaned over 600 artifacts back to Alaska, their place of origin.

Other must-see cultural museums include the UA Museum of the North in Fairbanks—where a giant wooly mammoth skull and tusks steal the show—and the Sheldon Jackson Museum in Sitka whose collection was started by a Presbyterian missionary in the 1890s.

Make it to Barrow

If you want a truly hands-on cultural experience—and small-town visit like nothing else in the world—head to the northernmost point on the continent, Barrow. Located 330 miles north of the Arctic Circle, it’s the largest Eskimo village in the world, and one of the few places where life is still largely dictated by the natural environment and animal behavior. In this case, that means whaling season.

Indeed, the best time to come here is June, when you can participate in the whaling festival, and really feel like you're a part of the community. They tend to have one or two festival dates scheduled during any given summer—planned around a whale hunt—but the first part of the festival is usually around solstice, or June 24-25. To pin down the dates in any year, we recommend calling Barrow's Top of the World Hotel.

If you don’t make it for the festival, however, there’s still plenty to see here. Throughout the summer, you can take a guided full-day tour or overnight excursion to Barrow. Just keep this in mind: Trips to Barrow tend to be relatively pricey ($500+ per person), due to its remote location and the infrequent flights. Travel insurance is always recommended, too, because weather can change rather quickly in the north. At the very least, be sure to leave yourself some wiggle room on either side of an arctic excursion.

Fly to a Village

Want the real deal? Fly to a native village, which about as far from a tourist trap as you can imagine. You can do it on your own or as a part of a guided tour—and we think you’ll find this to be an authentic and very rewarding experience.

The most popular village tour is the Alaska Airlines day or overnight tour to Barrow: The harsh climate, simple buildings, and warm people are unforgettable, and you’ll get a lot of insight from your guide. But an even more adventurous way to experience a village is to fly to one on your own. Take Bering Air to the villages near Nome, or Warbelow Air Ventures to some villages around Fairbanks. Granted, many small villages aren’t set up for tourism, so don’t expect museums, cultural centers, or even hotels—but you can usually find a B&B.

But the charms are very personal: You can walk the dirt streets, strike up conversations with locals, and get a vivid—but friendly—look at village life. For more specific advice on village trips, call Matt at Northern Alaska Tour Company.

Walk Among the Totems

They’re like three dimensional murals—hand-crafted celebrations of a still-thriving culture. Totem poles were created to tell stories: sometimes, they tell of legends, the histories of a family, or to commemorate certain people. When you explore a totem pole park, you get an up-close appreciation of the dynamic—and still thriving—Alaska Native communities.

Totems have long been skillfully crafted by the native cultures in Southeast Alaska, primarily Tlingit and Haidi. Such art was able to flourish around here thanks to the milder climate and rich natural resources, which allowed more time for recreation. Averaging about 25 to 30 feet tall, totems are typically carved with images from the environment—such as animals, berries, and plants. While older totems have no color, the more modern poles are decorated with paints from natural pigments to create black, red, and sometimes blue or green.

There are a few parks throughout southeast Alaska where you can see collections of totems—often, up to 20 of them spread throughout a forested area. The Totem Heritage Center in Ketchikan houses the largest collection of original 19th century totems where you can see visible wear-and-tear on the wood. Not too far away, at the Totem Bight State Historical Park, you can see restored totems as well as new totems that are being created as the craft is passed down through the generations. At the Alaska Rainforest Sanctuary you can observe a carver at work.

A nice bonus: Admission prices are low to the historical centers and totem parks, so this is a nicely affordable cultural experience.

Step Back into Russia's History with Alaskan Culture

In certain pockets of Alaska, you can get a vivid look at the Alaska that might have been. Before the United States purchased Alaska in 1867, Russia had staked their claim on the land. The Russians’ biggest attraction here was the fur trade: Sea otter pelts were the primary prize, but fur seals, beaver, and fox were hot items, too.

That time is long gone, but in a few areas across southcentral and southeast Alaska, you can still explore some remnants of Russian settlements, and the effects that era had on Alaska and its indigenous peoples. The most famous spot is Sitka, where the Russian established their headquarters in 1799. Here you can visit St. Michael's Cathedral, the first Russian church in America. The original was built between 1844 and 1848, but it burned to the ground in 1966. The structure standing today is the reconstructed building, but it houses many items saved from the fire, such as several icons and a 25-pound gospel, bound entirely in silver.

Sitka’s not the only option, though. North of Anchorage, you can drive to the Eklutna Heritage Site, which has ties to Russian history. Dating back to 1650, this park is the area's oldest continuously inhabited Athabaskan Indian settlement. Russian Orthodox missionaries had come here in the early 1800s, and you can still see St. Nicholas Church, the oldest standing building in greater Anchorage. Take some pictures of the colorful Spirit Houses built over the graves of the deceased—a custom that came from the melding of the cultures.

Smooth bone. Intricate weavings. The super-fine wool of a creature that dates back to prehistoric times. Shopping for authentic Native Alaska arts and crafts is a wonderful way to literally touch the local culture. After all, many of them are made from the materials of subsistence hunting and gathering: grass woven baskets, ivory and bone carvings, or gloves made from animal hides and trimmed with the softest furs.

Throughout Anchorage and most other larger towns, you’ll find shops offering goods from local native groups, and other Alaskan made products. One of the most fascinating craft shops is in downtown Anchorage: Oomingmak Co-Op, which features products made of qiviut, the soft underwool of a Musk Ox. Oomingmak is more than a gift shop; it’s a knitting cooperative that allows Native Alaskan women to knit goods for income that supplements their subsistence lifestyles. 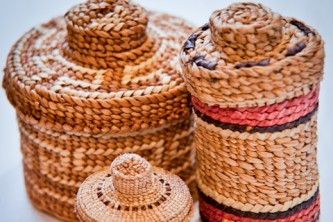 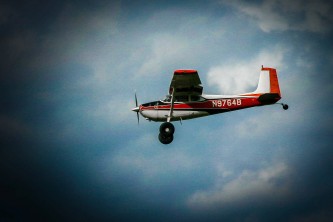 Fly To An Alaska Native Village In The Alaska Bush