This brightly colored hummingbird has the longest known avian migration proportional to its body size, and puts over 1500 km between its wintering and breeding grounds. Having the northernmost range of any hummingbird, this species is faced with a short breeding season, but Alaskan populations experience the longest day-length of any hummingbird. Like many species of pollinators, Rufous Hummingbirds have experienced long-term declines across their range though the reasons for these declines are not well understood. Identification: Nearly identical to Allen's Hummingbird. Male is mostly rufous with a white breast, black tips on the tail feathers, and a bright orange-red throat patch (known as a "gorget"). In rare cases, adult males have varying degrees of green on their backs that can be confused with the orange-backed forms of the Allen's. A metallic whine is emitted from the male's wings when in flight. Adult females and juveniles have a green iridescent back, less red on their underparts than males, and a white throat, with or without red or green spots or streaks. Rufous can be seen at the base of the tail in adult females. Females will rarely have a red central throat patch similar to the gorget of adult males. A notch on the tip of the second tail feather is a nearly diagnostic mark for Rufous Hummingbirds. Range also helps identify Rufous Hummingbird as they occur farther north and east than the Allen's Hummingbird. Rufous Hummingbird is among the hummingbirds that can be identified by the aerial display of males in courtship. The Rufous Hummingbird makes a series of steep, J-shaped dives that end at the same point, but begin at points progressing around a circle. The descents are rapid and the upward movements that connect the bottom of the J to the starting points around the circle are slow. During descent, the male emits a stuttering dit-dit-dit-deeer sound, similar but of lower pitch than the Allen's. 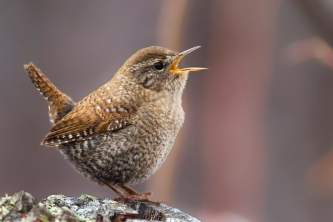 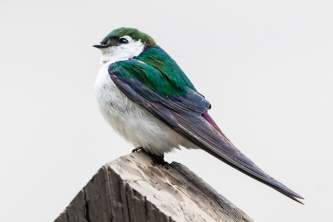 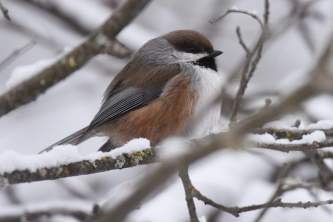 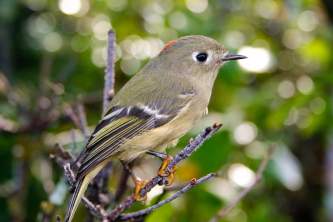