Ketchikan is truly the totem capital of the world, and if you want to see the most standing totems in one location, a visit to Saxman Village’s Totem Park is in order. The 25 totems here are authentic replicas of original poles that were left in abandoned villages as Native Alaskans moved into more populated cities.

The art of totem pole carving was a luxury that experienced its heyday in the mid-1700s to the late 1800s. The fur trade had provided the Tlingit, Haida and Tsimshian peoples a newfound sense of wealth – and time to focus on the artistry of the totem. These poles were symbols of cultural and economic wealth that told glorious, comprehensive stories about the people and legends of the land. (There was so much symbolism and information represented on each pole, it was like the Google of that era!)

In the late 1800s, Tlingits from the old villages of Cape Fox and Tongass searched out the Saxman site as a place where they could build a school and a church. The site (just one square mile) was incorporated in 1929 and has a population of just over 400 today, mostly Native Alaskans.

Thousands of people visit Saxman each year to take in the phenomena of the totem - the artistic craftsmanship – and the hair-raising sense of being in the presence of something historic and meaningful.

You can tour the open-air park on your own for a $5 fee, or take an organized guided tour and learn more about each pole’s story. When you get there, check out the gift shop, which usually offers tickets for Native dancing exhibitions and entrance to the on-site clan house for an additional fee. Finally, be sure to peek in on the Native carvers in the carving shed, who work on commissioned totem projects using traditional tools and techniques.

A free downtown shuttle or city bus will get you to Saxman, which is about two miles south of Ketchikan. Or you can enjoy a well-protected walk along the waterfront while watching fishing boats and float planes coming and going.

Open year-round, no tours in winter. 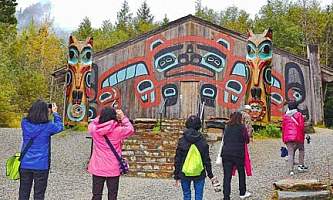