The lodge was a picturesque, two story 13,208 square foot wood frame building. The original smaller lodge (the Little Su Roadhouse) was built in 1942 to serve the traffic traveling to the Independence Mine and between Palmer and Willow and later expanded in 1983 to include 14 guest rooms, a dining and meeting rooms, and a day lodge. The Motherlode Lodge burned down in April, 2015. 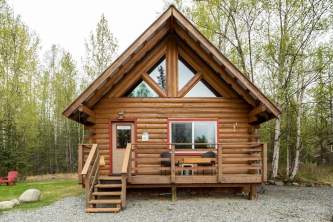