Even people who have visited all kinds of bars, all over the world, tend to say they’ve never been to a watering hole quite like this iconic Anchorage bar.Or, to be more accurate, bars. This rather rambling compound in the funky Spenard area actually includes 10 bars—with enough distinctive vibes, atmospheres and offerings to suit pretty much any taste or mood.

Mike Gordon and his partner opened Chilkoot Charlie’s on January 1, 1970, to create a bar with only-in-Alaska atmosphere. The establishment took on the mascot of Chilkoot Charlie, based on a character created by a local radio personality, and over the years became known for its eclectic, free-wheeling vibe, with costumed bartenders and an increasing stream of national acts, from Lynyrd Skynyrd and Crosby, Stills & Nash to Metallica and Green Day. Along the way, success with both locals and travelers made it overflow in a sense, and the bar gradually annexed various neighboring properties; all tallied up, the bars now house a total of 996 seats.

Granted, some of those seats are customized tree stumps—which you’ll find at the original bar area, South Long, which also has sawdust on the floor and a steady supply of cheap beer pitchers. Then there’s the jukebox-equipped Birdhouse, eclectically decorated with pickles and poultry and known to be the craziest bar in the lineup.

While some bars are open only on certain nights (and some don't open until 9 pm or later), you can’t go wrong here on any night of the week, when there is always live music, and often comedy, open mic or karaoke. And it’s always fun—and almost mind-bending—just to wander the different bars and see which one feels like the place for you, to sit down and tuck into a pitcher of beer, or a classic cocktail and soak up the festive scene.

The Cheat Sheet of the Bars

The oldest of Koot’s bars, and the bar top is a scrapbook of pictures from parties here over the years. It also has the timeless appeal of $2 beers until 9pm.

Rustic ambiance, with more padded tree stumps and original beer kegs, as well as live music every night. On Wednesdays, enjoy a steak dinner for just $10 between 4pm and 10pm!

Across from North Long, it has pool tables and good views of the nearby live music. Open only Thursday- Saturday nights.

Located by the main entrance, this bar is decorated with memorabilia from the fall of the Berlin Wall and the Soviet Space Program.

On the rocks, indeed: The showstopper here is the bar top constructed from 25 feet of solid ice. Open Wednesdays through Sundays only.

It’s open late nights only on Friday and Saturday, but has the enticements of a fireplace and a pool table. This will soon become an Oyster Bar.

Named after a late, great bar from Bird Creek that burned down years ago, this re-creation of that bar is decorated with the eclectic theme of “Pickles, Poultry, Panties and Ptarmigan.” It’s open every day, and has the rep as being the craziest bar in the place.

Vodka, anyone? Filled with memorabilia and gorgeous atmosphere back, this small bar lets you step back into the time of Czarist Russia. Open late Fridays and Saturdays only.

With a DJ, dance floor, cigars and custom-made martinis, this 1940s-themed bar has the most upscale vibe. Open Thursdays through Saturdays only.

This outdoor space has patio furniture, an old boat, and drinks are served out of an old ice cream truck. Given its exposed locale, the spot is typically only open Thursday through Saturday nights in the summertime. 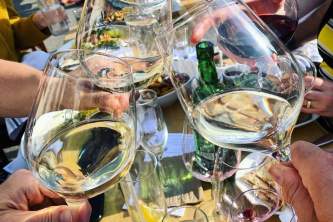 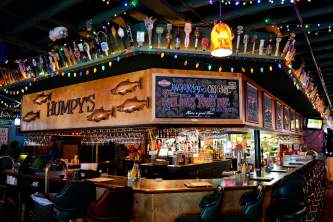 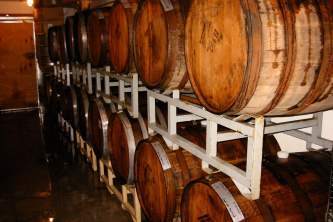