Potter Marsh may be the most accessible wildlife viewing spot in Alaska. This 564-acre fresh water marsh stretches for nearly two miles between the New Seward Highway and the base of the Chugach Mountains, creating a wetland maze that concentrates at least 130 species of migratory and nesting birds very close to highway pullouts and 1,550 feet of handsome, family friendly boardwalks. This rich habitat also attracts browsing moose, beavers and muskrats, bald eagles, and spawning salmon.

After summer green-up especially, the venue offers families and photographers unparalleled up-close viewing of trumpeter swans and Arctic terns, plus many species of ducks and geese. Throw in schools of salmon swirling in the deeper pools beneath the boardwalk, and you’ve got the ideal outing to spy critters doing their thing. It’s 100-proof concentrated wild Alaska only a few miles from the urban core and suburban Anchorage.

Hundreds of migrating birds converge on the marsh after beak-up in April and May. Ducks, geese and swans usher their fuzzy offspring through the network or pools and channels in June and July. Fall migrants stop for last meals, and pairs of mated black-billed swans draw dozens of photographers as summer draws to a close. Moose browse in the woodsy fringes toward the mountains, and beavers work pools near the brush. Both black and brown bears pass through the marsh, though are rarely seen. Bald eagles soar in search of prey, and sometimes get harassed by terns and gulls. Three species of salmon enter Rabbit Creek beneath the boardwalk, and can be seen schooling in deeper pools by mid-summer, often attended by large Dolly Varden char hoping to snatch a mouthful of salmon eggs.

Watch for these notable species:

Why are there so many animals?

Potter Marsh concentrates so much wildlife because it features a succession of different habitats in a relatively small area. At least three flowing streams feed a network of shallow ponds shrouded by sedges and grass. The wet hummocky land rises into bog and black spruce, and then transitions into alder. A mature forest of cottonwoods, birch and spruce rises along the perimeter. Taken as a whole, the marsh is basically a smorgasbord of overlapping edge habitats of the sort that draw wild animals into the open. It’s what scientists call ecotones.

The Potter Marsh area used to be open to Turnagain Arm’s fierce tides. Dena’ina Natives called it Hkaditali, or “drift lumber,” because of density of the debris that would strand on tide after tide. (It was a great place to find lumber and firewood.) The construction of an embankment for the Alaska Railroad in 1917 restricted the flow of Rabbit Creek and impounded water from other sources, creating the marsh. It is now part of the much larger Anchorage Coastal Wildlife Refuge that stretches along the western and southern boundaries of the Anchorage peninsula, running 16 miles from the marsh all the way to Point Woronzof.

Bring binoculars or scopes for best viewing. Moose are most active early in the day or late in the evening. Spring and fall concentrate migratory birds, while high summer features breeding pairs and their broods. Dogs are prohibited during the summer season, and the waters are closed to fishing. Bring wind shells and extra layers in case Turnagain Arm’s brisk wind begins to blow. Don’t stop along the highway shoulder, even if you see a fabulous swan paddling just out the window. Seward Highway traffic moves notoriously fast.

Take the Seward Highway south past the Rabbit Creek Road exit and descend toward the panoramic view of Turnagain Arm. Turn east (toward the mountains) at the Potter Marsh exit and follow the road to a parking area with restrooms and walking access to two different boardwalks. Two small pullouts are situated along the marsh about 1.5 miles south from the first exit. A large parking area is located at the southern end of the marsh off Potter Valley Road by the mailboxes. 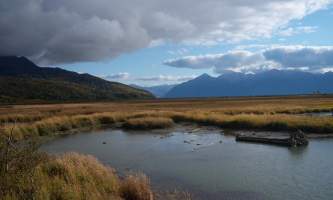 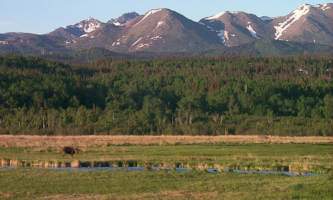 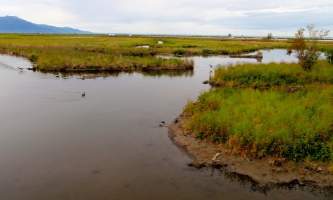 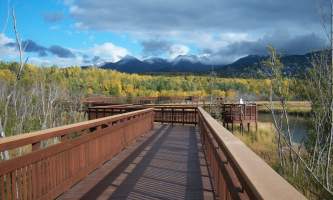 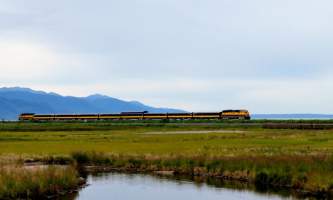 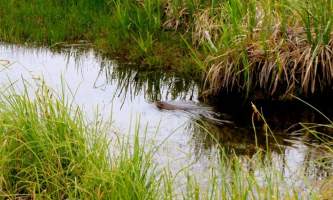 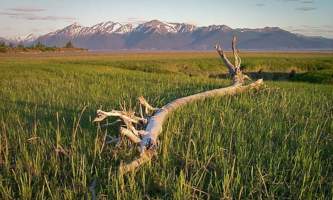