The Alaska Railroad stretches 470 miles from Seward in the south to Fairbanks in the north. The train operates two main daily routes in the summer: a southern route between Seward and Anchorage and a northern route between Anchorage, Talkeetna, Denali, and Fairbanks. On many trains, you have a choice of two classes: the railroad's basic Adventure class, and the more upscale GoldStar Class, which offers full-service dining and intricate décor.

No Alaska Railroad staff or services at this location. The historic depot in Wasilla is where the train stops to pick up passengers, however it is not staffed by the Alaska Railroad. The building is leased to the Wasilla Chamber of Commerce, and is often closed and locked at train arrival/departure times. 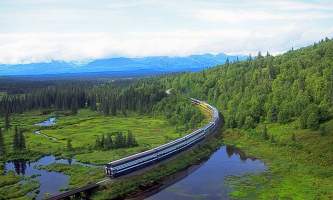