Seven miles off the coast, Sledge Island is visible on clear days from this section of Teller Road. Originally named Ayak, the island was home to about 50 Ayakmiut, who primarily hunted seals but also walrus when those animals migrated close to shore. The British explorer Captain James Cook landed on the island in 1778 and gave it an English name after a Native-made sled—or sledge—that he found there. The island’s steep cliffs provide ledges, crevices, and burrows for nesting kittiwakes, murres, and puffins often seen along Nome’s coast. 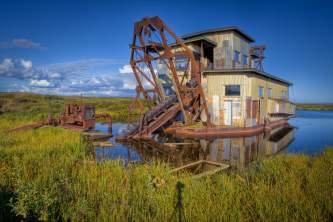