The Sheenjek River begins in a near arctic environment and travels hundreds of miles into the subarctic, flowing a southerly route out of the Romanzof Mountains, within Alaska's Brooks Range. It carries a National Wild and Scenic River distinction and offers several options for extended trips into a vast wilderness. The greatest distance one can travel is about 290 miles from its headwaters to the town of Fort Yukon along the Yukon River and takes up to 18 days. This upper section is suitable for canoes and kayaks only. A more common trip is from one of the mid-river lakes where a floatplane can take you in to start anywhere from a 120 mile to a 268 mile trip. Most of the river's length lies within the Arctic National Wildlife Refuge or the Yukon Flats National Wildlife Refuge and represents one of the areas the Porcupine Caribou Herd uses as a winter range. The late Dr Olaus Murie and his wife Mardy Murie chronicled its history, when they began the first census of the state's caribou population and wrote a lovely account of their time here in the book titled, Two In The Far North.

From Fairbanks you can get to the river by flying a commercial flight to either Fort Yukon or Arctic Village, where a charter flight must be arranged to take you in to the river put in. From Fort Yukon the flight in is slightly longer than from Arctic Village and from both the flight is quite scenic as you fly up the valley into the Brooks Range. From either of these two starting points you can go all the way to the river's headwaters in a wheel equipped bush plane. The landing strip here is a gravel outwash plain and is a full quarter of a mile from the river. It is also worth noting that this area is suitable for small boats only and is often blocked by aufeis till well into July, so an early summer trip here is not well advised. This is a site best suited for starting an august trip.
A more common starting place, and one that sees inflatable rafts, is from one of two lakes located 20 and 40 miles down from the headwater strip. Last Lake is the furthest upriver and Lobo Lake is the next and both require a plane on floats to get you in. Both are situated not far from the river and offer great hiking opportunities in their vicinity.

Take out options are several. The frugal will likely forego a floatplane pickup and will go all the way to the Yukon River and up it a ways to the town of Fort Yukon where commercial flights are scheduled in and out. This takes a committed group as the last hundred miles are a meander through the Porcupine and Yukon Flats. The Sheenjek will take you to the Porcupine River and then down to near the Yukon River, where you can go up the Sucker River to a point near town. Otherwise, you can arrange to be picked up by wheel plane from a gravel strip at the confluence with the Koness River, 108 miles below Last Lake. By going past the Koness River you are resigned to having a floatplane pick you up at a point in the lower reaches of the Sheenjek or at the confluence with the Porcupine River. This needs to be prearranged with your charter flight operator.

The river, at this point, is a small river with many shallow riffles and boulders to dodge. In the early season it is an non-traversable section as the aufeis from the past winter completely fills the channels and makes it impossible to move downstream. If you don't know what aufeis is or have not experienced it before, take our word for the dangers and obstacles it represents. For late summer trips there might be enough water for casually floating. There still is lots of lining boats through shallows and a drag or two. In the region of Double Mountain, the river valley is wide, with a few pockets of northward migrating white spruces. For the 20 miles down to Last Lake, the river is mostly a single channel of Class II rapids passing through an area of lakes and muskeg country with a lively rapid above Last Lake.

From Last Lake, a common put in spot, the 18 miles to where Lobo Lake's outflow merges is an easy Class I section but past the Lobo Lake area, another spot of current and boulders make for a few Class II areas. The river is wide and flat tailing here with numerous islands creating alternate choices on which way to go. It is a more forested region and sweepers actually can become an issue where cut banks and spruce trees are toppling into the river. Five to seven days is a good time for this stretch

Below the Koness River the Sheenjek becomes more lethargic as the current and gradient become less. This is the entry into the Yukon Flats, a giant width of landscape that is ancient riverbeds, sloughs dried up, lakes draining and moving water channels shifting for hundreds of miles across the Yukon Valley. There is good fishing all along here as the river deepens and widens and a healthy salmon run means it is a favorite bear area to be prepared for. If you have everything prearranged, it is along the lower reach of the river, or at the confluence with the Porcupine River, that floatplanes can pick up parties that don't have time to go further.

The lower Porcupine is the center heartland of the Gwich'in Athapaskan people and signs of the local natives are plenty. Riverboats will be up and down a lot if it is hunting season. The poplar and spruce muskegs are endless in any direction and the best way to travel is by boat and not foot. The take out at Fort Yukon deserves special mention. Just past Homebrew Island on river left will be the mouth of the Sucker River. You are only a few miles from the mighty Yukon River and by paddling three miles up the Sucker River you can reach a point alongside a road not far from the airstrip. Locals with four-wheelers can be hired, sometimes, when necessary.

During hunting season be prepared for an inordinate amount of air traffic as hunters are being flown all over the Brooks range in pursuit of moose, bear, caribou, and sheep.

The early season, (June to mid July) has too much ice blocking the river channel for safe navigating of the upper stretch and most of time the water level is low and dragging is necessary. 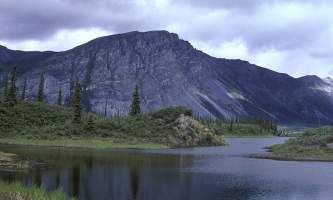 Take Out Option for Sheen­jek River

The fru­gal will like­ly forego a float­plane pick­up and will go all the way to the Yukon Riv­er and up it a ways to the town of Fort Yukon where com­mer­cial flights are sched­uled in and out. This takes a com­mit­ted group as the last hun­dred miles are a mean­der through the Por­cu­pine and Yukon Flats. The Sheen­jek will take you to the Por­cu­pine Riv­er and then down to near the Yukon Riv­er, where you can go up the Suck­er Riv­er to a point near town.

Take Out Option for Por­cu­pine River

Take out here and catch a reg­u­lar com­mer­cial air­line flight to Fairbanks.

From Fair­banks you can get to the riv­er by fly­ing a com­mer­cial flight to either Fort Yukon or Arc­tic Vil­lage, where a char­ter flight must be arranged to take you in to the riv­er put in. From Fort Yukon the flight in is slight­ly longer than from Arc­tic Vil­lage and from both the flight is quite scenic as you fly up the val­ley into the Brooks Range. From either of these two start­ing points you can go all the way to the river’s head­wa­ters in a…  ...more

This put in requires a plane on floats to get you in. It is sit­u­at­ed not far from the riv­er and offer great hik­ing oppor­tu­ni­ties in their vicinity.

Take Out Option for Sheen­jek River