This 500-foot cascade plunges into a cove surrounded by immense cliffs along the northwest wall of the inner fiord for Blackstone Glacier in Prince William Sound. Only about a mile from the active face of the glacier, and about a mile inside the fiord, the waterfall is one of the most photographed in the region, easily viewable during marine tours. Independent or guided kayakers will slip into the entrance of the cove to immerse themselves in the roar and splatter of falling water and experience the immensity of the terrain. It’s only one of many cascades at the head of Blackstone Bay.

You’ll need a boat. Most people take a marine tour from Whittier into Blackstone Bay or make arrangements for a guided or independent kayaking excursion. Entering the entrance of the cove and gazing up at the cascade—with a glimpse of hanging Northland Glacier perched at cliff top—can be an extraordinary peak moment.

Caution: Under no circumstances try to approach the shower of falling water. Stay back several hundred yards at all times. Hunks of Northland Glacier have been known to plunge into the ocean without warning. A kayaker was killed here several decades ago while trying to fill a water bottle at the base of the falls.

Whittier is about 60 miles from Anchorage on the other side of a three-mile tunnel from Portage Valley at the head of Turnagain Arm. Take the Seward Highway about 50 miles to Portage Glacier Highway, then continue east about six miles to the staging area for the Anton Anderson Memorial Tunnel. The Whittier Harbor is about 1.5 miles further after you emerge. 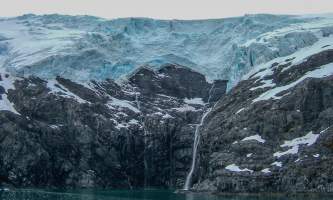