The city of Nome grew up around its golden beaches, with shops for goods and services established close to the mining action. Over the years, storms and fires decimated city buildings over and over. In 1945, storm waves hurled blocks of ice into the city. In 1946, another storm destroyed six buildings. Community members had enough, and began lobbying to move the city further inland, to where the airport is now. Deposits of gravel tailings had created a firm base, and a military hangar and buildings already existed there.

Some business owners did not want the city to move, though, and instead advocated for a protective sea wall to be built along the beach. They were successful in acquiring federal funding and the sea wall was built between 1949 and 1951 at a cost of $1 million. Huge rocks were brought from Cape Nome, 13 miles east, with reports from the time noting that it took one truck to carry each rock. Beach erosion and further storm damage throughout the years make regular seawall maintenance necessary. Extensive repair is costly and logistically challenging (as the beach erodes further, access is more limited). New armor rocks weigh 8-10 tons each, costing more than $600 apiece

You can view the seawall anywhere along Nome’s coastline. 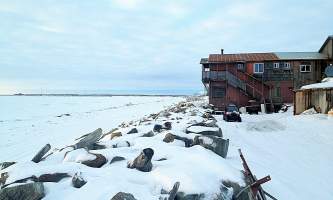