Centuries before Gore-Tex was invented, Unangax hunters stayed dry by wearing waterproof parkas made from marine mammal intestines. In the 19th century, Russian naval officers commissioned gut capes like this one, patterned after their naval uniforms. A skillful Unangax seamstress would need six months or more to sew such a cape. 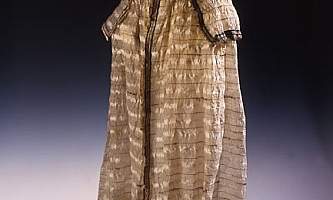