Don’t expect to run very much of this world-famous race route, which begins 2.5 hours south of Anchorage and climbs nearly 3,000 feet from downtown Seward. Though the first part of the route is very runnable, the next 1.5 miles climb Mount Marathon and are too steep and rocky for most to run. Just the hike itself makes for a very intensive workout.

Every Fourth of July, the world-famous Mount Marathon race fills the seaside town of Seward with the atmosphere of a carnival—at least for the onlookers. For the racers, negotiating the 6-mile course (including 1.5 miles up and down Mount Marathon’s steep face) often proves a grim experience. Many racers reach the finish line with bruises, scratches, and gashes. Not many years ago one racer even went missing in the fog that covered the upper part of the mountain.

The part of the route that climbs Mount Marathon begins at the uppermost end of Lowell Canyon Road on the north side of town. A short way up, the route reaches what racers call “the slot”—a section of very steep trail that climbs along an almost sheer-sided creek. Here you’ll need your hands to clamber up some dangerous ledges. (If you find this bit of trail too intimidating, you can find a far easier route through the woods to the left of the creek.)

The trail still climbs steeply through the trees above. Once above tree line, where the trail turns into a rocky and scree-filled slot, you’ll have to use your hands again (though more for balance than climbing).

Here, as the trail slants steeply up and across the open face of the mountain, take a moment to gaze down on the town of Seward and the waters of Resurrection Bay spread out below.

For those climbing this trail for the first time, a little surprise waits at the top of the slope. There, just a few feet from the top of the race route, the rocky trail suddenly mounts the edge of a near-level grassy meadow. Upon getting to your feet after climbing out of the rocks, you should now finally see (some 10 yards up the meadow) the famous 5-foot-wide boulder marking Race Point (2,950 feet).

As you reach out to touch the boulder, keep in mind that this is not the summit of Mount Marathon (which rises well above and behind Race Point). On a clear day you can look straight across a glacial cirque to its precipitous south face. Just by looking at it you will probably, and quite reasonably, discount any thoughts about climbing it. It makes for that impressive a sight.

On the other hand, you might find the trail leading up the ridge behind race Point worth exploring. Though it doesn’t go far before petering out in some very rugged and treacherous terrain, it does offer some dramatic views into the deep valleys to the left and right of Race Point.

But perhaps you have no desire to go any farther than the racers do. Either way, when it’s time to descend, you may not relish going down the way you came up. The racers don’t go down the same way, either. Instead, after circling around the Race Point boulder, they start down the northeast ridge of the mountain, to where the route drops off the ridge and back onto the mountain’s face. There, a steep, loose-gravel trail allows racers to literally bound down the mountain.

If you don’t want to cross the face of the mountain again, continue straight past the racer’s route and follow the hiker’s route down the ridge into the valley on the left. After dropping into that valley, you’ll cross the base of the mountain back toward Lowell Canyon Road where you began.

Thus you can complete, with some variation, the most exciting part of the Mount Marathon Race Route and, in the same workout, take a tour of some of the other trails that crisscross and climb Mount Marathon.

(For more, see Walk-About Guide to Alaska, Volume One by Shawn R. Lyons) 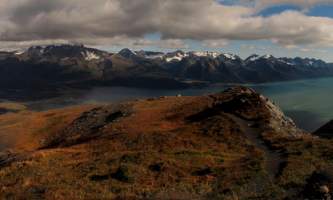 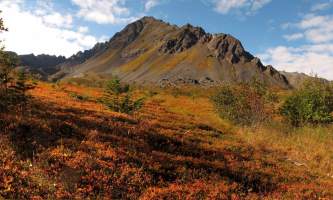 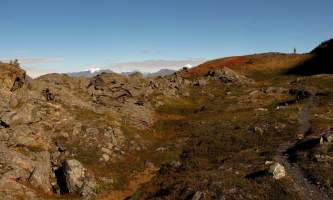 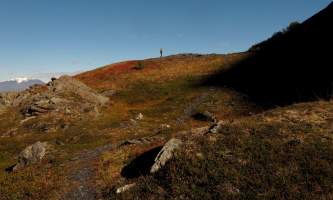 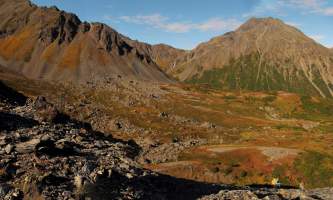 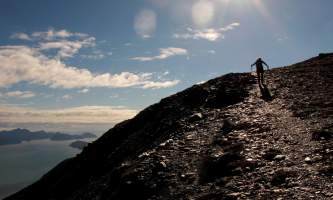 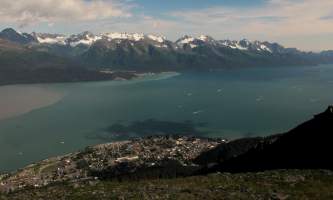 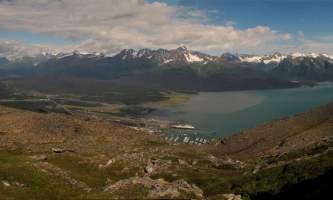 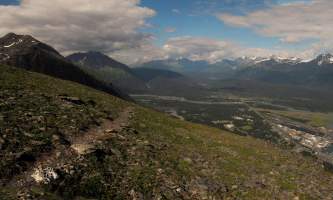 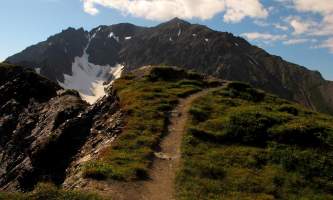