Construction of this early-1900s bridge cost a whopping (at the time) $1.4 million, which earned it the nickname Million Dollar Bridge. But the bridge quickly earned its keep, allowing the railroad to haul copper from Kennicott to the port of Cordova. At 1550 feet, it was the longest steel bridge on the 196-mile Copper River and Northwestern Railway. Its railroad days ended in 1938, and it was converted to a road bridge in the 1950's. The bridge collapsed during the 1964 earthquake but has remained intact and was added to the National Register of Historic Places in 2000.

The bridge was re-opened to highway traffic in 2005. However, the Copper River Highway is currently closed beyond mile 36, where there is a failed bridge. As of this time, the road does not go beyond that point. Here's a list of outfitters who can help you reach Million Dollar Bridge and Childs Glacier. 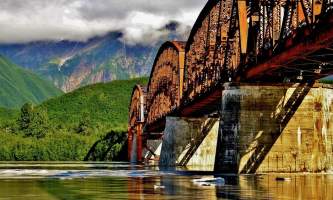