Grand Central Valley reaches deep into the Kigluaik Mountains. Heading north, the base of Mt. Osborn (at 4,714 feet, it’s the Seward Peninsula’s tallest peak) is visible far up the  valley to the left. These mountains have classic  U-shaped valleys carved by glaciers, but the ice  has long since melted  leaving only small lakes  at the head waters of the  side drainages. Sockeye  salmon migrate up  Pilgrim River to Salmon  Lake between late July and mid-August, and  some continue up the  Grand Central River as  far as the bridge. Spawn ing occurs earlier at the  bridge than Salmon Lake because the eggs develop more slowly in the cooler river temperatures than in the slightly warmer lake. Grizzlies are fairly common around Grand Central  and Salmon Lake valleys, especially in the late summer when spawned-out salmon and ripe berries are abundant. Harlequin duck and red-breasted merganser may be seen paddling in the fast waters, sometimes in the same place where the American dipper plunges into the water and walks on the river bottom searching for insect larvae. Bluethroat, yellow warbler, Wilson’s warbler, and Arctic warbler are relatively common species among the willows near the river and in small drainages along the road near the bridge. Arctic char entered the glacial lakes before the lakes long ago became landlocked and isolated from each other. Recent genetic testing shows that each lake’s char has evolved into a distinct subspecies.

The rugged mountains close to the Grand Central River seem like natural habitat for Dall sheep, but you won’t find them there. Biologists speculate that vegetation is too sparse on the rugged upper slopes and high alpine meadows where sheep prefer to feed in relative safety from predators. Recent finds of old sheep skulls, however, have ignited debate on whether wild sheep once populated the area. 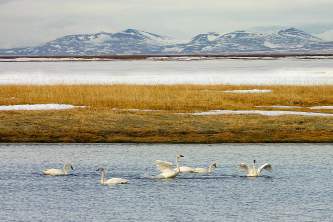