Nestled in a steep-walled couloir above Independence Mine Valley, Gold Cord Lake makes for a fine family outing. The destination is a lake that’s peculiarly situated—walled in on a shelf, high above the valley floor. Why the lake has never worn or seeped through the narrow earth wall holding it in remains a bit of a mystery, but it hasn’t. Consequently, after a 90-minute drive from Anchorage and a 1-mile hike up a well-trodden trail, the lake remains hidden until you stand upon its western shore.

Beginning on Gold Cord Mine Road just below Independence Mine, Gold Cord Lake Trail first crosses a shallow stream and then climbs gradually across the center of the Fishhook Creek Valley. After passing numerous remnants from the old mining days—pipes, cables, cabins, etc.—the trail reaches the base of a large boulder pile. It looks like a great dam holding back a flood of water, and indeed, that’s exactly what it does.

From the base of this wall, the trail starts up a series of broad switchbacks winding up the wall’s face. Look down into Independence Mine, as well as the many notches and cirques hanging off the ridges and mountains that circle the main valley.

After over 0.25 miles of climbing, the trail suddenly levels off as it sidles up alongside a tumbling stream that drops from the shelf above. After another 100 feet or so, you’ll reach the western shore of the stream’s source—Gold Cord Lake.

But you probably won’t be alone. On any sunny Sunday afternoon you might come upon people resting along its grassy shores and children hopping among the rocks in the shallows. The lake’s seclusion from the busy valley below may ironically account for its popularity.

If you arrive before mid-June, the lake may be half-covered in ice. You may also see traces of avalanches that, not long ago, tumbled off the sheer slopes of Micro-Dot, the high column of granite up and to the right. Of course, at 4,500 feet above sea level, finding snow and ice in June might not seem so strange, especially in Alaska.

If you feel ambitious, climb the slope on the near right up to the broad plateau below Micro-Dot’s west face and enjoy an even more expansive view of the entire Fishhook Valley. To the south, the valley empties into the Palmer-Wasilla lowlands. To the west, it climbs over Hatcher Pass and then extends north to The Pinnacle. Then relax by the lake while the kids play among the rocks, or wade into the cold, calm water.

As you approach the Independence Mine Parking Lot, the trail can be seen to the far right end. 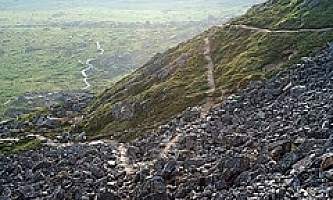 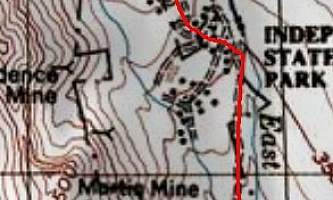