Fish Wheels in the Copper River

Powered by the river current, this water-wheel-like innovation that spread across the Far North during the Gold Rush scoops migrating salmon from the water and deposits them into a bin for processing. It’s one of several ways that Alaskans harvest salmon from the Copper River near Chitina.

More than one million Pacific salmon travel up the Copper River each year to reach their spawning grounds. King salmon arrive earliest in late spring, peaking in June, with most reaching natal rivers by mid-summer. (These are the monsters!) In early June, sockeye salmon, also known as “reds,” basically take over the show, filling the river through August. A smaller run of coho or silver salmon begin arriving in late July, then peak in August and September.

How do you fish in a river full of glacial silt?

The easiest way is to use the iconic fish wheel—long associated with Alaska Native subsistence throughout the Bush. Under current state regulations, any Alaska resident can get a permit to deploy and then operate a fish wheel in the Copper upstream from the Copper River Bridge. Every year, residents harvest 60,000 to 80,000 fish in a district that stretches more than 120 river miles upstream, often from private or Native-owned land. The current keeps the baskets turning, with salmon swimming into the net before being dropped into a collection pen located on the upriver side of the fish wheel.

In public areas, you may be able to see salmon fall into the baskets, although it may require a fisherman's patience. Salmon tend to come through in waves, with an hour of nothing in the basket being followed by an hour with dozens caught in minutes. Because permit holders don’t have to be present all the time, you may or may not get to see people processing salmon or pulling them from the baskets. Please be respectful of people's space and don't offer to buy salmon as it's against the law and tradition.

A more popular (if not more rugged) method of catching Copper River salmon uses a dipnet. You may see people fishing below the bridge over the Copper River near Chitina, wielding a long pole with a wide round or square net in the water. It’s typical for residents to harvest up to 150,000 salmon over the summer, each dipper taking home somewhere between 25 to 55 fish or more to feed their families. (The allowed catch depends upon the number of dependents in a household.) This dipnet fishery—often targeted by Anchorage and Fairbanks residents—extends from the Copper River Bridge downriver to O’Brien Creek through the narrow Wood Canyon to Haley Creek.

Chitina is located at the end of the Edgerton Highway on the west bank of the Copper River near the confluence with the Chitina River, just across from the western highway entrance to Wrangell-St. Elias National Park. Set aside about five hours if driving from Anchorage. Go northeast on the Glenn Highway about 180 miles to Glennallen, then south on the Richardson Highway about 32 miles to the junction with the Edgerton Highway. (About 82 miles north of Valdez.) The village is about 33 miles further, at the junction with the McCarthy Road into the park and the O’Brien Creek Road leading south toward Wood Canyon of the Copper River. 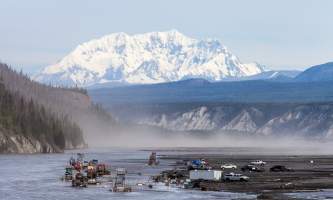