The Chitina River flows down a huge valley that traces a path separating the Wrangell Mountains and the St Elias Mountains of Alaska's southeastern mountain region. This river trip can be done in 4 to 8 days depending on where you start your trip. This valley sits astride a giant fault line that runs through a region that has formed as colliding tectonic plates have pushed up some of the highest mountains in North America with Mt Logan (19,500 feet) among the giants. The entire eastern side of these mountains is drained by the Logan and Chitina Glaciers and forms the source of the Chitina River. It is a region rich in history as miners have searched through the mineral rich area and local native populations have hunted the abundant fish and wildlife for centuries. It is a river of moderate difficulty but lies in a remote wilderness that requires a special set of skills and commitments when traveling through. Peaks rise to 16,000 feet all around where the river eventual joins the mighty Copper River and most of the reason the Copper is so mighty is because of the influences of the Chitina River. There is a 112 mile or a 60 mile stretch of river for interested parties to do and can take as long as 7 to 10 days to complete and is best done in rafts.

Most of the put ins require flying by bush plane from McCarthy to a remote strip.
For the more adventurous parties there is a tundra landing strip at a place called Hubert's Landing and it is the furthest up the valley you can get. It is not far from the terminus of the Chitina Glacier and there are some great hikes to do in this region. You will need 7 to 8 days to fully enjoy this trip. One disadvantage to this starting point is that the strip is a long ways from the river and a portage of up to 2 miles is needed to get all the gear next to the river. Maybe the river channel near the strip will have water but lately it has been the far channel. Pilots will be able to advise about this. But with a few extra days spent here some good exercise can be had as you carry gear to the launch site. Another small disadvantage is the need to negotiate the numerous, wide shallow braids all filled with fine glacial silt and a daily wind that blows the silt into clouds of fine dust that settles into everything. But the rewards of this rarely traveled stretch of wilderness will, likely, outweigh all the dust and carrying. From here it is 112 miles to the confluence with the Copper River.
A more commonly used strip is at Jake's Bar located just below the confluence with the Tana River on the right side of the river valley at GPS N 61 degrees and 0 minutes by W 142 degrees and 46 minutes. From here the river is much less inclement with not as much blowing silt and easier braids to read as you float along. It is about 60 miles to the confluence with the Copper River and could be done in as little as 3 days.
There is another put in possible that does not require flying and is done by driving the McCarthy road to the end, where it meets the Kennicott River. Here you could rig your rafts and travel the very swift, rocky and splashy section of the Kennicott the five miles to where it then joins the Nizina River. Here the river will take on considerably more water and for the next 10 miles is swift, wide and very braided with beautiful scenic views in all directions. At this point the Nizina enters the Nizina Canyon, a sheer walled limestone canyon with blind turns but no real obstructions. However, the water is very pushy and it is wise to stay to the inside of all the blind turns and away from the walls where big hydraulics occur. It is possible to find a camp in here but the whole stretch from the road put in to the Chitina is easily done in a day. At the mouth of the Nizina are a cabin and cable crossing as well as a place where planes can land. It is a rather fast paced start to a Chitina River trip and dry suits should be used for the Nizina canyon, especially if it is high water. This trip could be done in 4 days.

There are a couple of take out scenarios, but the most hoped for is to reach the McCarthy Road Bridge across the Copper River. This is not always easy as the Chitina joins the Copper at a region of high bluffs 1/2 mile below the bridge. To attempt this take out one must hug the right hand shore/bluff for a mile before reaching the confluence and then be able to stop yourself to see if you can line your boats up the shoreline the half mile to the bridge. This is not always an easy situation. If it isn't a possibility you must quickly cross the Copper River to its right hand side to float down 3.5 miles to O'Brien Creek where the last road access is. Sometimes this is quite easy and the only reason it isn't is if you didn't get across the river in time or if the line of combat fishing dipnetters has every square inch of shore taken up as they try to catch red salmon by dipnet. It often means piling into an angry line of fisherman and occupying their site for the time required to get all you gear out of the way.

The drive to McCarthy from Anchorage is breathtaking and is 4 to 5 hours and the 45-minute flight from McCarthy up the Chitina Valley is a gem. With the high peaks of the Wrangell Mountains on your left and the giant peaks, including Mt Logan, of the St Elias Mountains directly ahead of you, it is a breathtaking way to start your trip. The strip at Hubert's Landing is a bumpy tundra zone and the portage of gear 2 miles to the river is sometimes referred to as grueling, which is why most commercial outfits don't go there. That said, it means you will have the place to your self with little or no human presence noted. Once on the river you will have the cold, fast glacial river to occupy you as you try to choose the deeper channel. In the turbid, gray glacial water this is often difficult for anyone not used to a revere the color of cement. The river starts on the right side of the valley then moves to the left where the Barnard and Hawkins Glaciers merge from the river’s right side. Gibraltar Hill is a neat lookout around this huge valley. The river then moves back to the right as you approach the dramatic Mac Coll Ridge, where waterfalls plunge down the brightly colored mountainside. Beyond Mac Coll Ridge and Castle Bluffs, the wide river necks down a bit and choosing channels becomes much easier. Soon you will have the Tana River joining from the left side of the river. Be on the look out for the herd of bison that live in this area! It is only a few miles to Jake's Bar from here where the river becomes much narrower and a strong swift current rolls you along. The landing zone of Jake's Bar is on river right just as the river forms a single channel and begins a sweeping turn to the right.

If this is your starting point take a good look back upstream at the incredibly wide mountain valley. From here the river is easy to navigate even though the current is strong and getting pulled over to shore is sometimes no easy feat. The river is running NNW in a meandering fashion with a 10- to 12-mile an hour current. The river again becomes immensely wide where it turns to run due west and there are many nice camping zones along here. Where the river takes a sudden bend due north marks the area just before the clear Tebay River. There is likely to be fishing on the left where bears are always, but camping is a risky proposition. From here, it is only 20 miles to the confluence with the Copper River and your likely take out.
If you are able to take out at the McCarthy Road Bridge get over to the right side of the river. Give yourself the last mile to stop and line your boats up the Copper to the bridge. If you plan on going to O'Brien Creek get to the left side of river right away and leave plenty of space between your boats in case the pull in is congested with fishermen. 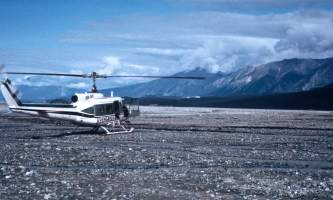 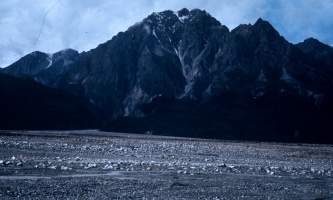 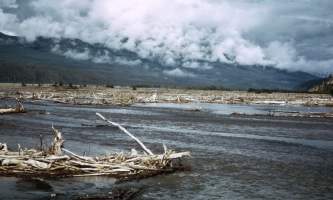 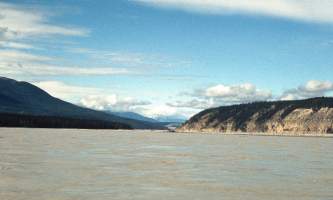 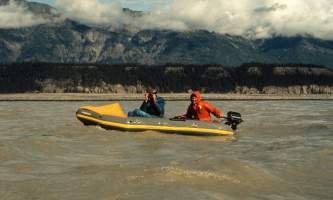 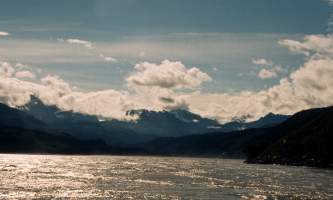 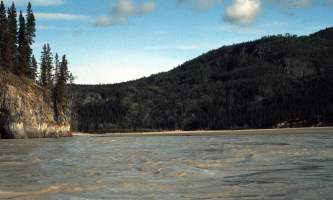 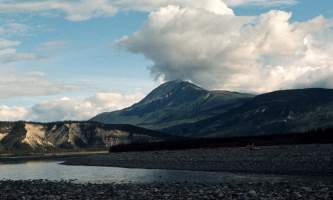 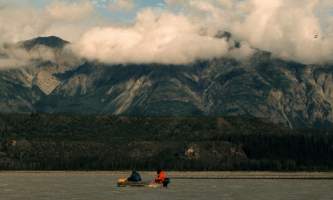 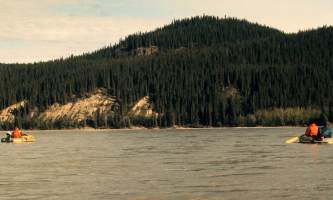 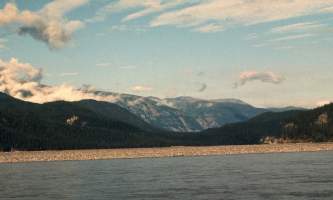 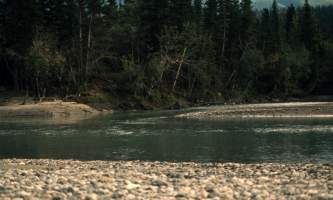 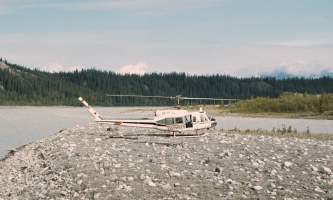 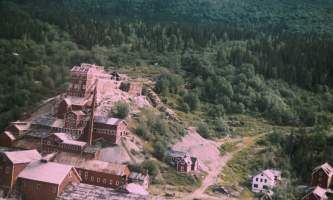 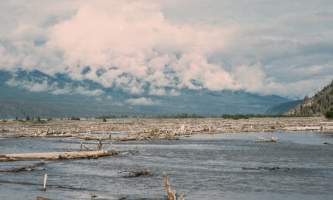 This is the fur­thest up the val­ley you can get. It is not far from the ter­mi­nus of the Chiti­na Glac­i­er and there are some great hikes to do in this region. You will need 7 to 8 days to ful­ly enjoy this trip. One dis­ad­van­tage to this start­ing point is that the strip is a long ways from the riv­er and a portage of up to 2 miles is need­ed to get all the gear next to the riv­er. Maybe the riv­er chan­nel near the strip will have water but late­ly it…  ...more

A more com­mon­ly used strip is at Jake’s Bar locat­ed just below the con­flu­ence with the Tana Riv­er on the right side of the riv­er val­ley. From here the riv­er is much less inclement with not as much blow­ing silt and eas­i­er braids to read as you float along. It is about 60 miles to the con­flu­ence with the Cop­per Riv­er and could be done in as lit­tle as 3 days. 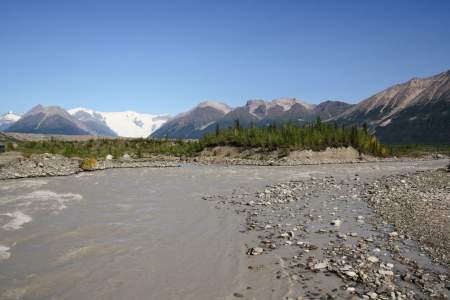 Here you could rig your rafts and trav­el the very swift, rocky and splashy sec­tion of the Ken­ni­cott the five miles to where it then joins the Niz­ina Riv­er. Here the riv­er will take on con­sid­er­ably more water and for the next 10 miles is swift, wide and very braid­ed with beau­ti­ful scenic views in all direc­tions. At this point the Niz­ina enters the Niz­ina Canyon, a sheer walled lime­stone canyon with blind turns but no real obstruc­tions. However,…  ...more

Take Out Option for Chiti­na River

To attempt this take out one must hug the right hand shore/​bluff for a mile before reach­ing the con­flu­ence and then be able to stop your­self to see if you can line your boats up the shore­line the half mile to the bridge. This is not always an easy situation.

Take Out Option for Tana River

Con­tin­ue down the Chiti­na to its con­flu­ence with the Cop­per Riv­er, where there is road access, and is a great wilder­ness trip that com­bines the thrill and adren­a­line rush of big white water and remote wilder­ness. The com­mon take out is O’Brien Creek and is described in detail for the Cop­per and Chiti­na Rivers.

Other Advice for the Chitina River

All along the upper riv­er there are many fish-choked, clear trib­u­taries where griz­zly bears are like­ly to hang out. It…

Other Advice for the Chitina River

All along the upper riv­er there are many fish-choked, clear trib­u­taries where griz­zly bears are like­ly to hang out. It is not wise to camp at these sites as tempt­ing as it is. Of course stop­ping to col­lect clear water in your water jugs, or hav­ing lunch there is a great idea. Most peo­ple fil­ter these waters to ensure there are no gia­r­dia par­a­sites to infect you. The clear set­tled pools in the mid­dle of the big riv­er bars, how­ev­er, hold water…  ...more