Just north of Nome, in the low foothills, part of the bedrock has been exposed at the top of the mountain – an unmistakable landmark for travelers arriving by sea, by air, or overland. Early miners named this Anvil Rock, since it looks like a blacksmith’s anvil from almost any angle. Many geographic features were similarly named. Anvil Mountain…Anvil Creek (where the first big payload of gold was discovered in 1898). Even the boom-town that sprang up on the beaches below was called Anvil City until late 1899, when it was officially named Nome.

While Nome has changed dramatically over the years, the bedrock tor at the top of the mountain is reassuringly solid and unchanging. A constant landmark, this shaper of names is the perfect place from which to enjoy a truly spectacular view of Nome, the Bering Sea, Cape Nome, and the Kigluaik Mountains.

The hike up from the base of the mountain only takes about an hour there and back though, and promises a good chance to see musk oxen, a variety of birds, and maybe even reindeer or red fox. Wildflowers abound in the spring, some of them quite rare.

Be sure to also visit the remains of the nearby White Alice communications site, a Cold War-era antenna system that linked remote parts of Alaska to the rest of the country.

If you’re in town on July 4th, you can join local runners in in the fee-free Anvil Mountain Run, starting at 8 a.m. from City Hall. At approximately 12.5 miles up and back, you’ll get a good sense of the landscape miners traversed over while scouting for gold in these areas. (Be back by 10 a.m. for the parade!)

By car: From Nome, take Bering Street, which turns into the Teller Road. At Mile 2.8, take a right onto Dexter Bypass Road. After about half a mile, you’ll find the Anvil Mountain Road climbing up the hillside. It will take you to the White Alice site as well as Anvil Rock. The rough, unpaved road is not maintained in winter, but is accessible once snow melts in late spring/early summer.

By foot: From Nome, take Bering Street/Teller Road, past the Dexter Bypass Road. At about mile marker 4, turn right onto Glacier Creek Road. When the road veers to the left, look for a parking spot. The easy hike goes up about 600 feet, and is around one mile round-trip. For a longer hike, find one of the numerous trails off the Teller road (behind the softball fields). For a different, and more technically challenging route, you can climb the backside of Anvil Mountain off Rock Creek Road. 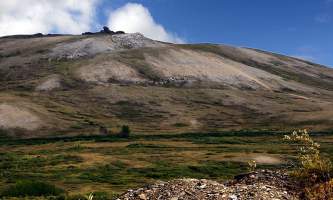 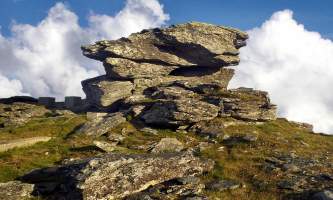