Exit Glacier Road, Through My Years

My first memory of Exit Glacier Road was not so happy. One autumn day in the 1990's, I decided to hike alone from Cooper Landing to Seward, following the old gold mining route along the Russian Lakes and Resurrection River trails. When I got to the Resurrection River itself—two days and 25 miles into the trip—I inflated my packraft and launched into the swift, roiling river for a seven- or eight-mile final leg.

Swollen by recent rain, the river was running bank-to-bank, and I was repeatedly washed into the alders. It was a tough paddle. Even though the trip followed a popular route with a long history of travel, for me it morphed into an adventure that drew deeply on the strength and skills I had acquired through years of doing extreme backpacking trips and wilderness races.

Finally, I emerged from the wilderness and arrived at Exit Glacier Road more than 10 miles from the Seward Highway—where civilization waited with dry clothes and warm drink. I was cold, completely soaked, feeling thoroughly beat up. So rather than walk, I thought it would be easy to hitch a ride. Whenever I see backpackers in a situation like mine, I pick them up. First, I know how it feels to need that ride. Second, I like to hear about their adventure, to rekindle that feeling I used to get when I was in my prime adventure years.

A few minutes passed. No one came. So I started walking toward town, with my large backpack and paddles rising high from each side, and my ears pricked for oncoming traffic. Suddenly, I heard a car approaching, and I stuck out my thumb. The car in the distance had an out-of-state license plate. Visitors! (I love talking to visitors.) As it drove slowly in my direction, I could see there were only two people in the car. I was sure they would stop, and my heart soared. A big smile crossed my face.

The car continued on by and did not stop. As it receded down Exit Glacier Road, still moving slowly, I saw that it had New York plates.

Initially, I was very upset. (I really could have used that ride!) The best I could tell, someone from New York just didn’t understand the Alaskan way, the culture of helping others in a situation like that. But the more I thought it over, I also realized how a New Yorker might view a hitchhiker differently than an Alaskan. A strange person walking along the side of the road in the woods—someone with the appearance of a drowned rat wearing a large backpack festooned with oblong paddles—might seem a bit alarming. Or it might not be so obvious to someone visiting Alaska from the East Coast that passing backpackers on the highway shoulder 10 miles from town sentences them to a long march.

I Return Again, This Time a Family Man

A decade later, I would return to Exit Glacier Road with my wife and kids during one of our family summer adventures during a beautiful mid-July weekend. The happiness of that trip more than made up for the bittersweet memory of my first.

High summer is an exuberant time on the Kenai—when daylight lasts 20 hours, the salmon are running and the country practically riots with green. Not only did we decide to go to Seward for the weekend, we split up into two cars and brought along one of our videographers to record the moments forever. Our adventures—visiting the boat harbor, riding a cart behind a dog team through a budding forest, visiting the Alaska Sealife Center and exploring Exit Glacier beneath blue skies—ended up in a short film we called “Ari and Alana go to Seward.” Ari was almost 3 and Alana was 1. (Our third child, Adam, had not been born yet.) It became one of the most exhilarating family trips we ever took.

I think that Exit Glacier Road—close to where I sloshed out of the wilderness so many years before—was the highlight. Surrounded by the spruce forest that dominated my packraft journey, we stopped repeatedly along the 13-mile road for one mini-adventure after another. We photographed a moose browsing along the shoulder. We hiked a hundred yards out onto a gravel bar on the Resurrection River and built a huge campfire with all the plentiful wood that gets washed down from during spring and fall floods. But the climax of it all came at the end of the road, near the terminus of Exit Glacier itself.

I think that Exit Glacier Road—close to where I sloshed out of the wilderness so many years before—was the highlight. Surrounded by the spruce forest that dominated my packraft journey, we stopped repeatedly along the 13-mile road for one mini-adventure after another. We photographed a moose browsing along the shoulder. We hiked a hundred yards out onto a gravel bar on the Resurrection River and built a huge campfire with all the plentiful wood that gets washed down from during spring and fall floods. But the climax of it all came at the end of the road, near the terminus of Exit Glacier itself.

My Past & Future Connect

There’s a segment in that film of Ari crossing a small, braided stream just downstream from the ice. I’m carrying Alana. My wife, Yael, and I are holding Ari’s hand. And Yael exults:

Let me explain why this was such a big deal to me. When you spend years of your life exploring Alaska’s backcountry, you quickly realize that crossing rivers can be the most challenging and exciting moment of any trip. Frigid, fast and silty—rivers crisscross Alaska’s wilderness. They flow from the mountains. They surge from the foot of melting glaciers. No matter where you go, no matter how far you travel, virtually every itinerary brings you to a river. And that river usually must be crossed or navigated to reach your final destination.

My first wilderness race of 150 miles probably required 80 stream crossings. The crux of many backcountry routes often hinges on safely traversing a single, large and intimidating river. Sometimes you can’t paddle it—the river’s too shallow and rocky, or too dangerous. Solving this problem is both challenging and engrossing. You scout your route, reading the surface of the water and contours of the banks to find the shallowest, slowest place to cross. It’s dicey. I’ve successfully crossed rivers powerful enough to sweep a 1,500-pound horse off its feet. And I’ve been knocked down in innocuous-looking channels that didn’t seem worth a second thought. When you enter the stream, the water is always cold—squeezing your feet like a vise.

So, when Ari waded that little stream—one of his hands in mine and the other in my wife’s—it was a rite of passage.

So, when Ari waded that little stream—one of his hands in mine and the other in my wife’s—it was a rite of passage. It connected him to me and to moments in my life where I have felt most alive. It made me hopeful I would raise a boy who would come to share my own love of wilderness, who would grow to be competent in the backcountry, and with whom I might someday share intimate conversations around a campfire deep in the wilds.

After crossing the channel, we hiked upstream until we came close enough to touch a lower finger of ice from Exit Glacier. Most glaciers in Alaska are so remote that they require hours or days of arduous travel to reach. And yet here we were, a half hour walk up the gravel bars, intimately close to one of Alaska’s most famous glaciers.

A scene in the video captures the moment, with all four of us near the glacier. I’m holding the kids. We’re all smiling. To the kids, it probably felt no different from a snapshot of us playing on a swing set at the local park. But to me, my children’s first stream crossing and their encounter with glacial ice represented a milestone. And a harbinger of wilderness adventures we would share in the years to come. 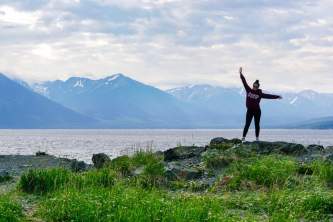 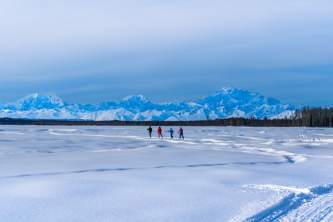 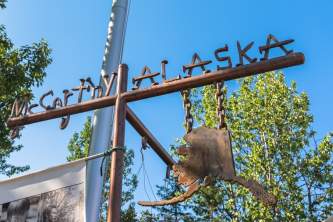 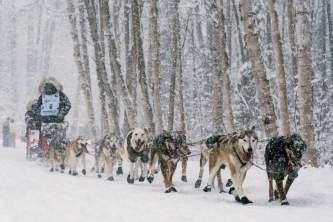